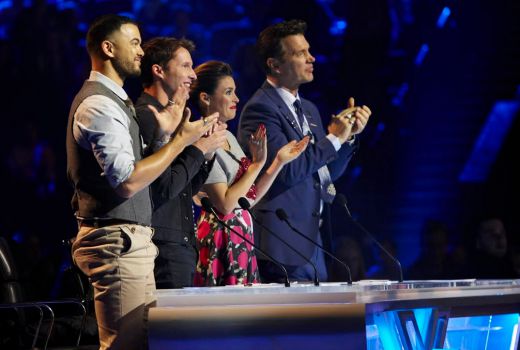 Guy Sebastian admits it: Reality TV talent shows are guilty of too many standing ovations.

“Yes we probably do,” he concedes. “But you’re watching a very condensed version of our day which maybe goes for 14 hours. And most of that is absolute crap. So if anything is remotely good we’re just compelled to stand up on our feet.

“The viewer probably watches and thinks, ‘Man, they are very easily excitable!’

“I don’t think they’ve seen we’ve just sat through an hour and a half of people being very underwhelming.

“So somebody who might not be (that great) might get us up on our feet and when we watch it later, we might think ‘That one deserved a standing ovation but not this one!’”

Added to the long hours of pedestrian performers, The X Factor judge says, is the euphoria of the Live environment.

“I guess it’s like anything. When you’re watching on TV compared to being in the room and surrounded by everyone’s energy, it’s obviously much more compelling in the Live setting,” he says.

“I am fairly conservative with my comments. I would never say ‘You will be the next huge thing on a worldwide stage.’ I know how hard that is to do. It takes a lot of work and a lot more than one television performance.

“Probably the most I would say is ‘You have the potential to be absolutely huge.’

“There are people who didn’t make it, that I thought were a sure Top 3. But they didn’t even make the Top 12.

“A lot of time you’re dealing with someone who is a ‘one trick pony’ who has used their party trick. But you get to the other stages of the competition and you throw them a challenge…. You quickly realise there’s not a lot more there.”

This year the Seven show appears to have uncovered some encouraging young talent. With a population of 23 million, a criticism that is frequently levelled at talent shows is that we have exhausted our talent pool. Sebastian, himself a talent show discovery, disagrees.

“I’ve said –both on and off the record- it’s the best volume of talent I’ve seen. Usually there’s a few fillers in the top 12 who I think will probably go. But it will be really hard with (this year’s) Live shows, because there are some really great talent,” he continues.

“There are always people who don’t audition because they don’t think they’re ready or good enough. I remember growing up I didn’t think I was anywhere near good enough until I was 22 and an Australian Idol commercial came up. I’d been travelling the world, I was in bands, I was an engineer –but I still thought ‘No way I would ever come close to winning one of those shows.’

“But my friends backed me.

“With The Voice and all these shows I thought ‘How are we still finding this talent?’ But it just came out in droves.

“It’s a testament to the show with people like Samantha Jade, Reece Mastin, and the international versions where people have done great things.

“If I was an artist and I was going to go on a show I’d want the format of The X Factor where the focus is on the artist.”

X Factor does indeed have a healthy strike rate of successful artists with winners including Samantha Jade, Reece Mastin, Marlisa Punzalan and Dami Im -nobody seems to mention Altiyan Childs anymore, let alone inaugural winners Random (on TEN’s 2005 season). Others who failed to win but have still enjoyed success including Nathaniel Willemse, Taylor Henderson, The Collective and Johnny Ruffo.

“One thing we are proud of is that it legitimately finds artists. It doesn’t work all the time, because there’s no 100% strike rate in this industry. But when you look at the track record on X Factorcompared to any other show it delivers what it promises: talent.”

The judges are hands-on with their artists, mentoring from styling and arrangements to performance. But the show’s format also dictates that the judges should favour their own over other contestants. Sebastian acknowledges it is part of the inherent drama but denies it diminishes any credibility.

“We have to remember it’s a TV show as well so we are trying to pit ourselves against each other and have ownership over our acts,” he agrees.

“But that rivalry is probably one of the few things that is manufactured. You obviously get very attached to your contestant, but behind the scenes we all talk about how we want the best person to win.

“If it came down to losing your artist over someone who you genuinely think should win, a lot of us would probably send out own artist home. Mel B’s already done it in the past.

“I’ve learned if you have a crack at somebody they end up getting more votes anyway!”

This year Boot Camp introduces a new ‘5 chair’ element in which each judge’s contestants must compete for one of 5 places to head to London and perform for creator Simon Cowell. It works like “musical chairs” where some 12 acts will perform for each judge who can only assign a chair to 5 acts.

“It’s very emotional and it’s like a rollercoaster, because they think ‘Yes I’m in, one step closer to going overseas.’ But then suddenly someone gets on stage and does a killer performance and they realise ‘Wow, that was better than mine, I probably will lose my seat.’

“Having to put them through it was pretty brutal and not something I enjoyed. It’s one of those moments where I think. ‘This is my job, I have to do this.’”

The X Factor airs 7pm Sundays and Monday – Thursday at 7:30pm on Seven.

The 5 Worst Network Pilots of the ...