BROOKLYN, N.Y. — He may have gotten the gunk out of his hair, but Seth Rollins couldn’t remove the egg from his face after his epic humiliation at the hands of Dean Ambrose and an air cannon loaded with Gak last week on Raw. The Lunatic Fringe’s desecration of both the Money in the Bank briefcase and Mr. Money in the Bank himself set Rollins into an epic tizzy at Raw’s beginning,  leading him to more or less dare Cena and Ambrose to come and get him. So, of course, they did; Cena from the stage and Ambrose from the crowd when Rollins tried to flee through the WWE Universe. But the combined might of Jamie Noble and Joey Mercury helped dissuade the two-on-one ambush long enough to provide Mr. Money in the Bank some safe harbor at the last minute. The timely appearance of The Authority also gave Rollins some extra protection for Raw’s main event, which would reform the uneasy Cena-Ambrose alliance against all three members of the corporate stable, Rollins, Kane & Randy Orton. 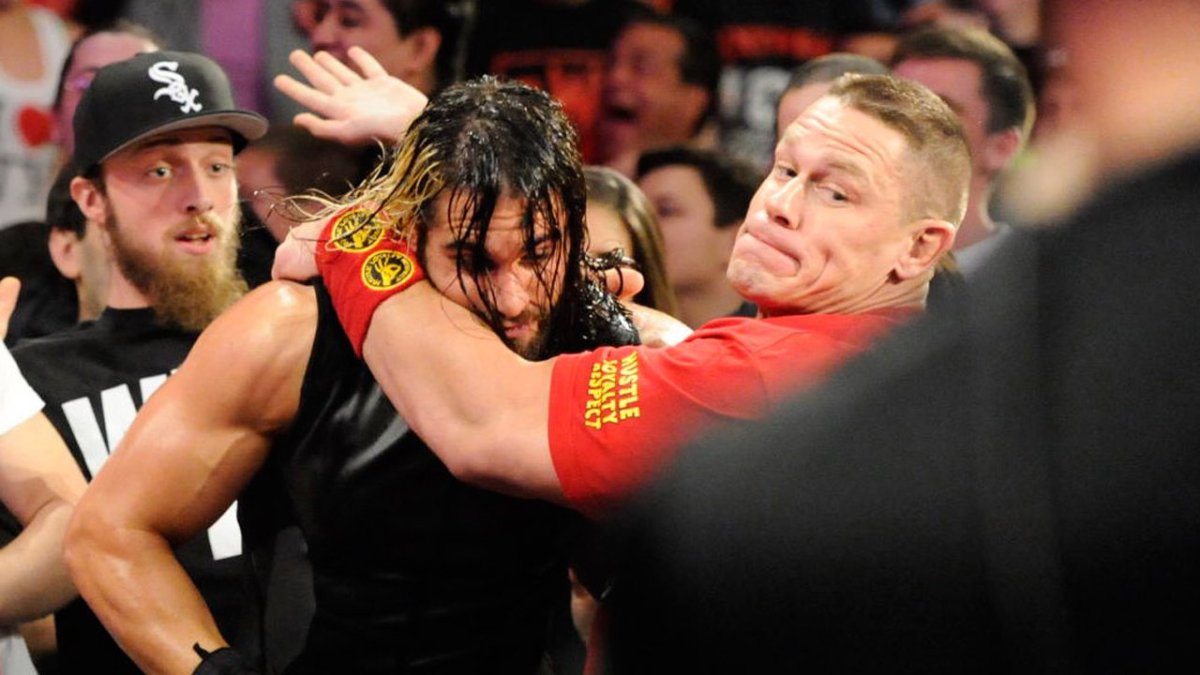 The out-of-this-world duo Gold & Stardust may not be long for it as WWE Tag Team Champions. The intergalactic duo has been dogged by The Usos at every turn since claiming the “Cosmic Key” for their very own, and the trend continued this week on Raw. The Usos’ latest one-up over the tag division’s resident wackos came in a Six-Man tussle that also featured Dolph Ziggler and Cesaro, currently involved in a dispute over the former’s Intercontinental Championship. The uphill struggle for the fan favorites began almost immediately when the champions and Cesaro jumped their opponents before the opening bell. By the match’s midpoint, a brawl had broken out and Ziggler and one Uso had already been hurled shoulder-first into the steel steps. The Showoff reversed the momentum against Cesaro, and a last-ditch attempt by Stardust to save the match was met with three simultaneous superkicks to the chin and a single, solitary top-rope splash for the pin.

Katie Lee and Hoda partied with the Rosebuds

Even the hosts of “Today” can appreciate a little party time, all the time. Kathie Lee Gifford and Hoda Kotb returned the favor from John Cena’s "Today" appearance this morning by dropping by the Barclays Center for Raw. The party-hearty hosts didn’t only gallivant all over the place with Adam Rose and the Rosebuds, but they also got a little rowdy when they smashed bottles over each other’s rear ends. The scuffle was nothing The Exotic Express couldn’t defuse, as a pair trust falls and the continued presence of The Bunny ensured a happy exit for the daytime duo. 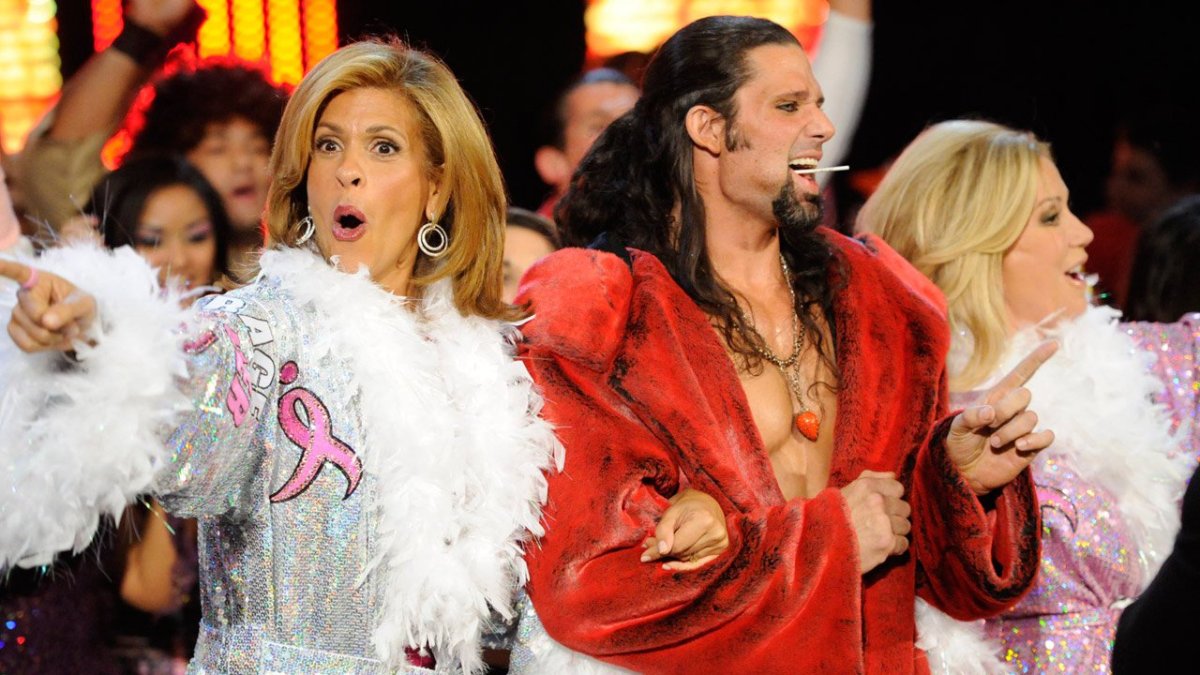 Better Bo-lieve it: The divisive Bo Dallas is now 3-Bo over Mark Henry, thanks to a technicality that allowed the former NXT Champion to complete an unlikely hat trick against The World’s Strongest Man. A pin and disqualification had bolstered Bo to a pair of victories over Henry going into Monday’s Raw, but it was a count-out — bestowed when Henry got tripped up during an outside-the-ring brawl and Dallas scurried back to beat the 10-count — that gave Bo the win in the third match, too. The win turned out to be merely Dallas’ price of admission into his third-consecutive Hall of Pain visit; Henry gave chase to the inspirational one after the match, though it was unclear whether Bo escaped the arena intact. If he Bo-lieves enough, he just might. 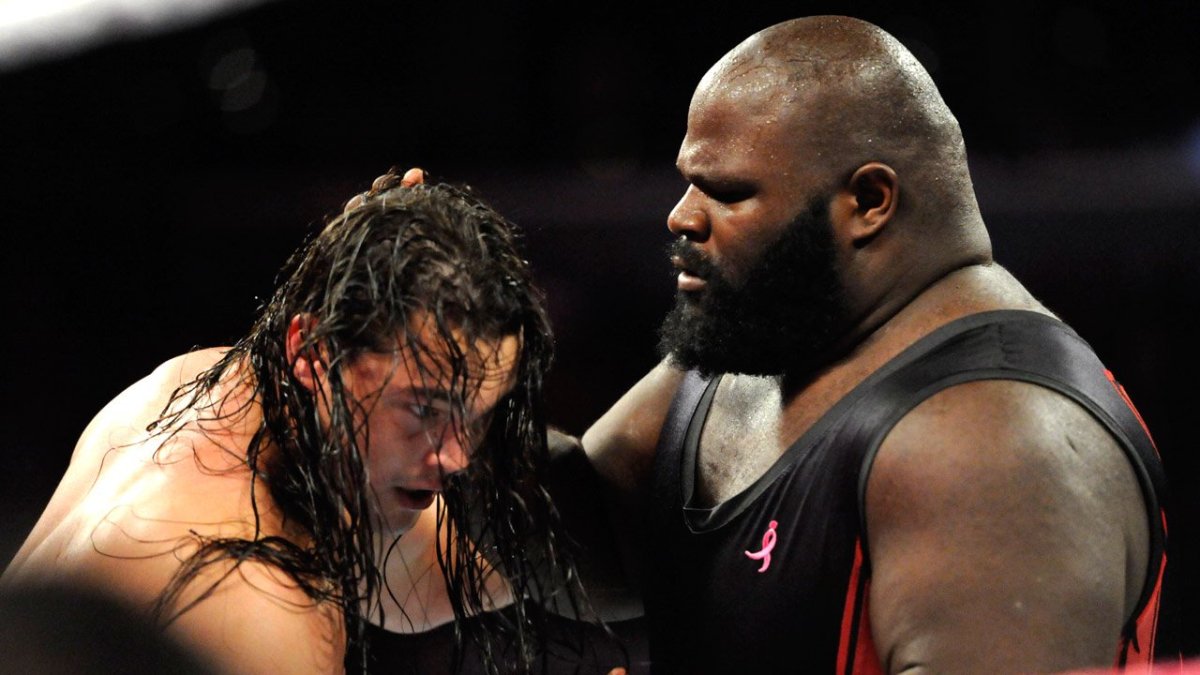 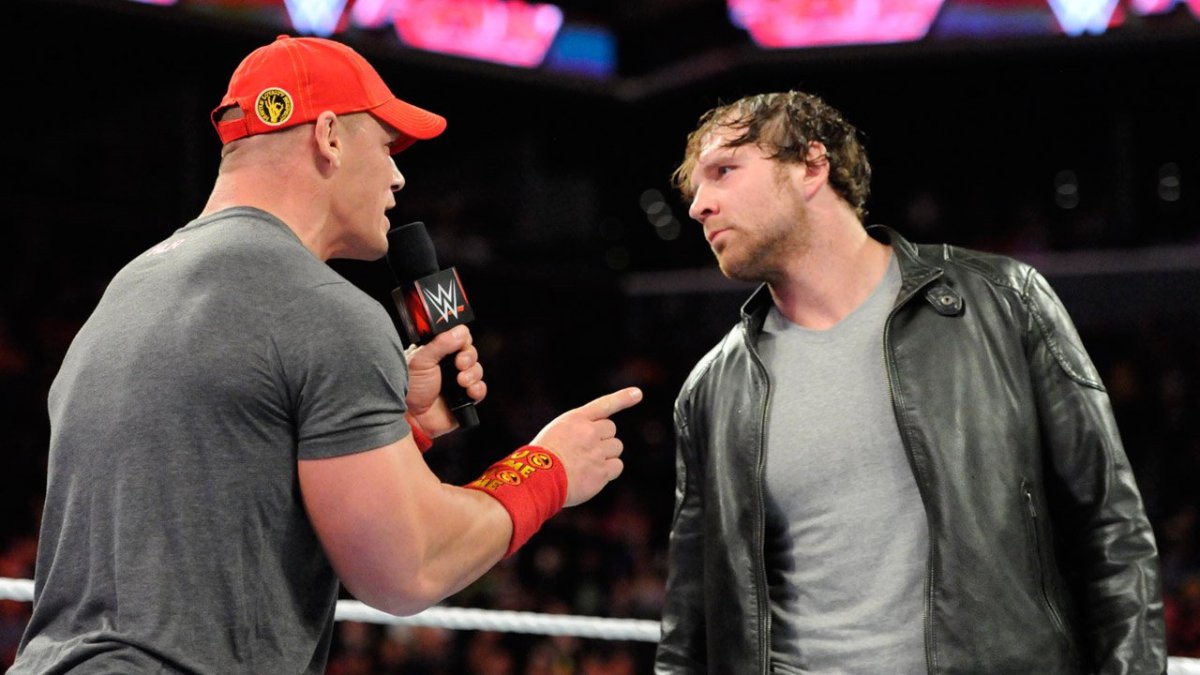 Who among us hasn’t wanted to drop what we’re doing and go to Coney Island? Granted, we’re not all Dean Ambrose, and the task we’re abandoning doesn’t involve the main event of Raw. But still, The Lunatic Fringe’s march into folk-hero status likely got its biggest boost when he left John Cena high and dry — as payment for the Cenation leader’s abandonment of him on SmackDown — in favor of seeking out a ticket on the world-famous Cyclone. As for Cena, he was left on a different kind of island as he suddenly faced a three-on-one battle against The Authority in Raw’s main event. Hopefully his Never-Give-Up philosophy will be enough to keep him in one piece.

Brie Bella might have this whole overcoming-the-odds thing down as well as her husband does. Forced for a second week to compete in the same unwinnable matches as her sister Nikki was over the summer, the bride of Bryan stepped up and won, this time besting Summer Rae with one arm literally tied behind her back. What started out as a one-sided destruction of the “Total Divas” star by, well, her fellow “Total Divas” star turned on its head when Brie tripped her opponent up in the ropes and channeled her husband with a running knee to the prone Summer. The move earned her the win and a well-earned “Yes!” chant that the Brooklyn crowd was all too happy to join in on while Nikki fumed on the ramp. 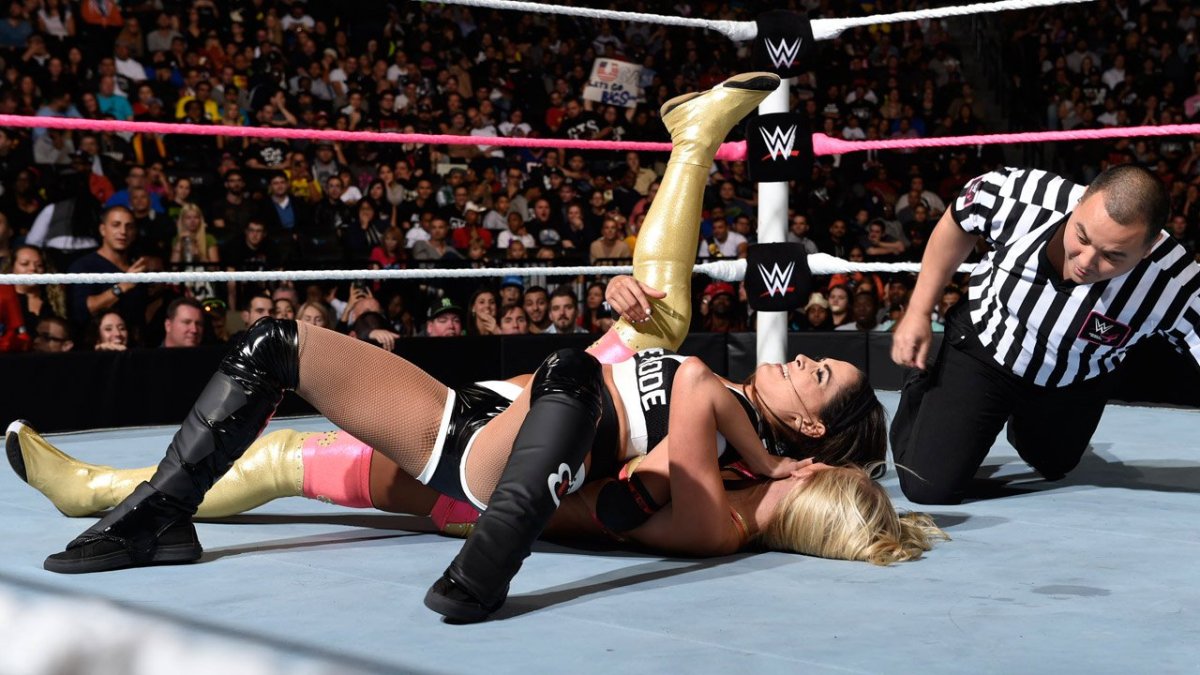 Brie Bella def. Summer Rae with one arm tied behind her back

As last week’s Raw showed, Tyson Kidd is a fan of his music, even when he’s ostensibly slated to be a ringside enforcer. Well, the Hart Dungeon graduate got a beat of a different kind thanks to Jack Swagger in Kidd’s second high-profile contest since a wickedly competitive stint down at WWE NXT. A win over Kofi Kingston on WWE Main Event found Kidd cockier than usual going into battle against The Real American, but Swagger quickly silenced his pesky neighbor from the north after Kidd used his wife Natalya as a human shield to gain momentum. Swagger battled back from his deficit to the former WWE Tag Team Champion and hurled him off the ropes, transitioning to the Patriot Lock in midair and putting the Kidd to bed. 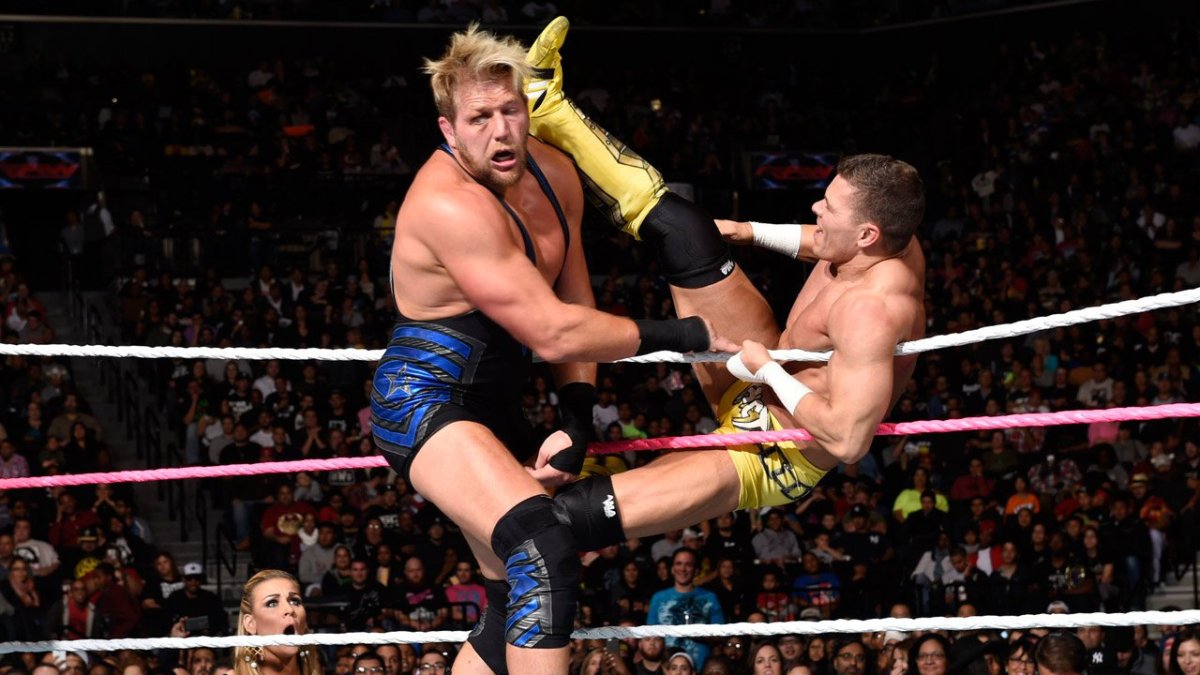 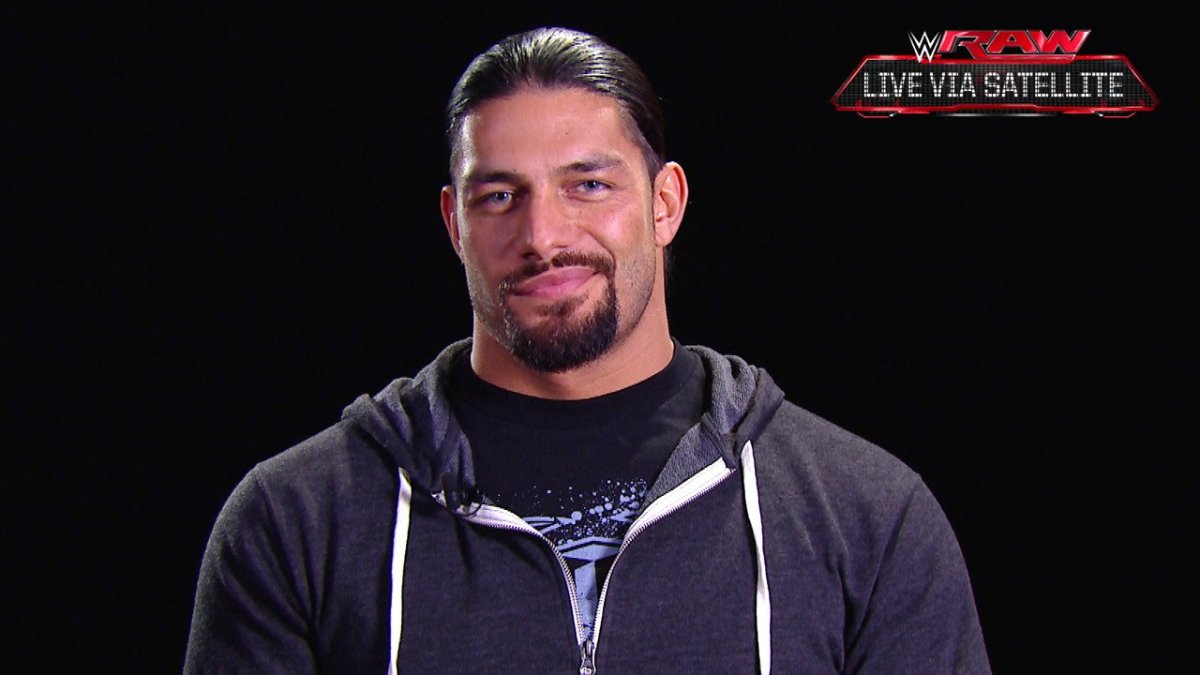 Welcome back, Roman Reigns. The juggernaut made his first appearance on Raw since a hernia felled him at the peak of his powers and, unfortunately, he didn’t have much to report. He has made progress and his movement has improved, but Reigns was unable to commit to a return date. The former WWE Tag Team Champion’s attitude remained as strong as his Superman Punch, though, and it’s only a matter of time before the “Roman Empire” resumes its dominance.

In the jungle, the bull is stronger than the gator. El Torito, having been gator-rolled into oblivion by his longtime nemesis Hornswoggle — now competing in the guise of Slater-Gator’s mascot “Mini-Gator” — renewed his epic rivalry with the pesky ’Swoggle and came out smiling on the other side. It was some well-plied misdirection that disoriented “Mini-Gator” and caused him to attack his own corner men; Torito capitalized with a moonsault and “Mini-Gator” was sent slithering back to the swamp from whence he came. 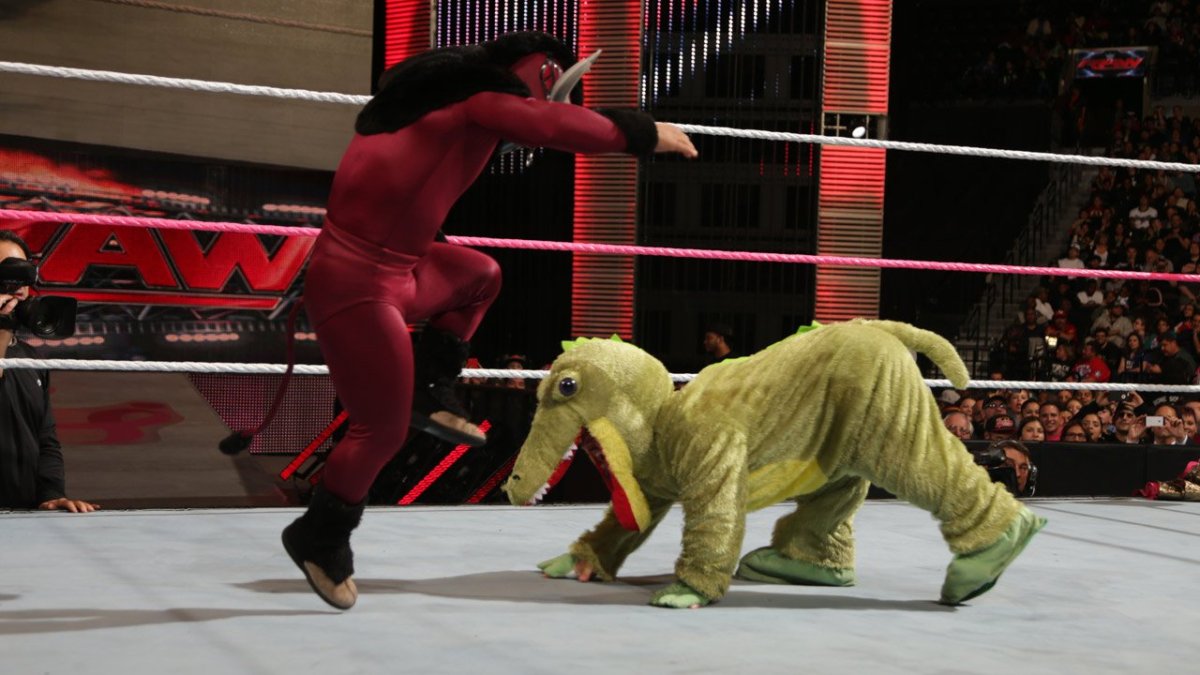 The Rock confronted Rusev and Lana

With Big Show felled by that most unlikely of opponents — office-mandated sensitivity training — all Rusev and Lana really had to do to rub salt in the giant’s wounds was show up on Raw. With no one to tear down their flag, the Russian coalition let their pride flow proudly, delivering an ominous challenge to Big Show to present himself for crushing. It would take a force of nature to make the Russians stop and take notice at this point. So The Rock came out. To the surprise of the entire tri-state area, The Brahma Bull answered Rusev’s open challenge in Big Show’s stead and the Russians made like the catchphrase said and shut their mouth ... until Rusev stepped to The Great One and threw down against the jabroni-beatin’, pie-eatin’, trailblazin’, eyebrow-raisin' People's Champ. Somewhat predictably, The Great One drove The Super Athlete from the ring with a series of electrifying right hands. So the Russian is mortal after all. Can Big Show pick up where The Rock left off? 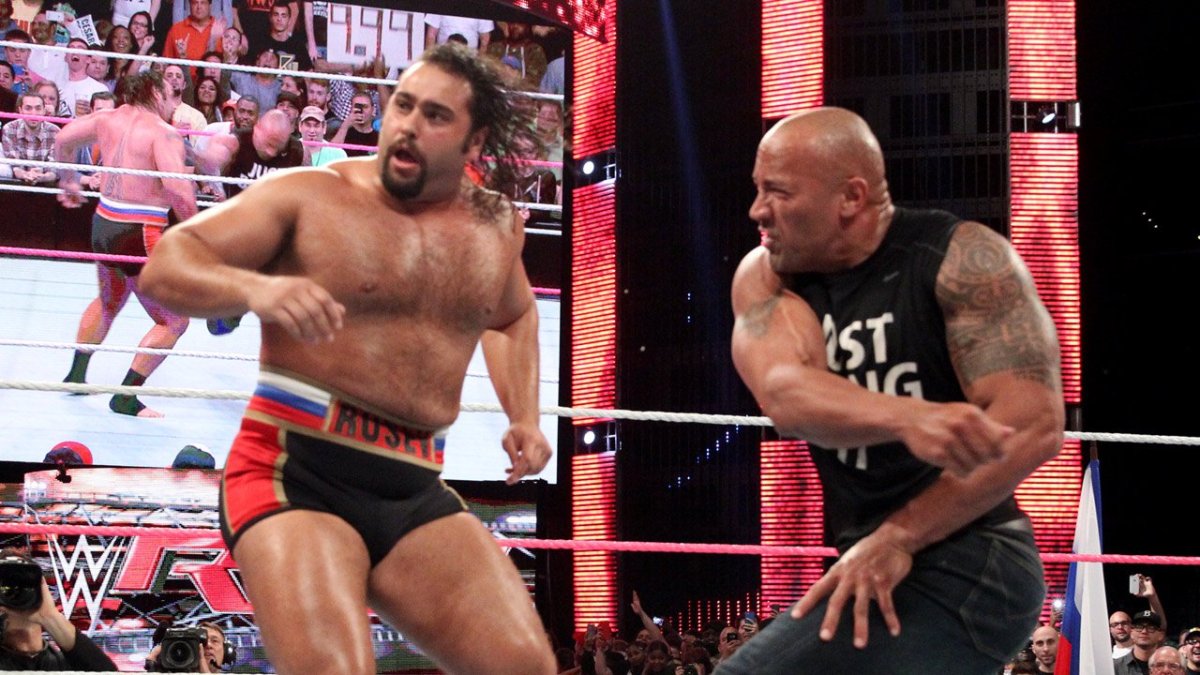 With Alicia Fox now holding the coveted title of Paige’s Best Friend, it was only a matter of time before The Diva of Tomorrow and her batty BFF teamed up in an official capacity to torment the reigning Divas Champion, AJ Lee. And even though AJ conscripted Emma into her corner to battle the sinister sister-Divas, the champion wasn’t all that impressed with the Diva’s oddball showmanship, abandoning Emma after she opted to dance rather than cover a reeling Alicia Fox. Paige, who knows Emma quite well, was lying in wait with the Ram-Paige, and that was that. 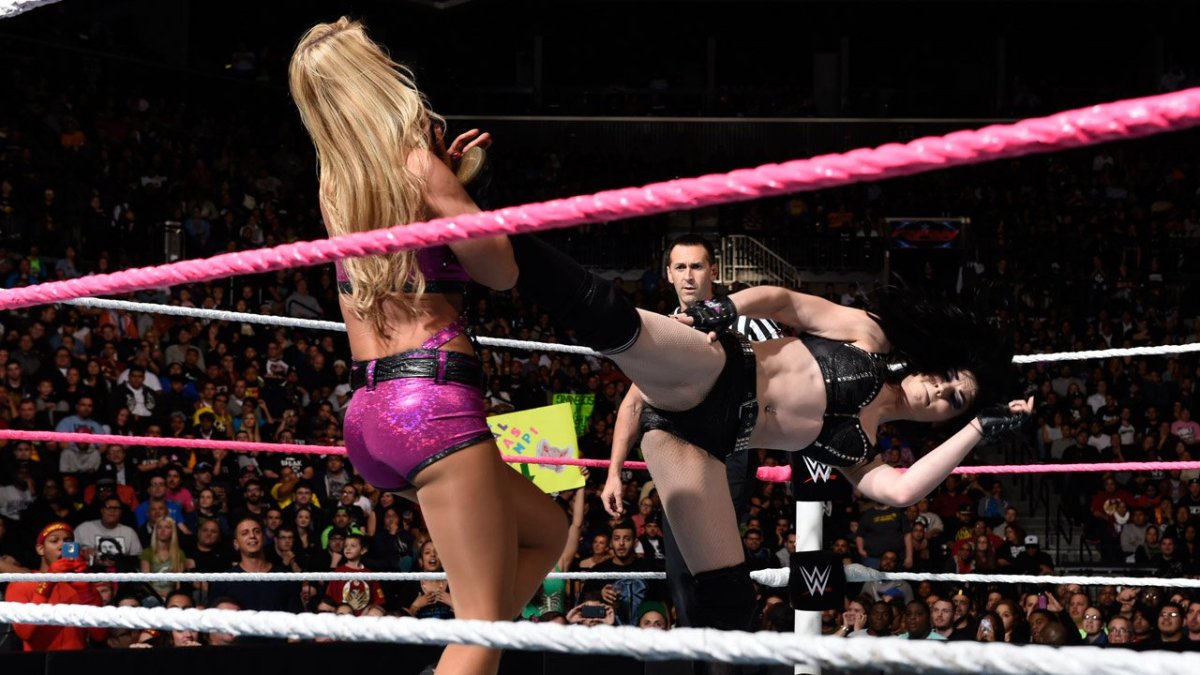 Every great movie star gets to play the underdog at least once, and The Miz very likely got his own “Rudy” moment on Monday Night Raw when he knocked off U.S. Champion Sheamus under Brooklyn’s bright lights. The match was orchestrated by Director of Operations Kane as a punishment of sorts for Miz’s insolence against The Authority. For a good stretch, it seemed like Miz was slated to get his just deserts, provoking Sheamus into a rage by slapping him across his moneymaker, or the Irish equivalent thereof.As all stars do, however, he had some help from his stunt double when the stakes were highest. “Damien Mizdow,” who had been humiliated by the Irishman the previous week, intervened by taking a Brogue Kick in The Awesome One’s stead. Miz capitalized on his stunt double’s work, cheap-shotting Sheamus and rolling him up for an Oscar-worthy ending. 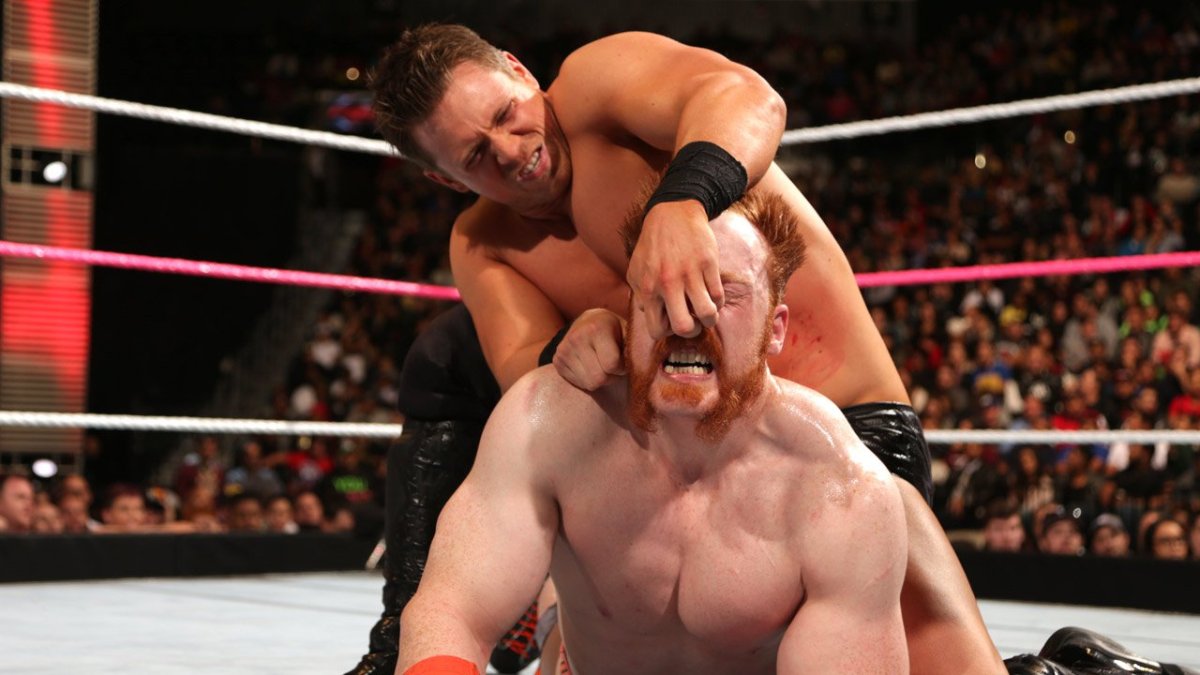 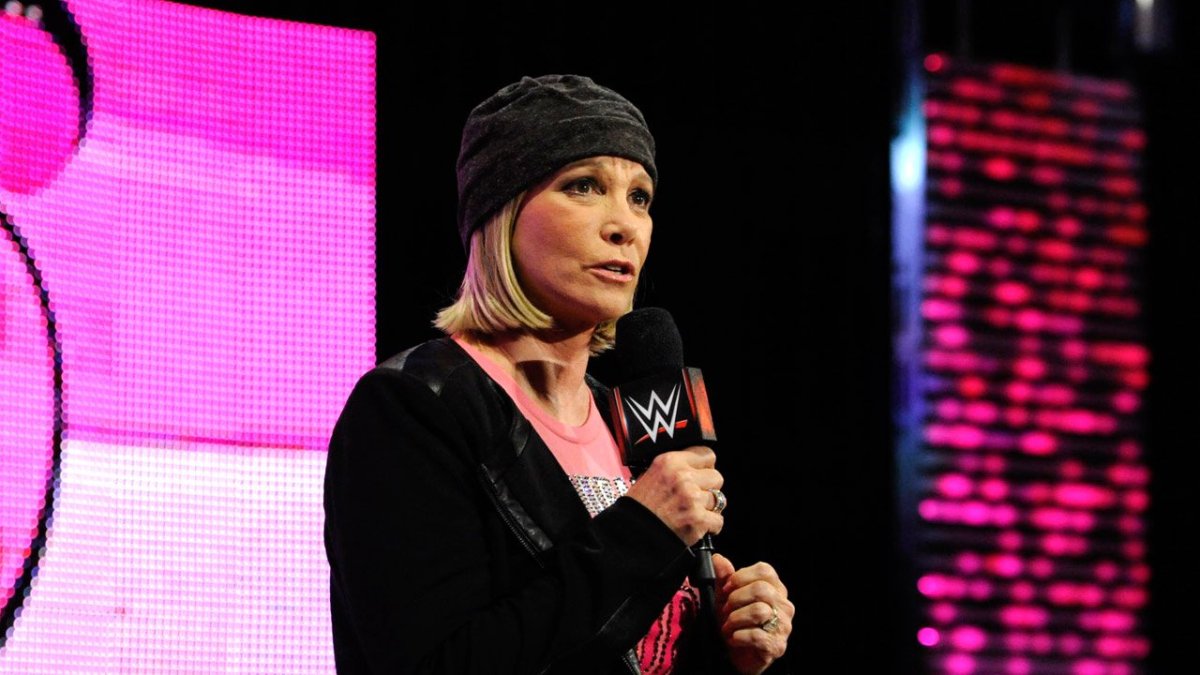 Having graced the cover of the current issue of People magazine, journalist and author Joan Lunden took some time to appear on Monday Night Raw and further discuss WWE’s partnership with Susan G. Komen. Lunden, who is currently battling breast cancer, delivered an emotional address about her journey and the importance of early detection. She also thanked the WWE Universe for their financial, emotional and moral support, introduced a group of survivors seated in the front row to the WWE Universe and viewers watching at home, and called everyone attending and watching to rally and help make breast cancer a thing of the past. Her heartfelt speech concluded with a doff of the hat from John Cena, who joined Lunden at the end of her address.

John Cena loves him some odds to overcome, and the Cenation leader found himself in quite the conundrum when his scheduled partner Dean Ambrose left him to the mercy of The Authority in a 3-on-1 Handicap Match that devolved quickly into an unmitigated beating. Triple H had conceded that Seth Rollins would start the match, but The Aerialist quickly tagged out and Kane & Randy Orton set to tenderize the 15-time World Champion. By the time Rollins did tag in, Cena was all but served on a platter and a three-on-one beating earned him a hollow disqualification win, yet it turned out the strongman wasn’t as alone as he thought. After a few moments of butchery, Ambrose returned and quite literally hot-dogged his way to the ring, utilizing a weaponized street vendor’s cart and all the goodies contained therein to administer a beating from which the corporate cabal could not, erm, ketchup. The party didn’t exactly cut the mustard for Triple H and Stephanie McMahon, though. The Authority drove perhaps the greatest wedge yet between the unsteady tandem by announcing a Cena vs. Ambrose contest for WWE Hell in a Cell, wherein the winner would get a coveted chance to face Seth Rollins himself inside the place where rivalries are settled forever. It was an announcement that neither Ambrose nor Cena seemed too happy about, though Ambrose certainly seemed to relish the double-arm DDT to the Cenation leader that kicked off their rivalry in earnest. 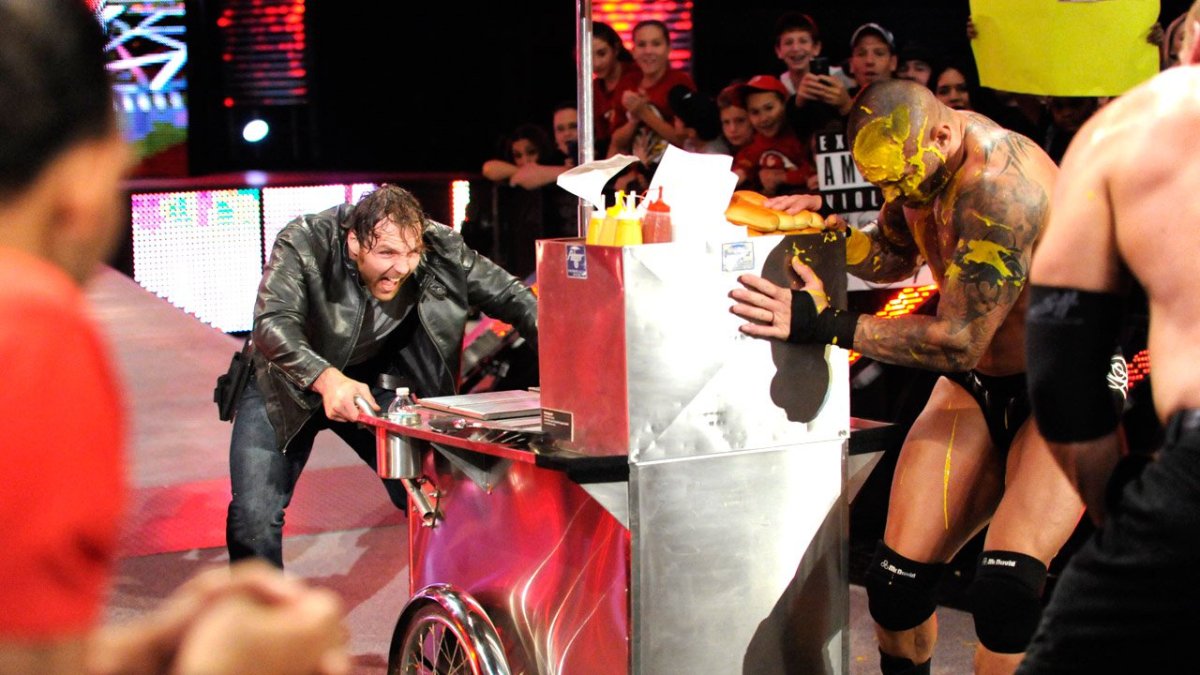 VILLAIN OF THE WEEK!