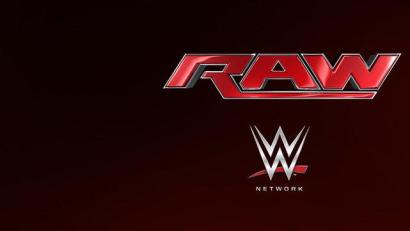 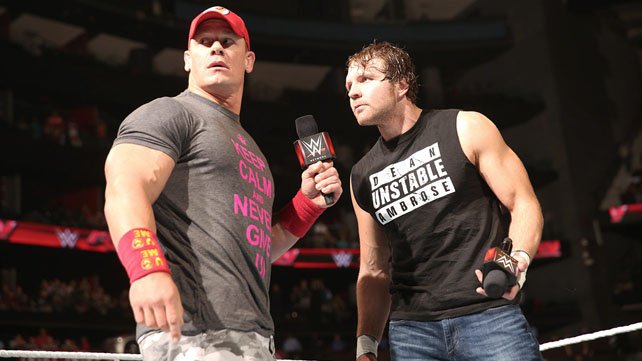 ATLANTA — If Hell is other people, then John Cena and Dean Ambrose don’t even have to wait two weeks before one of them goes there: The Lunatic Fringe and the 15-time World Champion’s destinies are so intertwined at this point they’re practically both in Mephistopheles’ clutches already. Their predicament didn’t get any better on Raw, either: Despite dropping each other across the previous week, tensions between the two Superstars were at an all-time high as their battle for the right to face Seth Rollins inside Hell in a Cell approaches. The Authority decided to have some fun with that, forcing Cena & Ambrose to team up against The Usos and Gold & Stardust in a Triple Threat Tag Team Match. Somewhere, Teddy Long is smiling.

Perhaps the enemy of John Cena’s enemy truly is his friend. Forced to team under duress with Dean Ambrose yet again, the Cenation leader and The Lunatic Fringe marshaled their uneasy alliance to a victory over the current and former WWE Tag Team Champions, proving they may have been formidable titleholders themselves in some alternate WWE Universe.

Thanks to a timely tag from Stardust, however, Cena & Ambrose found themselves out of the fight while the four brothers had it out. Ambrose created an outside-the-ring brawl that forced one of the Usos to tag in Cena, who summarily cleaned house, though not without a bit of top-rope one-upsmanship from Ambrose. The twosome dispatched of Gold & Stardust simultaneously, with Cena scoring the decisive pin … and then, having seen what they can do as allies, The Authority sped up their trip to the inferno, moving Cena and Ambrose’s No Holds Barred Contract on a Pole Match to later that very same evening.

AJ Lee may be more open to the idea of a BFF than she was last week, but it certainly won’t be Layla who holds the distinction. After abandoning Emma mid-match against Paige & Alicia Fox, the Divas Champion tried her luck with Layla as her partner against The Diva of Tomorrow and her wacky better half, and the idea worked pretty well for a stretch. That is, until Layla straight-up ditched the champion at a particularly dire moment in the match.

It was no big deal for AJ, though, who smashed Alicia Fox with a Shining Wizard for the pin and then turned her attention to Layla for a post-match mauling. 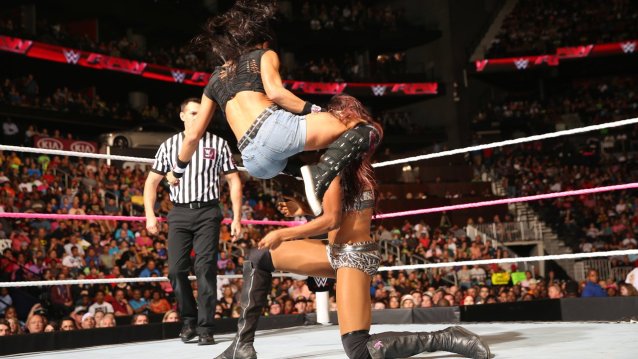 A strong start out of the gate has turned into a rough couple of nights for Dolph Ziggler, who’s now suffered two straight losses as Intercontinental Champion — one to Rusev on SmackDown, and now another to Randy Orton on Raw. Preparing to face the Superstar who does not earn the right to face Seth Rollins inside Hell in a Cell, Orton used the bout with Ziggler as a test of his own personal brutality, and did not disappoint those who hoped The Viper would make its return.

Ziggler — with perennial challenger Cesaro perched at commentary — rose to the occasion and gave Orton a run for his money. However, the appearance of Seth Rollins at ringside gave The Apex Predator an extra incentive to bring his A-game and Dolph’s late-game superkick was rendered null when Orton reversed the Famouser into a breathtaking, airborne RKO. And yet for all Orton’s mastery, it was Rollins who got the last word with a Curb Stomp to The Showoff’s skull that left The Viper uncharacteristically speechless.

The Authority’s “Hell”-bound golden boys went two-for-two on Raw after Seth Rollins defeated Jack Swagger, giving himself a big win to help carry him toward the place where rivalries are settled forever. Defeating Swagger was a surprisingly grueling task for the fleet-footed Mr. Money in the Bank, whose aerial attacks initially paid small dividends against the power maneuvers that tossed him around like a flour sack.

The presence of Randy Orton at ringside didn’t put Rollins’ mind at ease, either, but what did save The Aerialist was a superkick that knocked the kneeling Swagger unconscious, and the roll-up moments later that denied The Real American a surefire victory. However, it was Orton’s post-match RKO to the former World Champion that nearly brought the two company men to blows before cooler heads prevailed … at least this time.

Is a win a win if you’re not conscious long enough to remember it? That, perhaps, is the question best posed to Rusev, who rebounded from a dressing-down by The Rock to defeat Big Show in a dubious manner … and then got knocked out for his troubles only moments later. Suffice it to say, sensitivity training didn’t exactly pacify The World’s Largest Athlete, who promised to KO the Russian and quite literally came out swinging (and kicking, and chopping, and tossing), reducing The Super Athlete to little more than a plaything for the majority of the match. 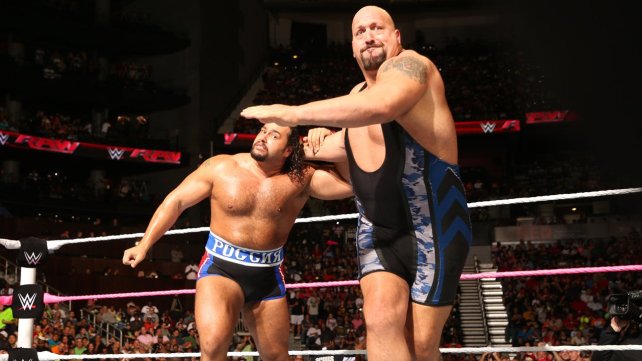 The Russian juggernaut found separation with an astounding dropkick and was able to tenderize Big Show’s back in a long slog toward the Accolade, which Rusev eventually managed to lock in. Mark Henry’s arrival – meant to energize Big Show – instead cost the giant the match when The World’s Strongest Man attacked Rusev to save his friend, causing a match-ending DQ in the process. Despite a brief disagreement, Henry and Show quickly found common ground and cornered The Super Athlete at ringside, at which point the giant delivered the fateful fist to Rusev, felling “The Fist of Russia” for love of Americans and sensitivity trainers everywhere.

This whole stunt-double business has been a boon for The Miz, who has used “Damien Mizdow” to frustrate U.S. Champion Sheamus at every turn since failing to recapture his own Intercontinental Championship from Dolph Ziggler. This week’s installment of embarrassment for The Celtic Warrior culminated in a bizarre count-out defeat at the hands of The Awesome One, who broke out a little Twin Magic to confound the Irishman after Sheamus chased both Miz and Mizdow beneath the apron. Seeking the original Miz, the Irishman instead produced Mizdow, who distracted the Star-Spangled champion long enough for Miz to beat the referee’s 10-count back to the ring. You’re welcome.

Cameron gave Real Housewife of Atlanta NeNe Leakes a little too much lip, and the rest of the “Total Divas” crew responded accordingly. Refusing to let a fellow reality star be disrespected, Brie Bella, Natalya & Naomi (with Rosa Mendes as cheerleader) united against Nikki Bella, Summer Rae & main offender Cameron in what was ultimately a winning effort that came down to a battle of the Bellas after a bench-clearing brawl that left the Divas strewn all over Atlanta. What looked to be a repeat of last week’s humiliation on WWE Main Event turned around in a hurry for Brie when she escaped the Nikki Rack Attack and struck with a facebuster to pin her sister, much to the delight of NeNe and the rest of the “Total Divas.” 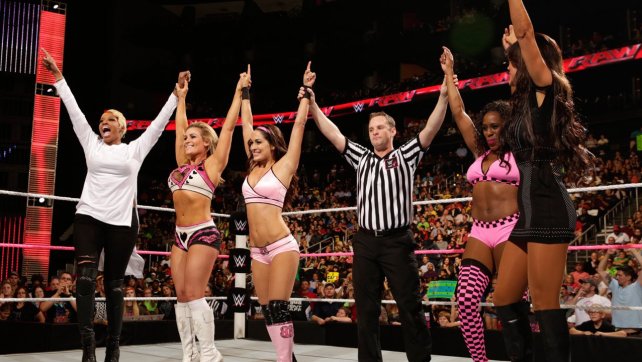 Well, well, well, Dean Ambrose is going to Hell. Or maybe it’s Seth Rollins who is headed straight to the pit, since Mr. Money in the Bank’s former brother-in-arms prevailed over John Cena to capture a contract guaranteeing him a spot in the Cell against Rollins to settle their rivalry once and for all. (Cena, by the way, isn’t exactly getting off easy: He may not have Rollins but that just means the 15-time World Champion will face Randy Orton in the steel structure instead.) 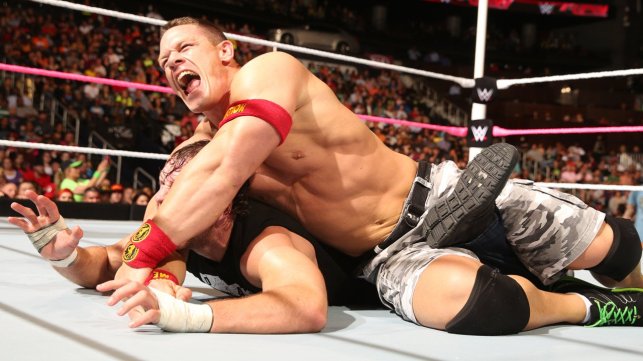 For a while, it seemed like Ambrose was more interested in punishing Cena than claiming his prize; The Lunatic Fringe battled his opponent up the ramp and absorbed as much damage as he inflicted. Cena claimed the advantage by using Ambrose himself as a fastball special against The Authority, who had gathered at ringside, but the former U.S. Champion proved himself to be much less unstable than his T-shirt would have you believe: While Cena preoccupied himself with his corporate foes, Ambrose clambered up the turnbuckle and snatched the contract for his own. Next stop? Hell itself.

Dean Ambrose def. John Cena in a No Holds Barred Contract on a Pole Match to earn the right to face Seth Rollins inside Hell in a Cell