“Fox’s whole approach is ‘we’re the grievance-filled underdog against the establishment and elites; Trump is using Jiu-Jitsu to try and turn things against the very network that invented it,” veteran journalist Mark Feldstein tells TheWrap

It’s Donald Trump’s world, and Roger Ailes is just living in it.

That’s the message Trump sent the Fox chairman on Monday when he ended his ceasefire with the de facto king of conservative media. Trump’s latest round of figurative shots fired at network star Megyn Kelly — and Roger Ailes’ bold, forceful response — sets up whatTheWrap previously reported as the real 2016 campaign: Trump vs. Ailes.

“It’s always hard to get inside the head of Donald Trump,” veteran reporter Mark Feldstein told TheWrap. “The irony is he’s almost taking a page from the Murdoch-Ailes playbook in his campaign in that Fox’s whole approach is ‘we’re the grievance-filled underdog against the establishment and elites; Trump is using Jiu-Jitsu to try and turn thing against the very network that invented it.”

While the media and political pundits collectively predict Trump’s war against Fox is suicidal for his White House hopes, Feldstein said not so fast.

“He’s not doing this blindly; he knows what he’s doing and there’s a calculus behind everything he’s done and every time he says something that’s more and more wild, everyone predicts that’s the end of him, but he only grows stronger. The conventional wisdom is it’s suicidal, but everything Trump’s done that conventional wisdom said was suicidal has only helped him.”

Feldstein, who teaches journalism at University of Maryland, suggested the latest Trump-Fox fight might be his big play for the angry, alienated white male vote. “He’s sort of criticizing Fox for employing Megyn Kelly and letting her get away with, as he put it, unfair treatment.”

Trump might be going after a particular slice of the electorate, but going against the voice of the GOP is much bigger than just angry, white men — it’s a shotgun pass for the growing anti-establishment Republican voter, whom Trump is betting big on by hoping they view Fox News as the personification of the establishment. 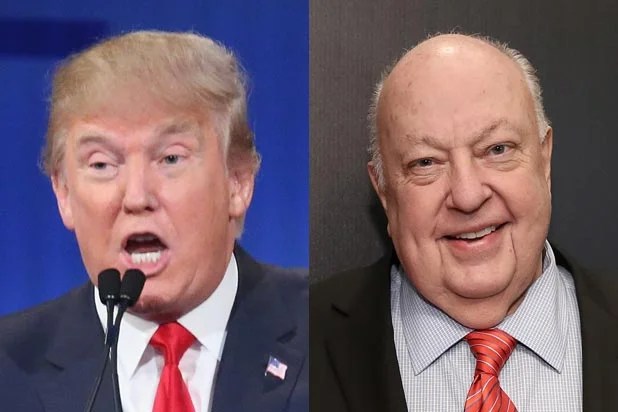 The Trump supporter is the Fox News viewer on steroids — fed up with the GOP congress and not-conservative-enough Republican presidential contenders. And sensing that Rupert Murdoch and Ailes have no interest in Trump’s candidacy being anything more serious than a short-term ratings boon, Trump made the calculated decision to fight the machine; a machine that aside from its brief romance with the Tea Party, is the establishment.

Hell, Fox News even dubbed Trump a one-man Tea Party machine (the network declined to comment for this story).

But Christopher Hahn, a radio host and former aide to Senator Chuck Schumer, believes Trump’s battle against Fox will backfire.

“Never pick a fight with someone who buys ink by the barrel or pixels by the freight car load,”. “He’s picking a fight with a multimedia giant. You can never win that fight.”

But Trump has won every fight so far: against illegal immigrants, against war hero John McCain, against Fox News after the first GOP debate, and of course, against Jeb Bush and the rest of the Republican candidates who were supposed to be leading the pack.

And in the full-on war between Trump and Fox News, the Donald’s success or failure rests with Ailes.

What happens when Trump stops going on Fox News, like he did the last time around, and the ratings take a dip while other networks hosting Trump soar? Will the legendary ratings hound still stand with his star Kelly, or backpedal in order to squeeze every last ounce out of the Donald orange?

“In a way you can ask the same question about both Trump and Fox: Which really matters more, their business interest or their political advancement?” Feldstein said, concluding that the more Trump injects Fox into the 2016 arena, the more it legitimizes Fox as a political player rather than just a “marginal network of crazy ideologues.”

To find out which set of ideologues wins the war, one figure remains out front as a media star and the champion of fed-up voters.