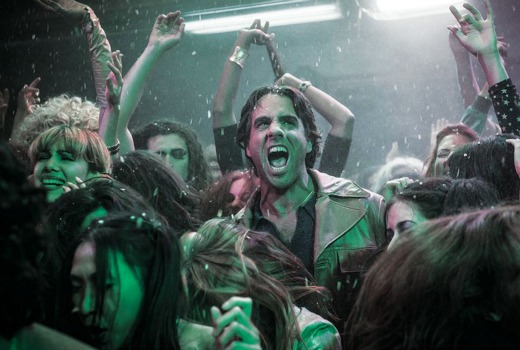 Vinyl is to television what Velvet Goldmine was to cinema: an excessive, theatrical and raw opus to the 1970s.

HBO’s 10 part miniseries takes place in New York predominantly in 1973, but there are flashbacks to the 1950s seen through the eyes of American Century record exec Richie Finestra (Bobby Cannavale).

Finestra wields great power, not dissimilar to Empire‘s Lucious Lyon. He is a short-tempered visionary desperate to find the next breakthrough artist, and to close a deal with a German conglomerate. He is also prone to all the trappings of the music industry.

In the opening scenes Richie is snorting cocaine off a car mirror when he is drawn to a nearby warehouse thumping with music and frenzied kids from the street. Creatively shot at tilted angles by director Martin Scorsese, and marked by Richie’s heavy breathing, it’s a distinctive opening.

Scorcese is a co-executive producer and co-creator of Vinyl with Mick Jagger, Terrence Winter (Boardwalk Empire) and former Rolling Stone journalist Rich Cohen. Their deep experience gives Vinyl authenticity, especially in its music. Half the fun in watching this in trying to guess who the musical acts are based on. There are artists in rock, glam-rock, blues, disco and early stages of punk and hip-hop. There are also specific references to acts such as Led Zeppelin, while the soundtrack includes artists such as Slade, Mott the Hoople and Otis Redding.

But its Jagger, who also serves as Executive Music producer, who will loom large over the musical acts here. As young bands complain about royalty splits (“I’ll be in my room doing to those birds what you’re label is doing to me!”) it’s hard not to hear the voice of experience. Son James Jagger also has a minor role as an emerging rock singer.

Richie stops at nothing to succeed, ordering his suits to ‘payola’ their way to chart success (“Buy us some charts. Inflate the f*** out of the sale numbers!”) and going all out to appease a powerful DJ who threatens not to play any of the label’s albums because he is pissed with Donny Osmond (seriously).

There is a flashback to his early days in the music industry when managing talented young singer Lester Grimes (Ato Essandoh) in a deal that ended badly and arguably set him on a hollow, if successful career.

“Musicians ain’t your friends kid,” he is told. “They’re products.”

Home life is not much better for Richie, with wife Devon (Olivia Wilde) unimpressed with his excessive ways.

While Vinyl is marked by sex, drugs and rock and roll, there is also euphoria, violence, nudity, strong language and even a bullet fired at a TV set. Women don’t come off too well in the opening 2 hours, frequently playthings of powerful men, sometimes the target of misogyny and under-utilised as characters in a male-dominated universe (the latter is the main reason I held off a 5 star review).

But Bobby Cannavale gives a tour-de-force performance as a powerful record exec who will be forced to face the consequences of his choices. Start writing the acting nominations now, it’s the best thing he’s done.

Scorsese also does not disappoint. Locations veer from graffiti subways to art deco offices and backstage loading bays. The final scene is quite spectacular, and not to be spoiled here.

Vinyl puts the needle on rock music, and injects another needle into its tattooed, sweaty arm. Don’t miss it.

Vinyl premieres 3:30pm Monday on Showcase and is repeated at 7:30pm.

What kind of home entertainment systems do ...