Home›U.K. Shows›Thelma Barlow remembers Victoria Wood: It was amazing to watch her on set

Thelma Barlow remembers Victoria Wood: It was amazing to watch her on set

Friends and colleagues of the late Victoria Wood are paying tribute to the much-loved writer and performer in a special BBC1 series Our Friend Victoria.

How do you feel to be part of the show paying tribute to Victoria?
“I am honoured to be part of it. Her life and work touched so many people and it was a unique experience to work with her. She died so young, but she packed so much in. She was the most hard-working person I have ever worked with, every minute was filled with that creativity and humour. Her family must be hugely proud of her because her contribution to laughter and lifting spirits has been enormous.”

When did you first meet her?
“I met Victoria socially way before I worked with her. I knew her through Anne Reid, but also I first met her at a charity concert in Rochdale. This unknown person in her early twenties called Victoria Wood sat at the piano and sang a couple of songs and she was very good and you think, ‘She is going to make something of this talent’. It was very notable even then.”

Do you have a favourite memory of working with her?
“Because she had done stand-up, she would do the warm-up for the audience before the recording of dinnerladies each week. She would go out dressed as Bren and for 15 minutes she would have them in the palm of her hand and then she’d bring us all on one by one and say something daft about us and then she’d walk onto set and be in character seamlessly. It was amazing.“

What was the thing about dinnerladies that captured the imagination?
“Oh people still talk about it and tell me they watch it or have it at home. Apart from her writing this collection of characters, it was the casting, there wasn’t a weak spot. Everybody wanted it to be good for Vic because she was so committed to it and it really mattered hugely to her so everybody was doing their very best. For me it was just a big treat to work with Anne Reid as the droopy Jean and me as the bossy Dolly, who was very proper.” 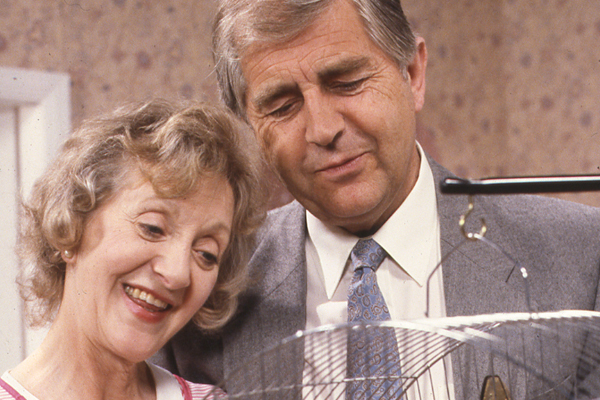 What did it mean to you be in something like that after Corrie?
“I hadn’t done a comedy series before so it was a big difference for me. I had decided to get out and test the water and do a mix of things so it lovely knowing I had something like dinnerladies but it was nerve-wracking because before then I had been living a cosy life working with people I knew well.”

Are you still in touch with Corrie friends?
“Not a lot, but I did a couple of programmes with Barbara Knox about Rita last year and that was lovely, we picked up where we left off. I also see Helen Worth a bit too and we think about each other fondly. I don’t watch The Street now, though. I left 20 years ago and then I watched it faithfully for about 12 years, but it is such a commitment. I occasionally drop in, but I don’t know who half the people are now! But it is nice to see old friends like Barbara or Helen or Malcolm Hebden or Bill Roache.”

Do people still come up to you about Mavis?
“Yes! It always amazes me that they recognise me now because I don’t look at all like Mavis, I look much more like Dolly with my hair back and I am 20 years older! But people always say, ‘I loved you in Coronation Street.’ I used to get impatient with Mavis though and think, ‘For goodness sake, woman!’ But she did get some spirit when she married Derek. One of them had to become decisive!”

Watch the trailer for Our Friend Victoria

Our Friend Victoria screens on Tuesday on BBC1 at 9pm

The Broadchurch creator analyses the suspects!