Hayden-Hoyle uncovers an international cover-up of the Stein wiretap...

The burned man and the mysterious contact who came to his aid, revealing herself as Monica Chatwin, rendezvous in a hotel room. When MI6 agents bug the room, Chatwin starts a fire and the duo escapes.

Sir Hugh tells Nessa he knows she’s collaborating with the terrorists to get Kasim back. She tells him the Israeli national MI6 spotted Monica meeting with is actually a Palestinian terrorist (the burned man) and then confesses the truth about Kasim’s parentage.

Nessa takes some small revenge, seeking out the barfly who raped and beat her and telling his wife what he did.

Ephra pulls Atika aside and asks her why she told Rachel about Kasim. She confesses that she couldn’t stand the pressure of keeping so many secrets and the lovers reconcile.

Sir Hugh meets with Nessa’s investigator, who has identified Monica Chatwin’s secret phone and suggests he investigate recent calls she made to Holland and Washington, DC.

In Israel, Nessa fields tough questions from journalists at the press conference announcing El-Amin’s selection, but she’s forced to suspend proceedings when El-Amin doesn’t show. Nessa tells her assistant, Frances, to make sure El-Amin attends the groundbreaking ceremony but his camp claims the contractor is suffering from food poisoning.

Frances spots a new, compromising clause in El-Amin’s deal granting him unlimited rights to retain the contract and asks Nessa why she would agree to it. Nessa asks Frances to trust her.

Meanwhile, Ephra and Atika sneak off to a cottage in the English countryside for a mid-day tryst.

El-Amin shows up to the groundbreaking ceremony, still feeling ill. Nessa makes her speech and El-Amin tells her she’ll be reunited with Kasim that night.

Nessa notices El-Amin’s camp fleeing as she prepares to start up the digger. She runs after them, and when a worker takes her place and starts the machine, a bomb obliterates everything in Nessa’s wake.

Rachel appears at the cottage and surprises Ephra and Atika. Atika tells Rachel to leave and pulls out a walkie-talkie. Before Ephra or his wife can figure out what’s going on, a sniper kills Ephra. Atika gives Rachel a shotgun and tells her to hide.

Ephra’s assassin, the burned man, appears. Atika tries to convince him to spare Rachel’s life, but he remains firm. Rachel, however, has quietly circled around the cottage, and takes the opportunity to shoot the burned man dead.

Atika contacts Monica Chatwin and tells her Ephra, the burned man, and Rachel are all dead. At that moment, Rachel’s water breaks.

An agent informs Sir Hugh and Dame Julia that Monica Chatwin just placed a call to a cellphone at Ephra Stein’s vacation home. MI6 dispatches agents to the location, where they find Atika attempting to deliver Rachel’s baby.

Meanwhile, MI6 also notices Monica placing a call to the Zionist group who claimed the teacher’s killing. Chatwin tells them to claim Ephra’s death. The Zionists post a message claiming not only Ephra but Nessa’s assassination and telling the world that Nessa was impregnated with a Palestinian child.

Troops search an address Monica called in Holland and find her Zionist contact recently slain. The Israelis deny involvement in any recent developments.

An agent tells Sir Hugh that they’ve identified the government employee Monica called in Washington, an advisor to the Secretary of State. Hugh hones in on footage of a White House press conference when the press secretary confirms that the Secretary of State plans to condemn Israel for failing to prevent the attacks with three familiar words: “She has agreed.”

Who are the Stein family?

The Stein Group, a former arms company, was created by the late Eli Stein and is currently run by his Anglo-Israeli daughter, Nessa Stein. 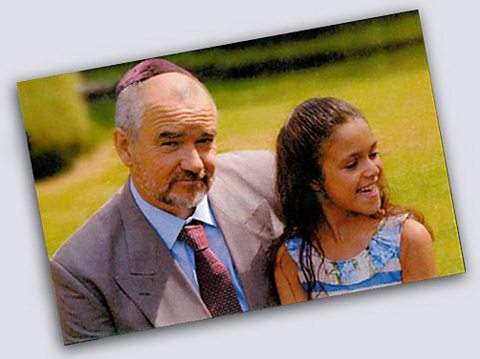 Nessa and her father before his death.

As children, Nessa and her brother Ephra witnessed the brutal assassination of Eli, a Zionist arms procurer, at the hands of the armed wing of Palestinian Liberation Organisation (PLO). His wife Judith had died several years earlier, whilst giving birth to Nessa and thus, the Stein siblings were orphaned by the attack.

Once of age, Ephra took his father's place at the head of the company and won critical acclaim for his philanthropic initiatives in Israel, providing charitable funding for educational institutes. In 2006 he was awarded the Head of States Certificate for Outstanding Contribution by the Israeli Education Sector. In the same year, Ephra was awarded the Israeli Education Prize for Charitable Funding at the Peaceful Business Excellence Awards. 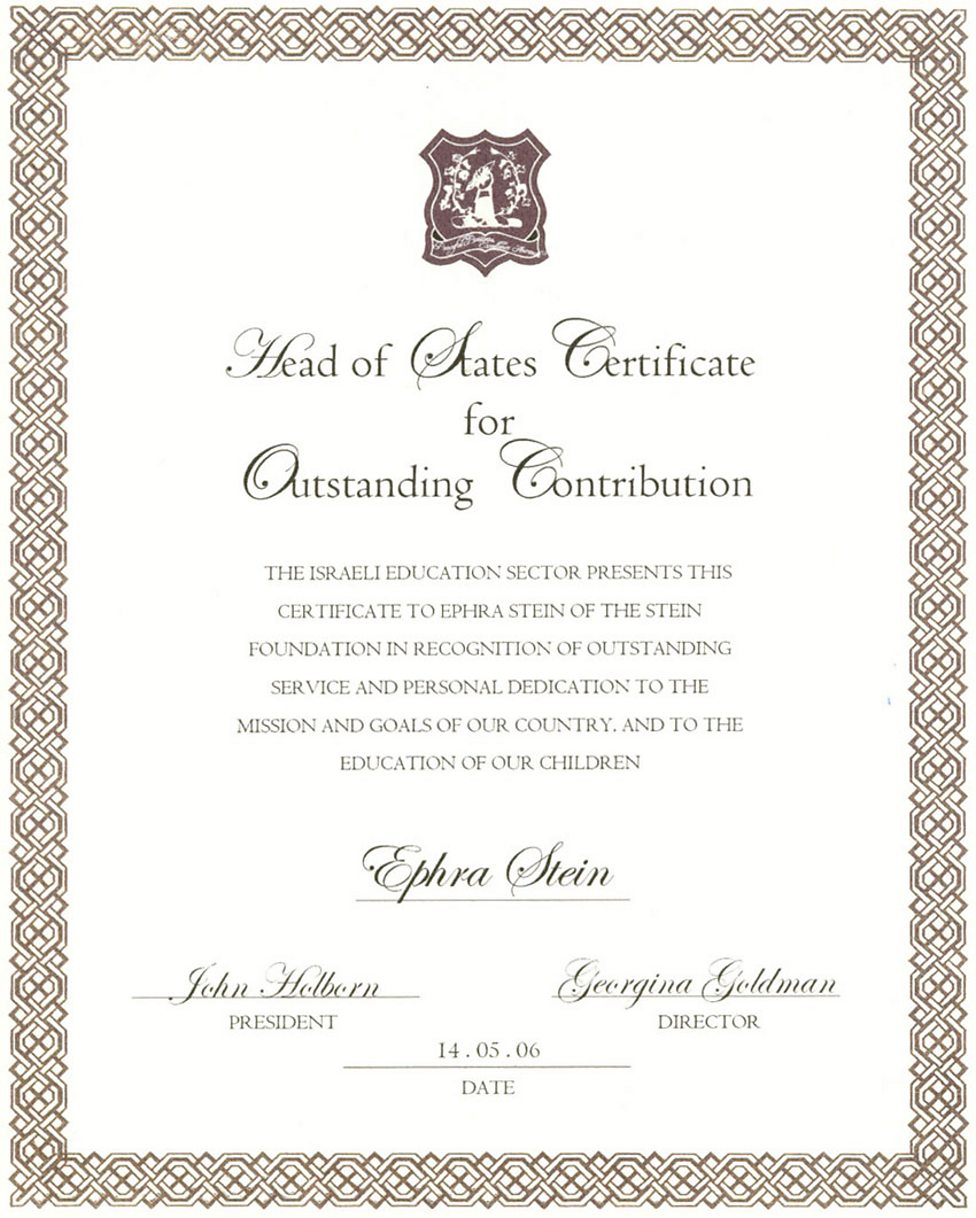 Despite his notable achievements, eight years ago Ephra stepped aside from his position at the head of the Stein Group and passed the mantle onto his sister. Nessa continued the group's philanthropic output, but she also had more radical ideas from the company's future - she inverted its purpose, providing high-speed data cabling across the Middle East in an effort to remove barriers, increase learning and knowledge, and peace in an area that has only ever known conflict.

Like her brother before her, Nessa's commitment to peace and education in the Middle East have seen her awarded with prizes for her sharp business brain and philanthropic effort. Just two years after her brother's triumph at the same event, Nessa was awarded the prize for Outstanding Female Leader in Global Trade and Business at the Peaceful Business Excellence Awards. She has also been honoured with the award for Advanced Communications Development in Times of Conflict by the Human Rights Commission for the laying of fibre optic cables throughout the West Bank, Gaza. 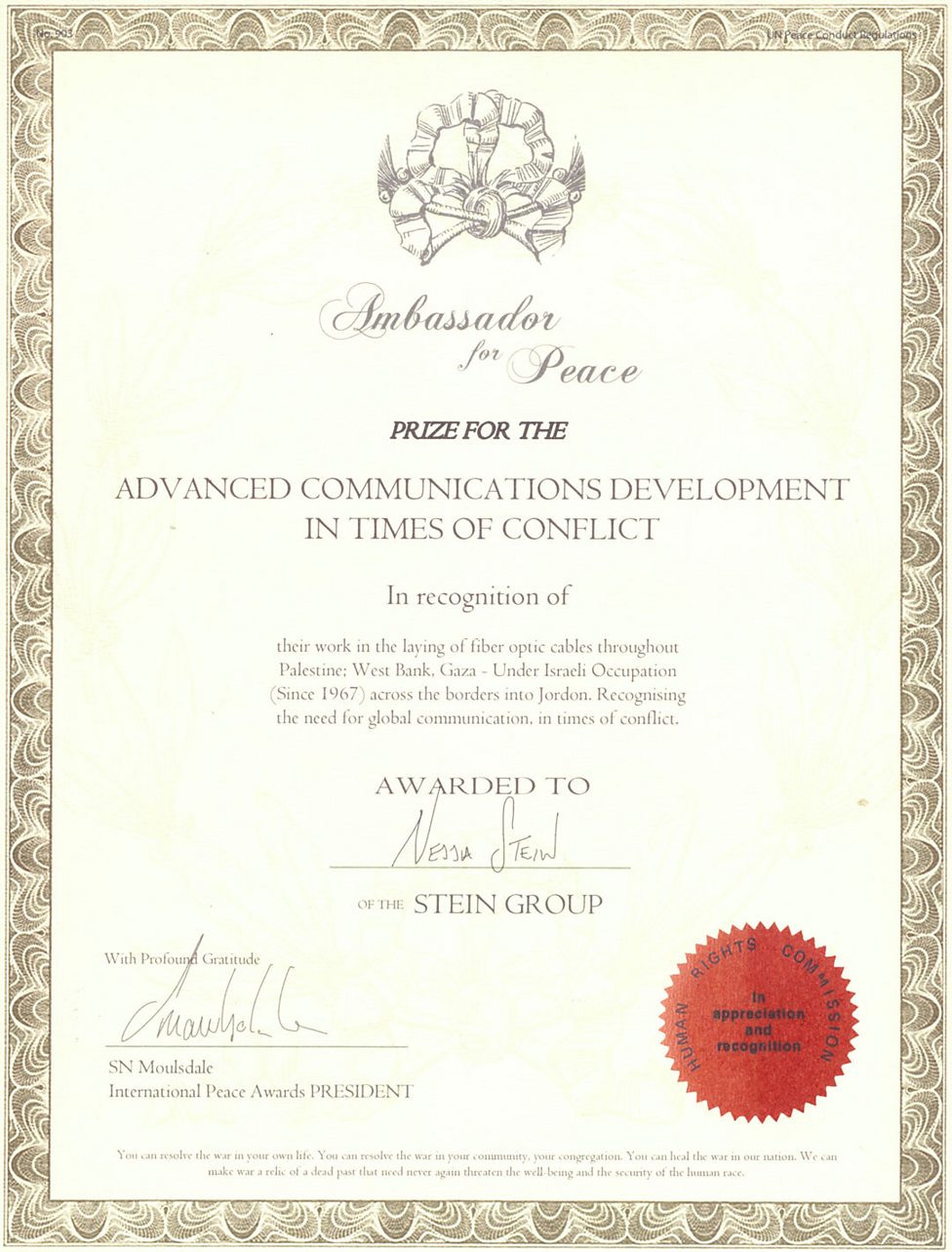 In 2014, due to her tireless promotion of projects for reconciliation between the Israelis and Palestinians, Nessa was made a life peer with a seat in the House of Lords.

She will henceforth bear the title of Baroness Nessa Stein. 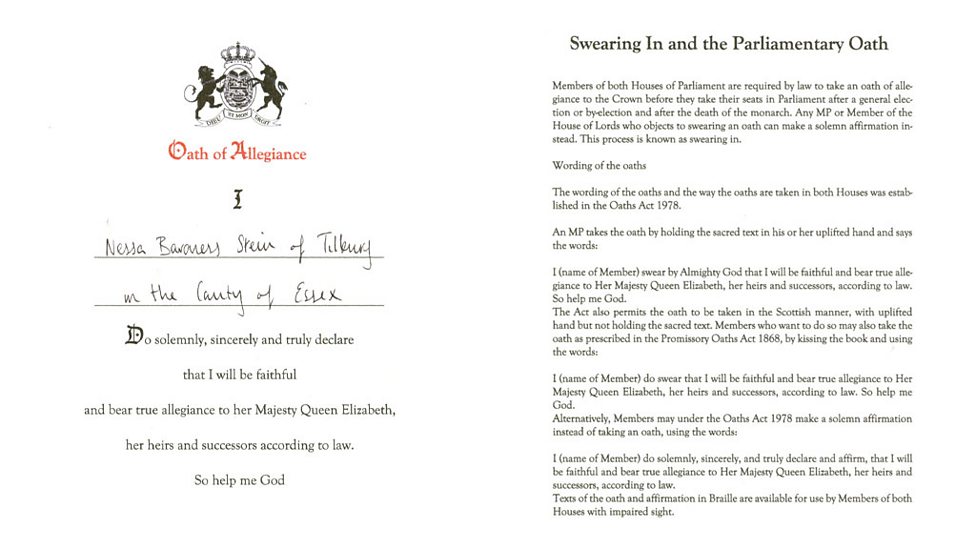