The Great Australian Bake Off 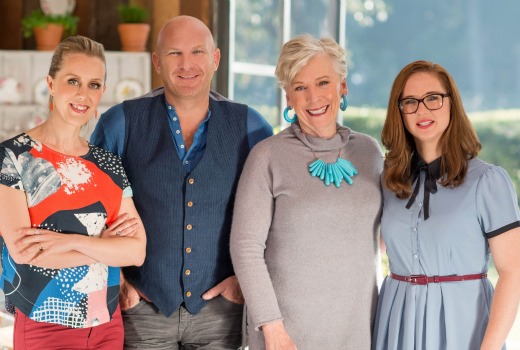 Cast your mind back to 2013 when Nine aired The Great Australian Bake-Off.

Filmed in a marquee at Werribee Mansion it was hosted by Anna Gare, Shane Jacobson with judges Dan Lepard and the very stern Kerry Vincent. But while colourfully-produced, the show was bounced around Nine’s schedule on Tuesday nights.

Two years later the show is back, now produced by FremantleMedia Australia with hosts comedians Claire Hooper and Mel Buttle and judges Maggie Beer and Matt Moran. Now filmed in an Aussie shed, the new lease of life is considerable improvement.

The opening credits will have you licking your lips. Sorry MasterChef, you can keep your BBQ challenges, we just want to get to the desserts.

Cakes, scones, pastries, pies, eclairs and cupcakes. Yum! You’ll put a kilo or 2 on the hips just from watching this thing.

Based on the immensely popular Great British Bake Off (which just drew the UK’s biggest TV ratings of the year), this show has a warm heart. With Maggie Beer on hand how could it not? It doesn’t “eliminate” contestants, it “farewells” them, complete with a Maggie embrace.

Hooper and Buttle keep things light with their humour (although it was hard to discern each in their narration).

This lot can whip up all manner of scrumptious dishes, immaculate in their technique, with precision and flair.

They will face-off in 30 challenges across the series, comprising three tests each week: the Signature Bake, the Technical Bake and the Showstopper.

In the first episode they create their “signature cake,” varying from cheesecakes to elaborate chocolate creations. But earthy Matt Moran expects more than just chocolate, he wants tempered chocolate.

I felt a little incomplete that no winner of the round was declared.

In the Technical Bake Maggie Beer gives them a recipe for a Constitution Cake complete with bush tucker, wild fruits, quandongs and wattle seed. This challenge is a blind tasting.

In the Showstopper the judges want a cake with a surprise inside layer. I feel for the contestant who already served up Pinata cake with surprise chocolates. Nevertheless, others get creative with profiteroles, Guinness, citrus, union jacks, and even a sponge shoe.

The series maintains a sense of lightness with pizzicato music and lots of laughter amongst its feelgood contestants. There’s never a sense of arched competition nor the token nasty judge.

But when cakes fail to rise or begin melting and sliding, there is just enough drama.

“It looked like a Tarantino film….” sighs one contestant.

Another sits cross-legged on the floor never taking his eyes off the oven and his precious cakes.

With Maggie Beer waiting to bear-hug him goodbye, who can blame him?