The CW’s The Flash is in the holiday spirit with tonight’s episode “Running to Stand Still” which serves as the show’s second mid-season finale. In classic The Flashfashion, we didn’t get a whole lot of plot advancement in this hour, but we did get a heaping holiday helping of character development and emotional exchanges. Somehow this episode was able to work in three villains (four if you also factor in Zoom), a budding romance and a romantic relationship that’s ready to take the next step, plus the reveal of a long-lost son and the arrival of a familiar comic book character who makes his first appearance on the show. And it all worked!

In order to keep things straight in this hour, it’s important to remember three things that were revealed on past episodes: Mark Mardon aka Weather Wizard was responsible for the death of Patty Spivot’s dad, Iris is aware of the existence of an estranged West family member though her father is not, and Mark Hamill stars as the insane toy-crazy supervillain The Trickster. Got it? Good! Then let’s jump into tonight’s insanity. 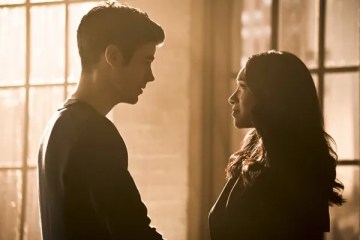 The cold open from “Running to Stand Still” tied directly into the episode’s stinger; both concerned a shady meeting between Harry Wells and the demon speedster Zoom. At the outset, it looks like Wells is running away from Zoom and even trying to defend himself, but it’s soon revealed that Zoom merely wants to know if Wells is ready to help him yet, in exchange for his daughter’s well-being. While we don’t find out for sure what’s going on until the final moments, what is certain is this: Zoom makes the creepiest holiday well-wisher ever.

Since Barry Allen’s personal life and The Flash’s superheroics are fairly well separated in this episode, with the exception of one or two scenes, we’ll dig into the modest side of the speedster’s dual life first. It’s made apparent very quickly that Christmas has come to Central City since everyone’s decked out in ugly sweaters and the typical accoutrements adorn the entire city. It’s got a nice aesthetic to it, a visual style that really makes you anxious for the big holiday party at the end of the episode, once they’ve solved some meta-human problems.

After Iris learns that her father’s watch was a gift from his own father (one that was meant to remind him that he was always late), she soon happens upon Barry and Patty making out on the job. Last season, Iris and Barry might have been really awkward about this, but this time around they’re more concerned with breaking the news to Joe about his estranged son. This incredibly touchy subject draws out some of the deepest father/son feels we’ve seen in the series so far, especially since Barry and Joe have been on more equal footing lately as the superhero takes on more and more adult responsibilities. This leveling of the playing field is best exemplified when Joe tells Barry how guilty he’s feeling about taking the easy way out – regarding Francine and his son – for the past 20 years. It’s cemented when Joe gives Barry his father’s watch, clearing away any doubt that Barry will always be Joe’s son no matter who else steps into the picture. 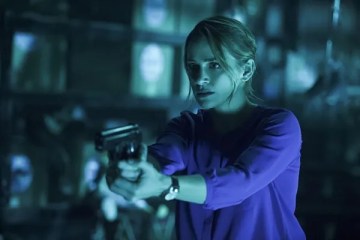 Doubling down on the daddy issues this episode, we soon learn that the Weather Wizard is back in town, an event which dredges up all sorts of bad feelings for Patty. Joe fills Barry in on her past with the meta-human, but Patty keeps her distance for most of the episode. She actually reveals more of her pain to The Flash than Barry himself, telling the masked hero that she was supposed to be making a trip to the bank on the day her father was killed by Mardon. That guilt stayed with her all these years, but when Patty has Mardon at gunpoint by episode’s end, she finally gets her chance to get closure. More on her decision in a second.

Once the meta-human threat is taken care of (and Barry decides to forgive Dr. Wells despite all the pain he’s caused), the team does get to enjoy a Christmas party. Jay Garrick and Caitlin finally give into their desire and kiss beneath the mistletoe, Patty arrives with a gift for Barry and promises to let him on what’s been bothering her, and Harry stays behind at the lab since he won’t celebrate Christmas without his daughter. (Cisco seems totally fine after last week’s events. He must have a short memory.) And then, the entire West family is shocked as Wally (Keiynan Lonsdale) shows up at the front door! They literally do nothing with Wally other than introduce him in the last few seconds of the main storyline, but like Joe said, there will be time for that later.

As for the action-oriented portion of tonight’s events, it was a pretty zany hour. While Jay and Caitlin are still puzzling out how they’re going to close the breaches across the city, their scientific expertise (along with Cisco) is soon redirected towards making a device that will negate the newly arrived Weather Wizard’s power. Except this time, it’s not just one supervillain but three they’ll be facing since Mardon busts Captain Cold and The Trickster out of Iron Heights. 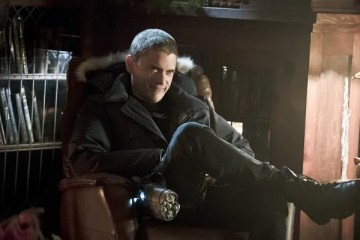 Captain Cold is one of the last pieces of the puzzle for The CW’s spin-off series Legends of Tomorrow, but I’m happy they didn’t spin a whole episode around his heroic transition. Instead, they bust him out of prison, give him a chance to help the heroes by way of sharing intel, and then let him disappear into the night. It was a perfect way to connect the dots but not overdo it. The Trickster, however, was delightfully deranged in this episode thanks to the fantastic scene-chewing by Hamill. There’s really no reason for these particular heroes to be working together except for the generic “Kill The Flash” plan, so the only downside is that they never quite work together to become more than a sum of their parts.

That’s not to say they’re useless as villains. The Trickster is at his best when he’s using traps and gags to lure the hero into danger or put him into a predicament that will force him to sacrifice himself so that others might live. The first (and hilarious) instance of this is when Trickster sets a trap at a defunct toy factory in which dreidels made out of C-4 spin their way around The Flash and Patty Spivot. The hero gets them both out of harm’s way, of course, but when The Trickster plays mall Santa in order to place 100 bombs disguised as Christmas presents in the hands of children all over the city, that puts The Flash in a tight spot. Add to this the fact that Weather Wizard is dead set on beating The Flash to death in a public display (otherwise he’ll essentially murder 100 families), and this predicament becomes one of the more diabolical schemes in recent memory. The only thing more ridiculous is how the S.T.A.R. Labs team saves the day. 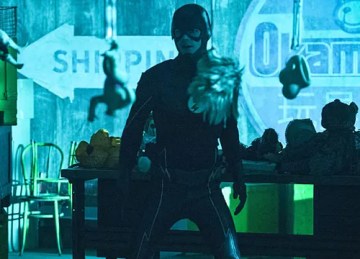 While Barry’s taking a beating, the others plan to use a drone to fly one of the bombs through an open breach, then rely on hand-waving and a loose description of the properties of magnetism to drag the other 99 bombs into the portal with it. While I was half hoping that these bombs would end up in Gorilla City and provide yet another reason for Grodd to hate humans, they simply seemed to blow up in mid-air. With the threat to Central City’s families neutralized, The Flash ties up The Trickster (with Christmas lights, no less) and diffuses Weather Wizard. Things would be all wrapped up with a bow except for the arrival of Patty Spivot with a gun aimed at Mardon’s head, seeking her revenge. Luckily, The Flash is able to appeal to her sense of justice and manages to talk her down; Patty settles for taking Mardon into custody.

Despite all of this craziness going on, this episode of The Flash was surprisingly focused and cohesive. There was even time to work in a little tease between Wells and Zoom. Keep the cold open in mind, as well as the forgiveness of the original Harrison Wells by Barry, since both of those things will come into play here at the episode’s end. We see Harry surreptitiously meeting with Zoom again. The speedster threatens to kill the S.T.A.R. Labs members (or Harry’s daughter) if he doesn’t provide an answer to Zoom’s question. What question, you ask? Well, whether or not Harry is going to help Zoom “fatten up” Barry’s Speed Force before the villain steals all of his power away.

If you didn’t think Zoom was diabolical before, this episode allows him to dangle Harry’s daughter in front of his eyes before snatching her away again, forcing Harry’s hand. While you can’t really blame Harrison Wells for his behavior in either universe, at least this Harry actually is Harrison Wells and not a time-traveling speedster in disguise. This betrayal of Barry’s trust is all the more painful, however, since Barry just offered up a heartfelt speech forgiving Wells for all his wrongs. It’s looking like the New Year will give Harry plenty of opportunity to feed Barry to Zoom, or do the right thing and help the speedster take down the villain once and for all. 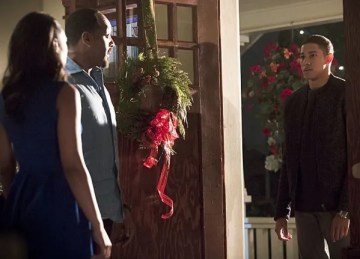 The Trickster: “It’s beginning to look a lot like Christmas.” This is the Mark Hamill you’ve been waiting for.

Apparently all Earths have The Godfather, but there’s only one Trickster. Good to know.

Joe: “Who taught him how to be a man, Barry? ‘Him’…I can’t even say his name.” If anyone out there has daddy issues, I feel for you right now.

T.A.R.U. = Tactical Assistance Response Unit, if you were wondering.

Trickster: “We can’t let Christmas have all the fun! Dreidel, dreidel, dreidel, I made you out of C-4! Put that in your pipe and smoke it!” Hamill unhinged is my favorite Hamill.

Harry Wells: “Your toys. Give them to me.”

Cisco: “How do you like them magnets, bitch?” Jesse Pinkman: “Yeah, bitch! Magnets!” 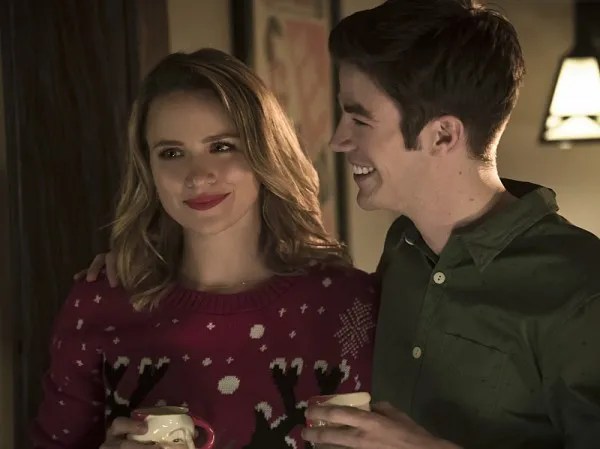