[This article contains mild SPOILERS for The Flash Season 3, Episode 22.]

While Warner Bros. is weeks away from debuting Wonder Woman in theaters, The Flash just made reference to one of her villains. Throughout season 3, The Flash has been dealing with the fallout of Flashpoint and Team Flash’s battle with Savitar. This has put Barry Allen (Grant Gustin) in a race against time and his future self in an effort to prevent Iris West from dying, and his latest attempt brought him into an alliance with former nemesis Captain Cold (Wentworth Miller).

Fans of the series may have been glad to see a familiar face return, but the episode also marked the return of King Shark, as Snart and Allen broke into Argus. During that sequence fans were treated to an Easter egg that makes it clear Cheetah (in some form or another) is in the Arrowverse.

Barry and Snart are in Argus to steal a piece of equipment they believe is capable of defeating Savitar. As they make their way to a vault, they pass a series of rooms, one of which is labeled as a holding cell for Cheetah. In case viewers missed it already, Natalie Abrams of EW was able to share a screen grab containing the Easter egg. 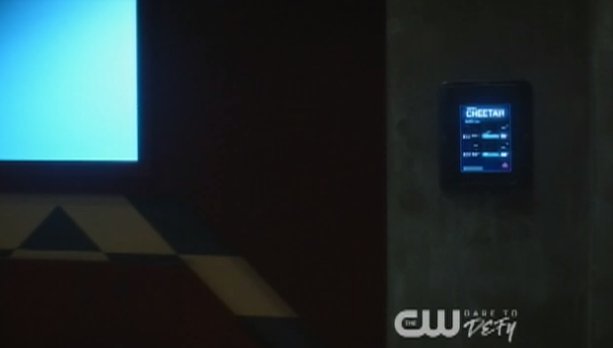 Cheetah is the codename for Barbara Ann Minerva, an archeologist who gains the abilities of her feline name after being involved with a sacred ritual. She has continued to cross paths with Wonder Woman in the years since her debut, but the two have also been allies at times. There is no word on her big screen debut set for Wonder Woman (or any DCEU film for that matter), but the timing could be perfect for The Flash and the rest of the Arrowverse to build off the release of Wonder Woman and introduce some of her world as well.

Since this is the first sign of Cheetah in the Arrowverse, it is unclear if this is simply just an Easter egg for comic fans, or if this is a tease of Cheetah’s eventual debut on the small screen. If the latter, it could open up the door for other Wonder Woman characters to be brought into this universe. Then again, this could be another case of a tease that will go unanswered as these shows continue.

The Flash season 3 concludes next Tuesday with ‘Finish Line’ @8pm on The CW.

Next on Coronation Street: Liz causes a ...