U.S.A. SHOWS
by The King Himself

“No Such Thing as Justice”

As the execution date looms, Christine and the Innocence Initiative staff scrambles to prove a flaw in the case, while Adam plays every card he has in an effort to block them...[button color="red" size="small" link="http://www.wetv.com/shows/the-divide" target="blank" ]Official Site[/button]

As Christine reads Terry’s letter, he’s in the prison laundry room and the lights go out. Then a bottle comes flying through the window and hits Christine at the Initiative. “She never screamed out my name that day the way they said she did at the trial,” Terry’s voice reads in his letter. “I wish she did. We made love that day.” He insists that he would never had hurt Emily.

More bottles go flying through the windows of the Innocence Initiative and Christine ducks for cover. Meanwhile, Terry gets stabbed in the abdomen in the laundry room, where the lights have been shut off. 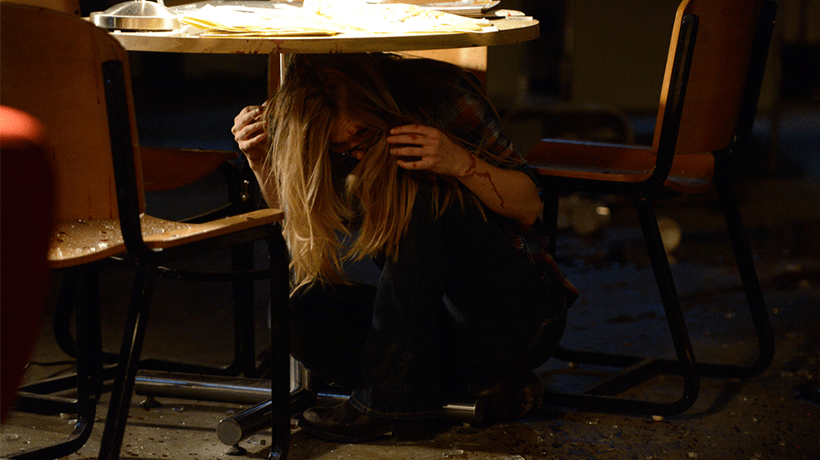 Christine meets with the police and her boyfriend Danny, who’s a cop, comes in after hearing the call about the attack over the radio. Danny asks Christine’s boss Clark Rylance if he knows who attacked the office. Christine reveals that since the press conference with Jenny Butler, they’ve been getting phone threats. Then Clark says he just received a call about Terry Kucik getting stabbed in prison.

Billie Page sits in the kitchen and her husband Adam comes in. She asks why he put Jenny Butler through the press conference if he really thought things were going to blow over. She tells him that Jenny is so nervous the closer it comes to the execution date that she suggested she stay home from work for now. “We’re not becoming those people, are we?” Billie asks. “What people?” he responds. “You know, just all about the moves,” she says.

Clark holds a meeting at the Innocence Initiative less than two days before Jared Bankowski’s execution. They need to follow up with the board of pardons for a reconsideration based on the new evidence of Bankowski’s police booking photos. Christine is leading drug litigation efforts and says since Pentobarbital is no longer exported by European pharmaceutical companies, they’re using local pharmaceutical companies for the lethal compound. Clark says that if they can prove that the drugs haven’t been sufficiently tested or are even expired, they can get a motion for a stay.

Bankowski meets with his mom in prison. He tells her that he’s ordered his final meal — hot dogs, the same ones she used to buy. They talk about his DNA being retested. She asks if there’s a chance that it will change anything and he says not for him “So, you’re still blaming me for all this?,” she lashes out at him. “You broke my heart for a long time.” Bankowski responds: “Well, it took that long to find it.” She tells him he did this to himself and she doesn’t understand why she deserves this. “You think when you’re lookin’ at the end you’re gonna get the reason why everything was the way it was, but you don’t. Don’t waste any time thinking about it. We are who we are, ma.” He says he gave her better life in prison than he ever did when he was out. “Was it worth it?” he asks. She gives him a cold stare and then gets up and leaves. He calls after her but she walks away. 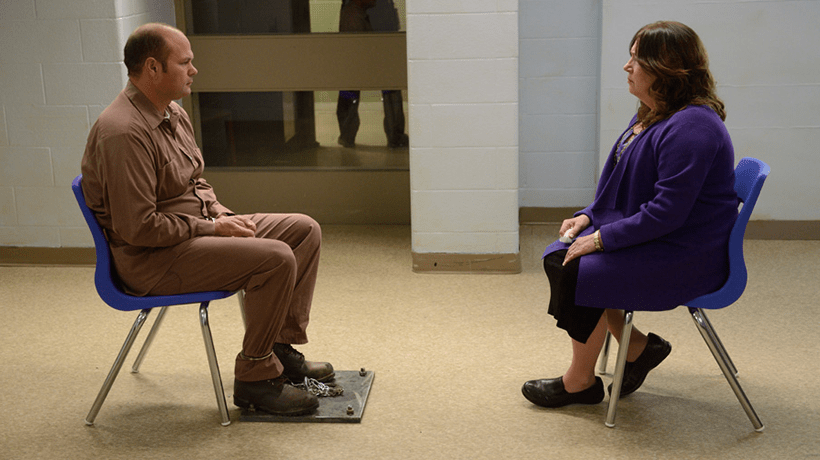 Jenny Butler comes home to her apartment. While opening up her front door, she flashes back to her family being murdered and remembers seeing Jared Bankowski in the house. Meanwhile, Bankowski sits in his cell. It’s just nine hours to go before the execution. 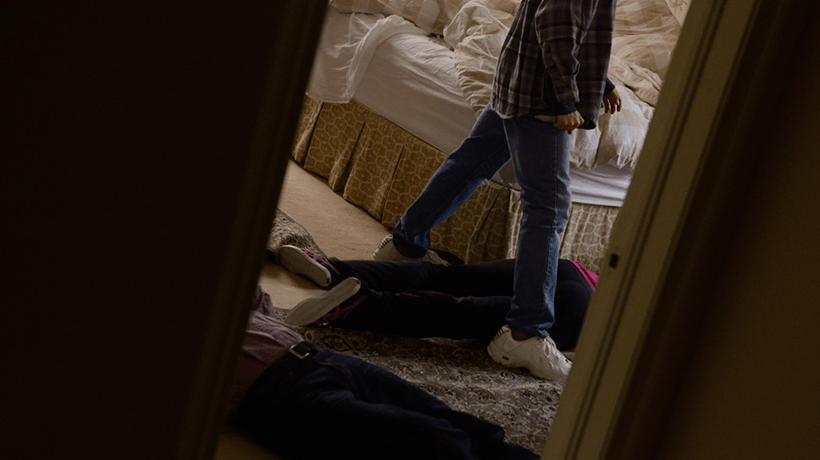 Adam goes to Jenny Butler’s apartment to take her to the execution. She groggily answers the door. She had taken something to sleep. At the prison, Christine finds out the DNA results aren’t complete yet. Clark tells Bankowski that the governor has refused the stay. Christine cries and asks Bankowski if there’s anything else they can do for him. “There’s one other thing I don’t want to carry with me to the other side,” he says. “Terry Kucik is innocent. He was never there.”

As they walk down the prison hallway, Christine says she believes him. Clark thinks he was guilty because he said he was there — that’s why he knew Terry wasn’t. She says all these years Terry has been telling the truth. “Something’s not right,” he says.

Adam drives Jenny to the prison and says he can turn around if she wants. “I need to see him die,” she insists. Jenny Butler and Adam Page are seated in the execution viewing room, waiting as Jared Bankowski is prepped for his lethal injection. She flashes back to her sister, bloody and crawling across the floor of their home. As Bankowski is injected with the lethal solution, he begins to shake and cry. His mother watches the TV at home.

The next day, Christine visits her father in prison. Her father asks about Danny and if she trusts him. She apologizes for not visiting him the day of Bankowski’s execution. He talks about Maxine visiting him and that they got into a fight — he told her not to visit anymore. “She’s a beautiful woman with a lot of good years left. I can’t look at her anymore.” He told her not to come anymore. Her father asks if Danny has a name. “No, he’s nameless. He’s the cop with no name,” Christine says jokingly. They lovingly make fun of each other.

Billie’s in the kitchen and finds evidence of marijuana. She confronts her son Trey, who says it’s not his but admits that he’s tried it. He asks his mom if she has and she lashes out. She warns him if it happens again, she’ll tell his father. Jenny comes to the house to go to work with Billie. She asks if it’s okay to go back to work because she wants to go back.

At Maxine’s bar, Clark brings the DNA results for Jared Bankowski to Christine. They came back negative — it wasn’t his DNA at the crime scene of the Butler murders. He was innocent. 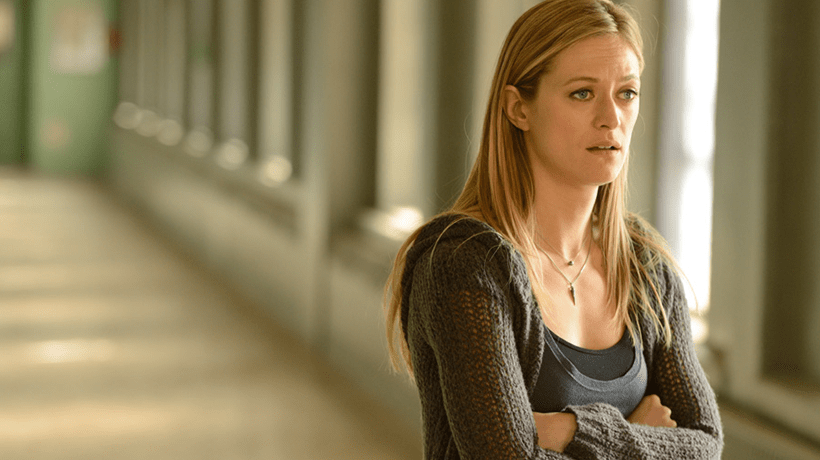 Clark goes to Adam’s office and tells him the news about Bankowski’s DNA. Adam says it doesn’t mean he wasn’t guilty. “He have been guilty of something but he didn’t kill that family,” says Clark. “The wrong guy was executed.” Adam insists there was still a witness and he could’ve held the knife that killed Frances Butler. “You better hope you’re right because we’re gonna be looking in every corner of this case and if you’re wrong, it’ll be the first time in American history that a state is proven to have executed an innocent man,” Clark says, informing him that they’re reviewing the Terry Kucik conviction and that they’ll be asking for a new trial.

Isaiah Page comes by Adam’s office and Adam tells him about the DNA results. Isaiah tells him he has to get his own independent DNA results. “Somebody’s trying to bring me down,” says Adam. “And it’s somebody with all the pull and all the money. Somebody so deep in the background his hands stay clean.” They discuss a man named Zea (sp?), who Adam’s been investigating. His pockets are full of “dark money” that he’s pushing through phony nonprofits all across the state among other things.

Adam says he’s ordered all of the trial evidence out of storage from the courthouse. He wonders how this all happened since the forensics seemed perfect at the time of the trial. They remember who the forensics person was at the time but he’s now retired. “Once I clean up this mess, you’re gonna help me get Zea,” Adam tells his father.

Christine and Clark meet with Adam. They tell him based on the Bankowski booking photos, the statement from him that Terry Kucik wasn’t at the scene of the crime and the DNA results, they want Kucik released pending a new trial. Clark tells him to forget that he’s the district attorney and the future governor of Pennsylvania for just a minute and “be my law school buddy again.” He tells Adam to look at the facts: Terry Kucik’s DNA was at the scene of the crime, but he wasn’t there. They don’t have Jared Bankowski’s DNA at the scene of the crime, but Jared Bankowski was there. “You have to ask yourself, Adam — whose DNA is under Frances Butler’s fingernails? Who was in that house with Jared Bankowski?” Clark says. He tells Adam he needs to consider the possibility that the man who killed the Butlers was never brought to trial.

In the prison waiting room, Terry Kucik asks Christine, “So, are you ready to listen?” Christine responds: “Let’s start at the beginning.”

Recap is courtesy of Serena Kappes/WETV.com