U.S.A. SHOWS
by The King Himself

It’s closing time at Maxine’s bar and law student Christine Rosa reads a Nietzsche book. She leaves the bar to go back to the Innocence Initiative, an organization dedicated to freeing the wrongfully convicted. At the same time, Philadelphia district attorney Adam Page gives a speech at a swanky gala about his wife Billie, who’s being named Woman of the Year.

As Adam gushes about her, Christine is at the Innocence Initiative watching a news report about the upcoming execution of Jared Bankowski — the first man to be executed in Pennsylvania in the 21st century — in less than three weeks. He was sentenced to death for brutally murdering an African-American family, the Butlers, in their suburban home 12 years earlier. Terry Kucik, who was 17 at the time, was also convicted as an accessory to that crime.

During the TV news report Christine is watching, Adam Page — whose first big case as an assistant district attorney was the Bankowski trial — is interviewed by a reporter who mentions that the trial happened during the 2004 Democratic National Convention and that Adam Page quoted then-Sen. Barack Obama’s speech in his summation: “There’s not a white America, or a black America or a Latino America or an Asian America — there’s the United States of America.” As Page tells the reporter: “This was never a trial about race for me — this was about justice.”

In the courtroom, Jared Bankowski sits as his appeal for clemency is being presented to the court. Adam Page speaks to the court and acknowledges Jenny Butler, who’s sitting in the courtroom. She was 8 years old when her family was murdered and was the only eyewitness to the crime. The court says they will make the decision about Bankowski’s appeal for clemency and will submit its recommendation to the governor — who has already signed an execution warrant from 18 days from the day.

At the Innocence Initiative, Clark Rylance talks to the law students working there about the letters Terry Kucik has been sending through the years about his innocence. He was convicted for accessory to rape and murder in the Butler case, but the Initiative didn’t take his case because his conviction was based on semen DNA evidence found inside 16-year-old murder victim Emily Butler. The jury opted for life without parole because he was 17 at the time and had no record.

Christine drives over to the house of a retired police photographer, who hands her a package and tells her that no one can know she got photos from him. She opens them up and they’re Jared Bankowski’s booking photos. Later, she shows up to the Innocence Initiative to talk to Clark. She says there’s never been a mention of police photos of Bankowski, which seemed strange because the DNA case against him was all about Frances Butler’s fingernails. His blood and skin were found underneath them, which means she scratched him — but there’s “not a mark on him” as she reveals Bankowski’s police photos. “Why weren’t they on the D.A.’s evidence list?” she asks, telling Clark that she can’t reveal how she got the photos but that they need to retest Bankowski’s DNA. 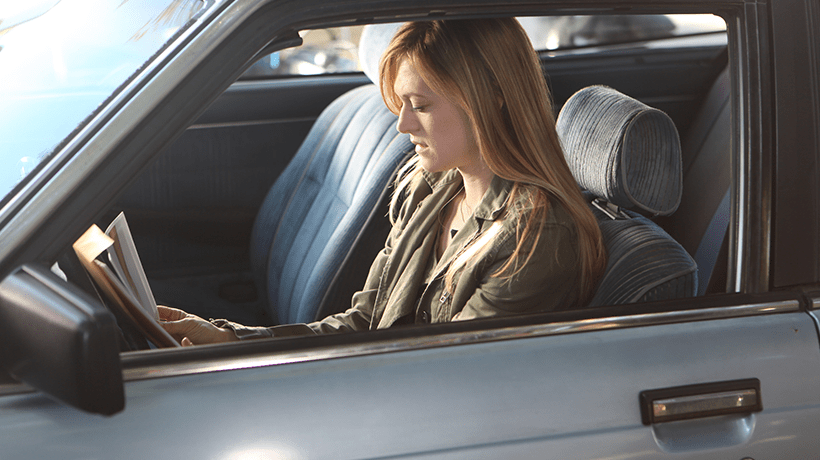 Clark and the defense attorney visit Bankowski in prison to tell him that he might be able to get his DNA retested. He says early on he was stupid enough to think there was a chance that he’d be exonerated but he doesn’t want his DNA to be retested. “They’re not letting me out of here until I’m dead, one way or another,” he says.

At the Page home, Adam speaks to his wife Billie about the timing of the Bankowski booking photos surfacing right before the execution. She asks him why he’s so upset. “I’m so upset because it ain’t about the case, baby– somebody’s going after me.” Billie says Clark — who they went to law school with — isn’t going after him and Adam really shouldn’t be surprised since this was his first big case. “If you want to take down a hero, you take down what made him a hero. It’s a smart move,” she says.

Christine visits Terry Kucik in prison. She tells him she’s read all of his letters and shows him the police photos of Bankowski, talking about the fact that he had no scratches. He’s confused, not understanding what this has to do with him. When Christine reiterates that she can’t help him because his DNA was found in Emily Butler, he slams his hand down on the table. “We had sex that day. I didn’t need to rape her because we were together,” he insists. “The only thing that I know about what happened in that house was my girlfriend was murdered and I’m in here for life.”

In court, the judge denies the motion to retest Jared Bankowski’s DNA and that the execution warrant will stand. Leaving court, Christine talks to the defense attorney and Clark and suggests that they still get Bankowski’s DNA tested by an independent lab.

Christine asks her boyfriend Danny, who’s a cop, to help get her on the list to see Bankowski in prison. With Danny’s help, Christine goes to prison to see Bankowski. But when she gets in to see Bankowski, he isn’t interested in talking to her — he tells her to flash her breasts. She tells him her father was on death row and was executed. Then she shows him her bra but quickly delves into the questionable facts around his arrest. “Something about this isn’t what it looks like,” Christine tells Bankowski. 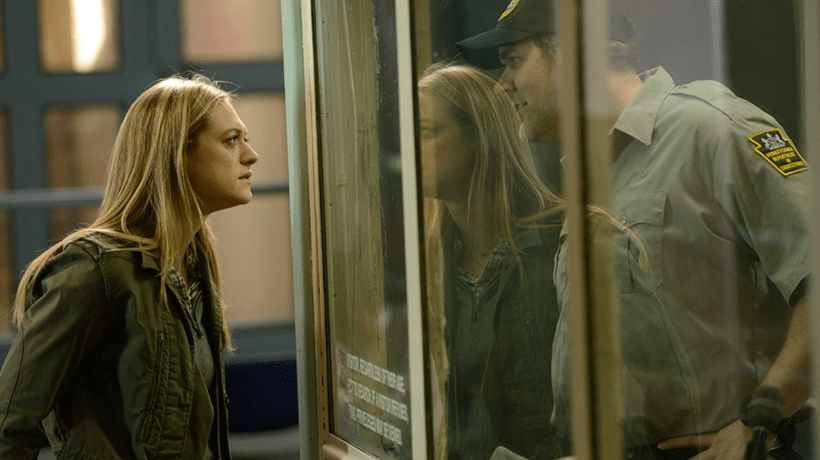 Christine tries to convince him to get his DNA retested. “I don’t like it when the law gets manipulated by people who think they matter more than other people — like my father, like you. I hate their arrogance, I hate they feel safe, I hate they feel entitled to feel safe. I want to make them sweat even if they win. Don’t you?” Bankowski asks her to guarantee him one thing: to make sure his blood is tested no matter what happens. “Did they really kill your daddy?” he asks. Christine leaves prison and starts sobbing in the parking lot.

At the Innocence Initiative, Christine tells Clark that she got in to see Bankowski in jail. He freaks out. Despite his anger, he calls Adam and tells him that Bankowski has agreed to retest his DNA. He also asks him for access to original crime scene DNA, which Adam refuses to do.

In prison, Clark swabs Bankowski’s his mouth for the DNA test but tells him that the test results might not be ready before the execution. “I don’t care when they’re done — you just make sure those tests happen and everybody knows,” says Bankowski.

Adam tells his father Isaiah, who’s the Philadelphia police commissioner, about the DNA retesting — and how if Clark goes public with the booking photos of Bankowski, the press will look directly into the police department’s involvement. Adam is worried it was “his mistake” and that he knew at the time there was reasonable doubt
where the DNA came from so he buried the photos. “The cost of being a great leader is knowing you’re not a great man and living with your mistakes every day,” Isaiah tells him. “We all have them — I know I do. Don’t doubt yourself now.”

Adam speaks to Jenny Butler about what’s happening with Bankowski’s DNA being retested. “They’re not gonna execute a white guy — not for killing black people,” she says. Adam tells her that 11 years ago he made a promise to see this through and that he’ll keep his promise. Asks her to speak about now. At a press conference, she speaks vehemently. “If my family was white and the killers were black, would we still be having to plead for justice? Please let my family rest in peace. Please let me have some peace.”

At a Civil Rights Coalition of Philadelphia event about the Bankowski case, Adam addresses an angry crowd. “We are not here to divide,” he says. “The Butlers were African-American but if they were white, Latino, Native American — we should still be here because an injustice against one people is an injustice against every people.” He insists he won’t back down from the fight and that justice will not be denied as long as he’s the district attorney of Philadelphia. 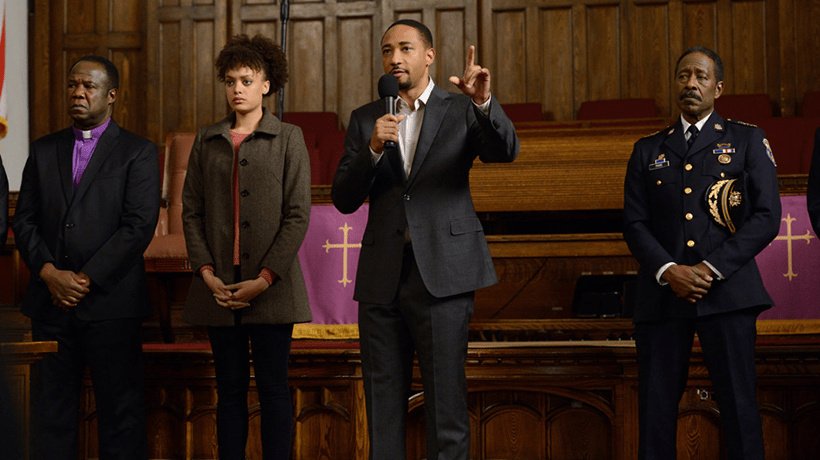 Christine sees Jenny smoking outside the church and tells her she’s sorry she’s going through all this. She reveals about her father being convicted and that she lost him — and that he was innocent. She knows because she was with him at the time and nobody believed her because she was a kid. Jenny says for years she wondered what made certain people want to kill but then she realized it could be anybody at all. “I completely understand what it feels like to want to kill someone and feel nothing about it except satisfaction.” 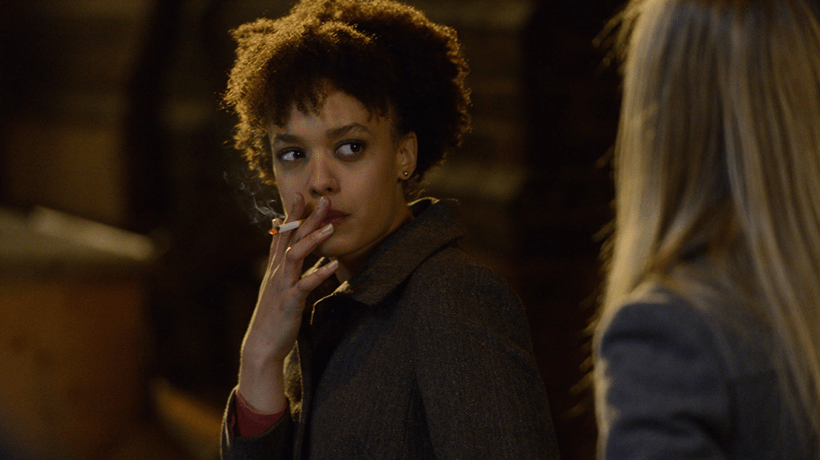 Christine goes to the prison but the person she’s visiting isn’t Bankowski — it’s her father. They make small talk and start to talk about Nietzsche — how he read in order for a man to become a hero, first he has to become a snake so he can know his enemy. She has tears in her eyes.

Recap is courtesy of Serena Kappes/WETV.com

He’s the Philadelphia District Attorney. She’s a high-powered lawyer. But for Adam and Billie Page, their grip on the city is starting to unwind because of one high-profile case from the past.