Marvel Comics artist Joe Quesada shares new artwork for The Defenders Netflix series. Now that Iron Fist is out, Marvel and Netflix are all ready to bring together The Defenders to face a threat bigger than the individual heroes. So far, we’ve only had hints as to what we should expect. We know there will be a corporate element to the battle, teased in a recent video for The Defenders. It’s also been alluded to in a batch of headlines from the Daily Bulletin on the show’s viral website. Of course, with all the ninjas and mystical threats running around, there’s bound to be more to it than meets the eye.

It’s been a month since The Defenders wrapped, so tidbits of news and various looks at the show have slowly been emerging. Last week, we got our first look at Daredevil in costume and on set, appearing to be checking into some sort of office or hotel. We’ve also seen a set video showing a number of the Defenders breaking into what could be the very same building. Both locations are likely under the control of Sigourney Weaver’s villain Alexandra. While we don’t know much about her or whether she’s connected to the comics, she likely won’t be the only one opposing our heroes.

Marvel CCO and artist Joe Quesada took to Twitter to share some promo art he made for the show as a gift for the cast and crew. You can check it out below to see the assembled team and their possible foes. 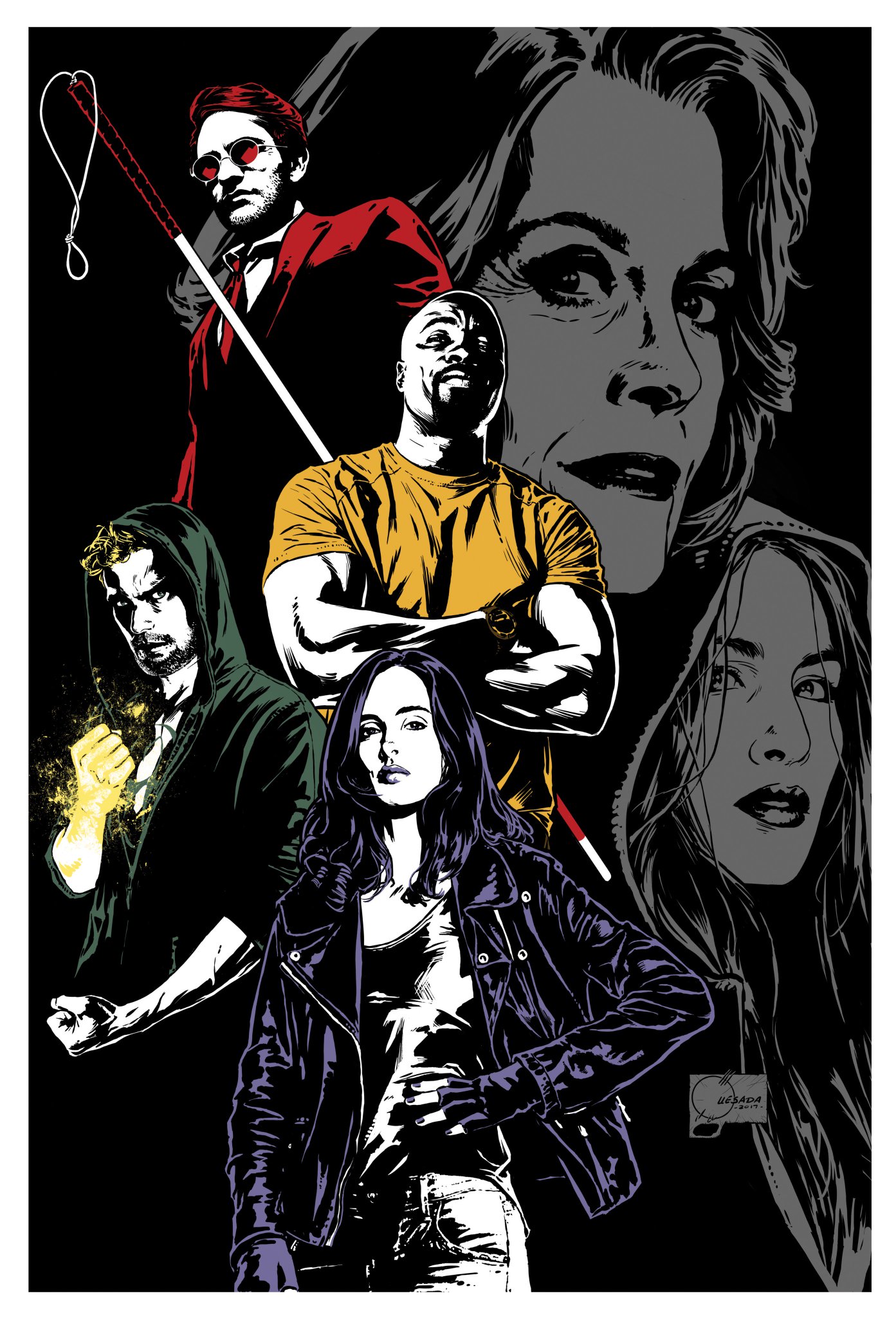 Here's a quick piece I did (sans logo and text) as a cast and crew gift for the Defenders team. This show is going to blow you away!

Along with Matt, Luke, Jessica, and Danny, we can see Weaver looming large above them all. She’s not alone, however. Also in white and under Alexandra is Elektra. We’ve known Elodie Yung would be returning to the series, but the last we saw of her character she was being brought back from the dead as a tool for the Hand. Given the way Iron Fist ended and how the Hand and Madame Gao have a connection to Danny, Matt, Elektra, and Claire, we expect they’re likely involved with Weaver’s character. Like Wilson Fisk in the first season of Daredevil, Alexandra will probably be teaming up with Gao and some other mysterious villains to continue the real estate plot that’s been woven throughout Marvel’s Netflix shows.

As exciting as the new art is, however, it’s not the first time we’ve seen it. Last month, a caterer for the film shared a photo of a cake celebrating the end of shooting. The image featured a shot of Quesada’s art (likely gifted to her), but was later removed. Now that everything is coming out in the open, hopefully we’ll be seeing a proper trailer for the upcoming show. With only a few short months until it premieres, Marvel will likely be keen to start promoting it very soon.

The Defenders arrives on August 18th, with The Punisher coming later this year. Daredevil seasons 1 and 2, Jessica Jones season 1, Luke Cage season 1, and Iron Fist season 1 are now available on Netflix. Premiere dates for the next seasons of Jessica Jones, Daredevil, and Luke Cage have not yet been revealed.