The Boy in The Dress 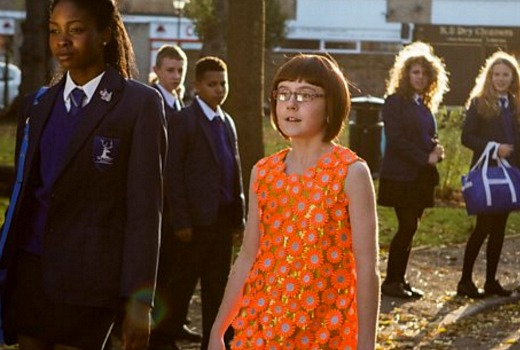 Twelve year old Dennis is like most British schoolboys except for one thing.

The Boy in the Dress is a one hour drama based on the children’s book by Little Britain‘s David Walliams.

12 year old Dennis (Billy Kennedy) is raised in a single family after his mother left his father. As such, embittered Dad (Steve Speirs) has banned all photos of his ex-wife, save for the one Dennis has secretly salvaged from a bbq pyre.

“I suppose I wanted to escape into some magical world. But I found it in the most unexpected place.”

When Dennis spies a copy of Vogue magazine at his local newsagency, the Kate Moss cover reminds him of his mother. He quickly buys the mag by telling shop-owner Raj (Harish Patel) that it is a gift.

At school, Dennis also happens to be the best goal-kicker the football team has, under lacklustre coach Mr. Norris (James Buckley). But he also has to contend with demanding French-language teacher Miss Windsor (Jennifer Saunders) and the regimented Principal Mr. Hawthorn (Tim McInnerny).

A friendship is formed with style queen, fellow student Lisa (Temi Orelaja), unbeknown to his Sikh pal Darvesh (Aaron Chawla). Dennis is increasingly drawn to glamour through Lisa’s emerging talent as a fashionista. One day she convinces him to try on a dress, quickly followed by steps into the public where he convinces everyone he is a French-exchange student Denise. The freedom and the boundaries he can push become a liberating experience.

Needless to say, somewhere along the way the train goes off the tracks in a most-humiliating way. While the school-children are blunt with their reactions, it’s the adults who are shown to have deeper prejudices. It will take much character for young Dennis to overcome people’s perceptions at the very time when he is exploring his identity.

Walliams’ tale is never heavy-handed and manages to put context around why the central character is drawn to his new world, but without preaching. There are dollops of humour to help the audience, particularly younger viewers, to empathise with those who are individual.

Lisa is determined to break the school rules to wear more stylish clothes while Darvesh thinks nothing of being the only boy at school to wear the Sikh ‘turban’, a patka.

“It’s like you made a rule ‘You can never forget about mum,'” Dennis tells his moping father. “You have to break the rules sometimes.”

In the lead role Billy Kennedy is confident and geeky -it’s almost as if Walliams one day asked himself, ‘What if Harry Potter liked wearing dresses?’

Walliams himself makes a late appearance as drama-coach-turned-soccer-referee and can’t help himself but camp things up. Jennifer Saunders is a hoot under her wig and glasses, whileInbetweeners’ James Buckley graduates from brat school boy to lazy teacher. While there are a few ethnic stereotypes reinforced, they are complemented with more-rounded emotions.

The Boy in the Dress, which ends in a festive note, is sweet and simple charmer that works for both young and old and should be applauded for broadening a sensitive subject to a wider crowd.

The Boy in the Dress airs 6:30pm Thursday on ABC3.

TagsABC3The Boy in the Dress