The Block forced to halt production 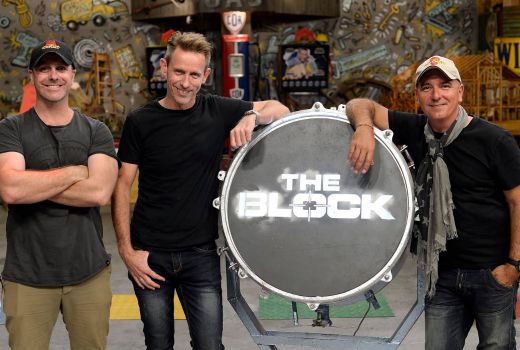 Minor Spoiler: The Block has been forced to halt production for the first time in twelve years, giving contestants an unexpected one week break.

Producer Julian Cress recently told TV Tonight the scale of the South Yarra project has proven to be massively challenging.

“Over the years from series to series people say ‘How are you going to make this bigger than the last one?’ We always say we will bite off more than we an chew again,” he said.

“So we did bite off more than we can chew and this time it bit us back. We got to a point where we simply couldn’t stay in front of the contestants, so we had to have a short break while we solved some problems and got back in front.”

While contestants were able to head home for the week, construction headaches were addressed by Production. Cress, pictured right, says the stoppage will be depicted in the show -given it is a Reality genre after all.

“We don’t hide anything,” he said.

“They had a break they weren’t expecting. We’ll finish a little bit later but that’s the nature of building.”

This year’s show launched surprisingly well given some expectations of renovation fatigue, but has since faced stiffer competition from The X Factor and The Bachelor. Despite the heat, The Blockhas remained buoyant in the demos, including with younger viewers.

Cress said they learned some lessons from its Triple Threat series, especially how it impacted on family viewing.

“The feedback we had, which was absolutely fair from mums and dads mainly, is that the length of the episodes was getting to the point where it was running past the kids’ bedtime,” he explained.

“We aim to make a family show. We want the family to sit down and watch the show together.

“When The Block is at its most successful, it’s when mum, dad and the kids can watch it together and enjoy it. So by winding it back to a commercial hour again they can do that.”

The ‘back to basics’ approach meant shorter episodes and no extended challenges eliminating couples before the main game. It was a decision made between producers and network.

“It’s a collective decision. We all sit down and go ‘The ratings haven’t been as strong as they used to be.’ And we all agreed there were some families who elected not to watch the (Triple Threat) series, because they felt they couldn’t watch it together.

“It’s how we started the show back in 2003. So we took a back to basics approach by looking at all the things we loved about the format when we started it.”

But on the question of whether audiences are sick of renovation this year, Cress is defensive.

“I think if you combined the ratings rules for House Rules and Reno Rumble, which were both screening together, then the answer to that would be No.

“There were nearly 2 million people who were happy to watch renovation.”

Despite this, Nine has confirmed it won’t be kicking off 2016 with a new season, with producers yet to confirm their next property ripe for development.

Meanwhile, Nine is optimistic fans are connecting with their cast of 5, which includes one second-chance couple and several first-time renovators.

“The audience often gravitates to those couples because they enjoy seeing people start out a bit happy but by the end of the project they’ve learned a lot and the audience has learned a lot watching them as well,” Cress said.

“So we’ve broadened the casting to include people who may come to it with less experience and will have a steeper learning curve. But we think that’s a more enjoyable process than someone who gets up everyday because it’s their trade.”

With interiors having been completed in August, work is nearing completion on the exterior. The finished product will boast 360 degree views from 5 apartments, making it prime inner-city real estate. But will they be able to top the record-breaking auctions of South Yarra’s Triple Threat when $3,165,000 was won?

“I doubt that we can. I’d be really surprised if we could top that –but I’ve been surprised in the past,” Cress admitted.

“We’re still in South Yarra and it proved to be a goldmine in the last series so we’ll see if (postcode) 3141 can pay off again for the new guys.”