Home›News›Sweet/Vicious Canceled by MTV After One Season

Sweet/Vicious Canceled by MTV After One Season

News
by The Duke

MTV cancels Sweet/Vicious after one season. Despite some significant headway for female creators in the world of film and television, women’s on-screen representation continues to be an ever-evolving and complicated topic. This is especially true when it comes to the deeply personal issue of gender-based violence, particularly rape, which has historically been depicted exploitatively and insensitively, with little regard for the portrayed victims’ basic humanity. In the world of media, rape is often used as a plot device, rather than treated as a deeply traumatic event.

One show sought to change that: last November, MTV introduced the world to Sweet/Vicious, an action drama/black-comedy about two college students who team up to take down rapists and perpetrators of sexual assault at their campus. The show revolves around the complicated relationship between sorority sister Jules and weed dealer/hacker Ophelia as they exact vigilante justice together. At the center of the show’s story is Jules’s own complicated past as a rape survivor, which the show’s creator sought to portray with due respect. Though the show filled a much-needed void in the TV world, MTV gave fans some grave news earlier today.

MTV has officially decided not to renew Sweet/Vicious for a second season, according to official reports from the network. This comes as sad news for fans and creators alike, who valued the representational work thus far achieved by the series. You can read two moving parting notes from the show’s creator, Jennifer Kaytin Robinson, and star Eliza Bennett (Jules) below, courtesy of their Twitter accounts. MTV issued an official statement regarding the cancellation, saying:

“MTV has decided to not move forward with a second season of ‘Sweet/Vicious.’ We are extremely proud of this critically acclaimed series and are deeply disappointed such an impactful show did not find a larger audience. ‘Sweet/Vicious’ was a show we loved from the start, with empowering female leads and a message we believe in. We are grateful the series started a much needed dialogue around sexual assault, and thank the talented Jennifer Robinson, Amanda Lasher, Stacey Sher and the stellar cast, writers and producers for creating such a timely and thought provoking series.” 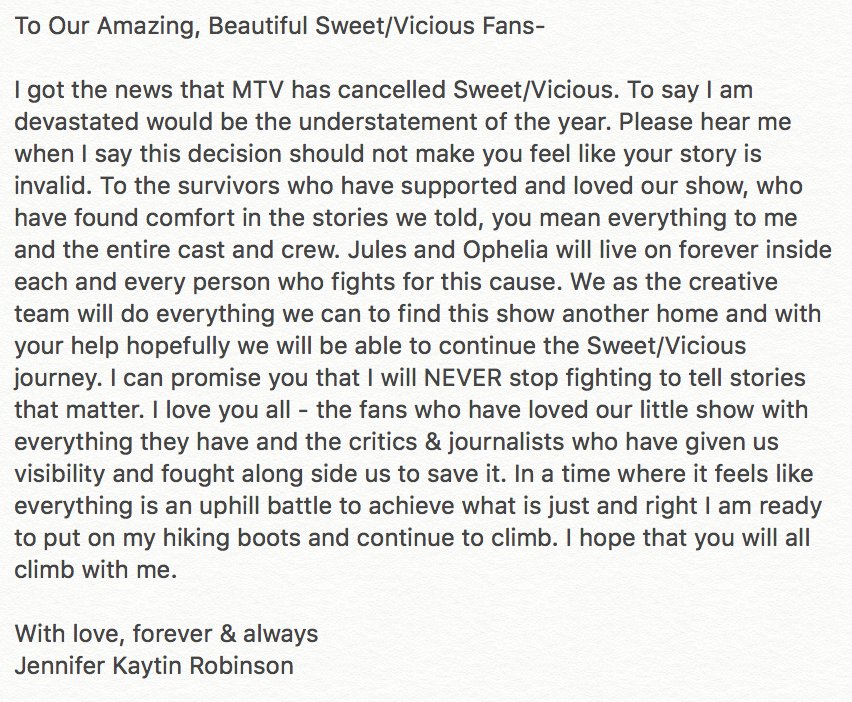 It is with a heavy heart that I write this note to the AMAZING, BEAUTIFUL #SweetVicious Fans. We all love you so much.

I write this with a heavy heart. But we continue to love you, believe you and stand with you. Thank you for being a #SweetVicious fan.

MTV isn’t just blowing smoke when they say the show was critically acclaimed – season 1 currently holds a 100% rating at Rotten Tomatoes, with Vanity Fair declaring, “political and social issues aside, this happens to be the most entertaining and nuanced show MTV currently has to offer.” The same article goes on to speak to the show’s current importance, as campus rape legislation Title IX could soon face formidable political opposition. The show was likely canceled due to underwhelming ratings: it’s most-viewed episode garnered 0.27 million watchers. To put that number in perspective, 2016’s most-watched show, The Walking Dead, claimed 11.27 million viewers last year.

Ratings aside, this cancellation news hits hard. Not only did Sweet/Vicious shed light on an ever-important issue in a creative and respectful way, it amplified the voices of new female artists. This was creator Jennifer Kaytin Robinson’s first writing credit, and allowed relative unknowns Bennett and Taylor Dearden (Ophelia) to make waves as the show’s female leads. While MTV seems ready to blame the show’s demise on its weak numbers, it’s possible something else is afoot. In an interview with Screener, Robinson said she felt the show “didn’t get the marketing it needed,” which could have contributed to its unprecedented demise. There is undoubtedly an audience for material like this; as teenage girls continue to more readily engage with modern feminist politics, this feels less like an issue of underperformance, and more like a missed opportunity.

Dedicated fans of the series undoubtedly hope that, as Robinson vowed over Twitter, this show will be able to live on after MTV, whether as a film or trans-network reboot. No matter what, Sweet/Vicious absolutely deserved more – though it’s wonderful that it ever existed in the first place.