Sorry KRudd, don’t give up your day job… 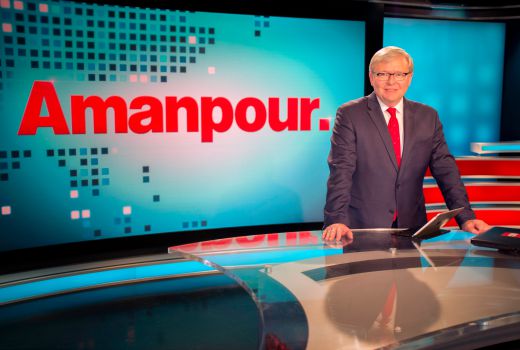 Yesterday, the ex-PM turned president of the Asia Society Policy Institute, stepped in as guest host of CNN’s global affairs show Amanpour. KRudd was filling in for regular host ChristianeAmanpour, who is on leave.

CNN introduced its guest host to the international audience, by recapping his achievements as PM: navigating us through the global financial crisis and saying ‘Sorry’ to Indigenous Australians. Fair enough. Nothing about deaths under the roof insulation scheme, the mining industry tax, costs of the Education Revolution, challenges to Julia Gillard, losing the 2013 election. I guess we don’t hear about axed shows everytime a new presenter starts a new show, either.

Hosting the show from London, Rudd was his usual stiff Rudd-speak self. While every host opens their show reading an autocue pre-amble, Rudd’s delivery took us straight back to the PM podium.

“Volatility has rocked global equities markets this week, with big falls on bourses across the world, from Shanghai to Sydney to the FTSE here in London,” he said.

“Many reasons have been given, including the snail’s pace of the economic recovery we’ve seen in Europe, now seven years after the global financial crisis began; also, uncertainty over a future rate rise in the United States, but now, too, uncertainties concerning the future of the Chinese economy.”

On it went until his first interview subject appeared, Chinese vice minister for finance, Zhu Guangyao from Beijing.

“You’ve seen a lot of commentary, also, in the recent decision by the People’s Bank of China to effectively devalue the renminbi, albeit by a relatively small amount,” he asked.

“Do you believe this could assist Chinese exporters?  Is that the primary intent, to promote growth through greater export performance? Or is it more that you are concerned about the ultimate status of the renminbi as a global reserve currency and therefore are throwing it more open to market disciplines?”

Next guest was a subject close to his heart: climate change with an interview with Professor Lord Stern, chairman of the Grantham Research Institute on Climate Change and the Environment at the LSE. Yes, Amanpour is a very serious show, in case you hadn’t realised.

With Stern in the studio there was room for a little more rapport, just.

“That’s quite a ways back,” KRudd quipped.

Next up was another satellite interview with Christiana Figueres, the executive secretary of U.N. Framework Convention on Climate Change, from Bonn.

Charged with the unenviable task of convincing governments to put the planet first, KRudd wanted her to “cut to the chase,” to give us an insight into future global governance.

No doubt something countless interviewers have wanted from him, when PM.

Things lightened towards the end when KRudd endeavoured to become sports tipster. Look out Tom Waterhouse.

He opened with some Aussie self-deprecation, courtesy of a British customs official who engaged with him at the airport.

“He says to me, ‘What do you call an Australian who’s good with a bat?’

“Respectfully, I replied, ‘I have no idea.’

“There’s only so much a former Australian prime minister can take. But hope doth spring eternal. This year’s Rugby World Cup, here’s my dispassionate prediction.

“England will be annihilated. France, South Africa, Australia and New Zealand into the semi-finals. Australia into the grand final versus either Le Bleu or the All Blacks. And Australia to win.

“But of course, as sophisticated global citizens, we don’t really care, much.”

A promised interview with SKY News / NITV presenter Stan Grant did not eventuate. But he wouldn’t be the first (ex) politician to break a promise, or the first news show to change its line-up at the last minute.

All those appearances as a Sunrise commentator didn’t loosen him up for Amanpour. If he’s looking to make this a new career path then KRudd will need to be more spontaneous, more personable than this.

As he noted on social media after the show, at least he didn’t stuff up completely. In media they reckon you should never take a holiday in case your replacement is better.

Christiane Amanpour is probably relaxing on under a beach umbrella without a care in the world.