The “Saturday Night Live” sketch started with Baldwin’s Trump discussing his list of accomplishments with Vice President Mike Pence, played by Beck Bennett. That portion of the sketch didn’t last long — Trump’s list began and ended with the confirmation of Neil Gorsuch to the Supreme Court.

Trump’s discussed his other flubs, including refusing to shake the hand of “that little German boy,” as Trump put it — German Prime Minister Angela Merkel, Pence helpfully supplied. Pence then prompted Trump about the reported on-going fight between Chief Strategist Steve Bannon and Trump’s son-in-law Jared Kushner, dressed in the bullet proof vest he recently wore in photos of his visit to Iraq. 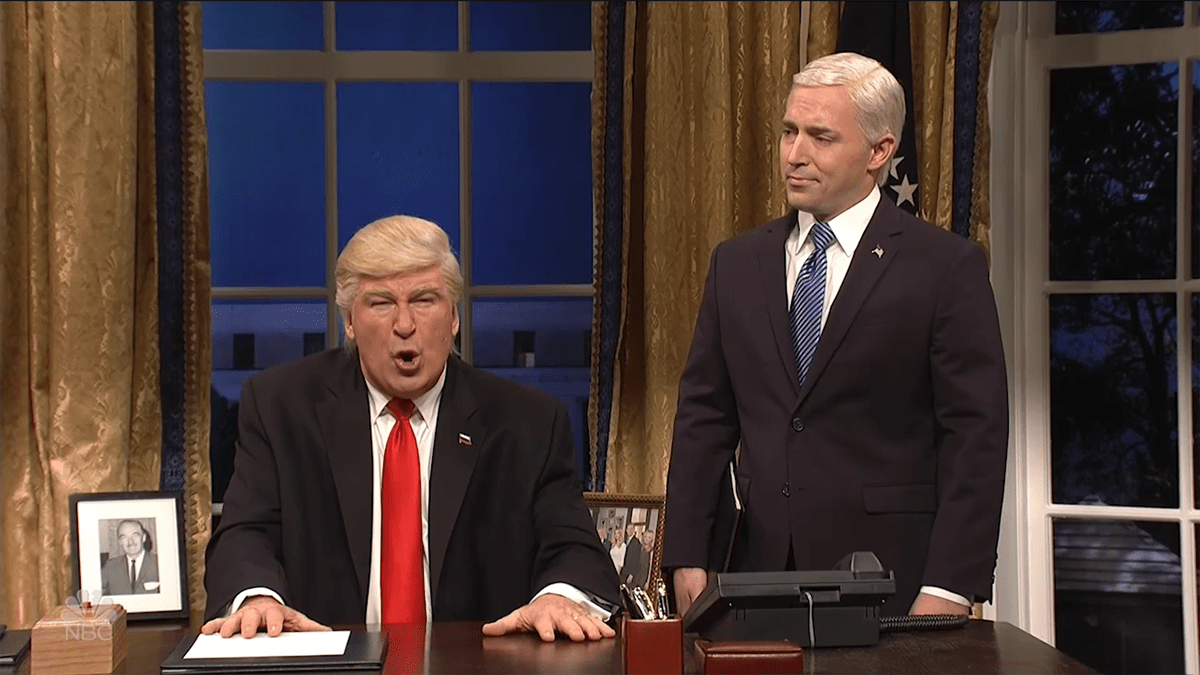 If these walls could talk... #FallonStylesSNL

Trump then called for Bannon and Kushner.

With the two advisers on hand, Pence exited. “Mother is waiting,” Bennett said. “That’s what I call my wife.”

“I know I’m bad with women but that sounds even worse,” Trump said.

“Standing before me are my two top advisers,” Trump said, evoking his time as host of “The Apprentice.” “I only have one photo in my hand. That’s right, tonight is elimination night. There’s been a lot of drama in my house. That’s okay, but one of you has to go. But who gets to stay?

“Jared, you take the most beautiful photos,” Trump continued. “Steve, you take the worst photos I’ve ever seen in my life. And I’m not joking. When I see a photo of you I want to puke.

“Jared, I’ve sent you all-around the world to represent me and no one has ever heard you speak. You’re like a little Jewish-omaly. And Steve, you may be smart, but I once walked in on you eating a live pig in the Roosevelt Room.”

Then Trump moved on to the elimination.

“Moment of truth,” Baldwin’s Trump said. “The photo in my hand represents the man who will be staying tonight. you will get to keep advising me and you will also get $100,000 courtesy of L’Oreal. If you do not see your photo, you must immediately oval office and join Kellyanne Conway in the basement. But don’t worry, your journey doesn’t end tonight because you will get to come back when the whole thing is over and decide if i go to prison. and the person that will stay on as my adviser is — Jared.”

Moments later, Bannon was escorted out of the Oval Office by a larger version of the Grim Reaper.

“Jared, you’re such an inspiration,” Trump said, congratulating the silent Jared. “You’ve shown everyone that if you’re born rich and you marry my daughter, you can do anything.”

Trump then allowed Kushner to take his desk, telling him to “Fix everything.”

“God you’re such a cute little twink!” Trump shouted after the silent Kushner refused to say the “Live from New York” tagline.

The Good Fight Gets Chaotic in Season ...