Secret nerves nearly get the better of Luke McGregor 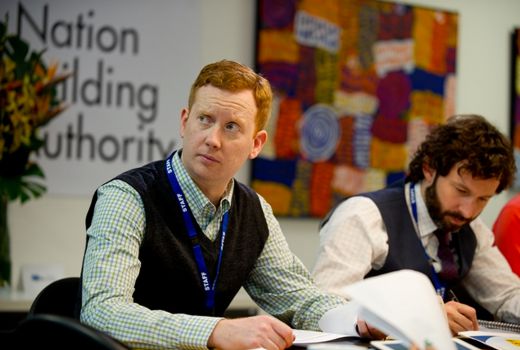 When he was first cast in ABC’s Utopia, Luke McGregor kept a secret to himself: he was a massive fan of the Working Dog team -but he was too afraid to tell his new director and co-star, Rob Sitch.

McGregor would regularly quote classic lines from The Late Show with friends, so he admits it was a bit surreal to be given a chance to join the cast, as Project Supervisor Hugh.

“I was a bit of an uber-fan, so I was just rapt. But I didn’t want to lay out how big a fan I was until the end of Season One when I basically just gushed and said, ‘You guys are the best, I love everything you do!’” he admits.

“Because I’m such a big fan of Rob’s whenever I talk to him I’m thinking, ‘Does he want to leave this point? Have I talked to him for so long he’s bored?’ So I try to end the conversation first.

“I did that once and next time Rob said to me, ‘Unless you have to go, Luke?’

“So now I won’t leave until he says he has to go somewhere.”

McGregor counts Late Show sketches, including Shit-Scared, Pissweak World and Graham & the Colonel, amongst his favourites.

“It wasn’t until later I got onto Frontline, The Hollowmen, The Castle, The Dish. I just kept watching more of their stuff and every single thing I liked.”

In Season 2 the Nation Building Authority has a new base, led by its fearless CEO Tony Woodford (Sitch). His trusty team return to battle more bureaucratic mediocrity in the pursuit of grand jingo-istic projects.

“At the end of Season One they thought they were going to get shut down but they were actually extended. Tony has a bigger team, with essentially the same cast, but there are different stakeholders and politicians coming on board.

“Tony is still being the scapegoat when projects go wrong, but the core structure is still there.

“Hugh is still Nat’s (Celia Pacquola) sidekick but he tends to go towards the brightest light.

“Even though he sides with Nat, because she’s dominant in his world, there are a few instances where someone else comes in and is a hindrance to her, but he sides with them until they go away. It was fun to play but I felt guilty anytime I was on that side.”

McGregor, who is also developing a sitcom with Pacquola, has learned much from observing the Working Dog team. He notes their ability to resolve any conflict harmoniously.

“Tom (Gleisner) does the initial draft, while Rob is directing, Santo (Cilauro) takes care of filming, Jane (Kennedy) is casting and Michael (Hirsh) produces. The main thing I feel works for those guys is they can have any disagreement and the default position is that they are still friends,” he continues.

“They go back to a place where any disagreements are ok to say without it affecting the group. There is freedom to express something without it jeopardising the partnership in any way. They’re almost like a family.

“It’s especially important in Comedy because there’s no right answer.

“So it’s interesting to watch them talk through that stuff and come back to a place of working together.”