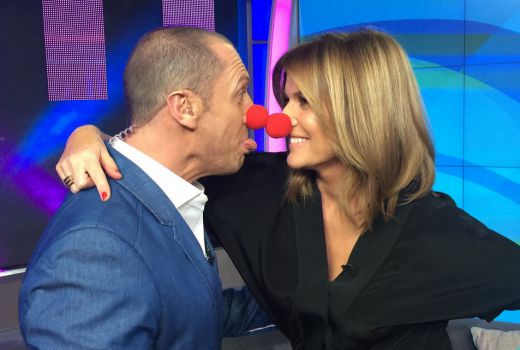 It’s been the toughest of times behind the scenes of The Morning Show.

It finished 2014 with the live emergency of the Lindt Cafe just metres from its Martin Place studio, and started 2015 with the traumatic road accident for Glenn Wheeler. But every day the show has turned on the smiles, now in its eighth year on air.

As Executive Producer Sarah Stinson recalls, “The year got off to a horrific start. It was on the 31st of January when Glenn was involved in a tragic road accident. Initial indications were that because he had sustained such serious injuries that he wouldn’t survive.

“I got a call from our News Director. Rob Raschke called to say he had a tip from someone and it involved one of our guys.

“(My friend) Ben Fordham got down to the hospital and waited all night for the family to turn up. When Kylie, Larry and I visited him in the hospital…. it was horrific. It didn’t even look like him.”

Wheeler lay in an induced coma, suffering severe brain damage but has begun his long recovery.

“It’s 2 steps forward and 3 steps back with an injury like that,” Stinson acknowledges.

“He is starting to make some signs of improvement which are really encouraging. He’s learning to talk and walk again. He does get confused and frustrated but in typical Glenn style he’s so spirited and determined. He just wants to get home to his family.”

To show their support, four networks will participate in an industry “journo jam” with news teams from Seven, Nine, TEN and ABC forming bands in a fundraising event on September 2nd at The Star.

“The financial impact is heavy but it’s really important that Glenn and his family is shown how loved he is.

“Glenn is a guy who would host anything. If there was a sick butterfly foundation he’d put up his hand to host it.”

In December The Morning Show was on air when gunman Man Haron Monis took hostages in the Lindt Cafe. Breaking news was close to home, literally, at a coffee shop frequented by the Seven staff.

“It’s part of our vernacular: ‘Does anyone want a Lindt?’” Stinson recalls.

“Marlisa was singing and Chloe my heavily-pregnant producer came into the office and said, ‘You better come out.’

“I walked out and they held up the flag and that’s when we knew.”

“Larry & Kylie stayed on air while the riot police came in”

As Martin Place was evacuated, The Morning Show kept broadcasting Live until news teams in Melbourne could take over.

“I decided to immediately evacuate the producers. In the control room there were only 5 of us left in there and we sent the non-essentials out. Larry & Kylie stayed on air while the riot police came in, with machine guns, standing behind us while we were on air.

“We kept on broadcasting until we could get Melbourne set-up and established to throw to them.

“A lot changed that day” she admits. “The team were quite affected because they know so many of the people and they go there all the time. So it was a rocky time at the end of the year and then it was not the best start, this year.

“We’re a resilient bunch and very grateful for what we’ve got.”

If there is any downside to 2015, the upside continues to be the chemistry between hosts Larry Emdur and Kylie Gillies.

“It’s a perfect on-air relationship. Because it’s real. When they love each other they’re there, they’re feisty with each other, they’ll bicker and banter, but they really care about each other,” she continues.

“If anything is too saccharine or over the top Australian audiences can see through the fakeness.

“Authenticity I feel is lacking in so many areas of life. So it’s one of the vital ingredients to our success.”

“There is plenty of pie for everyone”

The Morning Show is yet to lose a ratings week to its opposition. Despite Nine’s Morningsenjoying occasional wins over Seven -and the more recent introduction of TEN’s Studio 10– Stinson is refreshingly generous in her acknowledgement of the competition.

“I’m ok with that. The fact you have 3 morning shows just shows there is plenty of pie to go around,” she explains.

“Nothing disappoints me more than executives slamming (the opposition). It’s very short-sighted.

“Don’t bag the opposition. While there is an opposition we’ve always got a job and we’ve always got choices. There are so many other people in our eco-system who are affected by a program like ours: publicists, marketers, musicians, film industry, small and big businesses, opinion-makers.

“So if there is only 1 show on air they can dictate whatever content they want to put up. It’s not good for anyone.

“Studio 10 has been slammed in the media but I think they have a good little, original show. And I mean that. Would I do it differently? Or course I would. But I don’t disrespect what they’re doing and I don’t think they’re doing a bad job at all.

“I love Sonia and David Campbell –we were the first morning show he hosted. There is plenty of pie for everyone. I’d just like to be eating most of it.”

Soon Stinson will be answerable to new Director of News and Public Affairs, Craig McPherson (the two enjoy a long history on Today Tonight), but who is also married to Sonia Kruger. I can’t resist asking if she foresees any conflict of interest?

“I have absolutely no issue with it because Craig is professional,” she insists.

“I think Craig has bigger fish to fry.

“I’d be more concerned about their relationship than the show if he takes home The Morning Show fodder as pillow talk!

“But it is interesting. People have said, ‘How is that going to work?’” 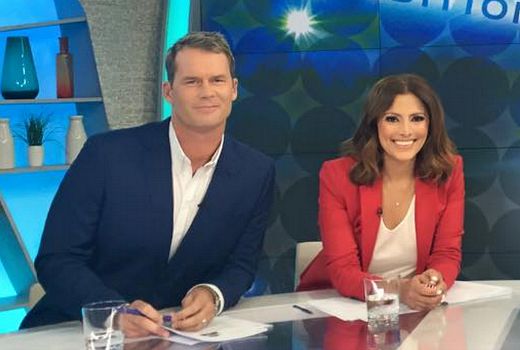 Stinson also produces The Daily Edition at 2pm each weekday, now in its second year on air.

Acknowledging the show’s brief has changed several times, along with management changes, working out the show’s personality and audience has taken time.

“2:00 is a tricky time, just before school pick-up. Is it mums getting ready, or is it an older audience?

“So it’s taken a while but the programme is definitely bedded in and doing well. After Kris Smith left we have Sally (Obermeder) & Tom (Williams) hosting with Monique Wright doing 3 days a week, and then she does Weekend Sunrise.

“Daily Edition is a talk show whereas Morning Show has live performances, cooking, stunts, and a bit more madness.

Producing 3.5 hrs of Live TV a day makes Stinson one of Seven’s secret weapons but she acknowledges the talents of those surrounding her.

“You can’t do it by yourself,” she reflects.

“I have one of the most amazing teams I’ve ever worked with. They’re such hard workers, and passionate which is good. We don’t take it too seriously.”