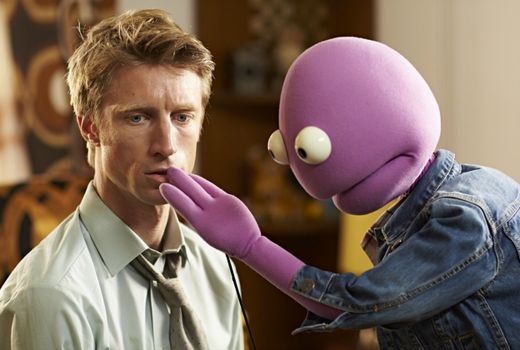 What do a purple puppet, an alpaca, a hot tub, a gimp and break-out musical numbers all have in common?

They are all part of Sammy J. & Randy in Ricketts Lane -the new sitcom coming to ABC (first via iview).

Sammy J & Randy (Good News Week, Wednesday Night Live) now share house in their 1960s brick veneer home. Sammy J is a lawyer yet to win a case, while Randy is desperately trying to win back the affections of his ex-wife, Victoria Vincent (Samantha Healy).

When neither are pre-occupied with their raison d’etre, they are constantly trying to outdo one another in petty contests. In the first episode this rivalry is ramped up when the Census comes calling and both realise how underwhelming things have become. It’s game on to better their lives quickly in order to tick the most boxes.

Randy, whom nobody ever acknowledges is a purple puppet, tries to win back the affections of Victoria -who is something of a Jana / Naomi current affairs host on her show, “Thumbs Down with Victoria Vincent.” Watching a full-on pash between them is utterly hilarious.

The Volvo-driving Sammy J. fumbles through an inept law firm headed up by a vacuous boss named Borkman (Nathan Lovejoy) who has installed a hot tub in the office and reassigns a stationery closet as Sammy’s office. There’s also the largely-unskilled secretary Wednesday (Georgia Chara) who has an unhealthy crush on our hero. Through it all, Sammy J. feebly tries to find a case, a wife, any of the above…

He is hitched to a Russian mail order bride (Sue Ann Post), more Babushka doll than buxom blonde, who moves in with her adult son and alpaca and begins barking orders: “Intercourse. Now!”

The comedy is unapologetically adult, with a leather-clad gimp and Randy J perving on his girlfriend through binoculars in Episode 2. They are rude, tawdry and lovin’ it.

Rather wonderfully, it also sees the duo bursting into song with clever lyrics and fantasy staging. When they sing, Sammy J and Randy break the fourth wall and deliver it straight to camera, before snapping back to their universe.

Under Director Jonathan Brough the show is also filmed through a brown-orange hue, which complements the low-class 70s setting. No cool Mad Men retro here, this is as drab as it gets.

The chemistry between the gangly Sammy J. and the outrageous Randy is unmistakeable and their years of performance is evident. The purple patch, cleverly filmed so that you’re left wondering where the puppeteer is hiding, gets away with offensive punchlines and Aussie vernacular that makes him instantly endearing.

With its nonsensical storylines, musical numbers and surreal universe (look out for the cameos by a Sri Lankan office guy), Sammy J. and Randy in Ricketts Lane is a breath of fresh air and attitude.