Russia is officially out of Eurovision this year after their entrant Julia Samoylova was banned by Ukraine.

It will neither have an entrant this year, nor even broadcast the event to Russian viewers.

Ukraine banned Julia Samoylova due to her performing in the Crimean city of Kerch in 2015, more than a year after Russia annexed the territory.

Last week Russia rejected two options proposed by the European Broadcasting Union, to either perform remotely by satellite, or submit another act.

The First Channel has received a letter from the European Broadcasting Union with the message that the EBU could not resolve the question of participation in Eurovision 2017 for the participant from Russia, Yulia Samoylova. This EBU report makes reference to the decision of the Ukrainian Security Services.

The First Channel finds the Ukrainian refusal completely unreasonable. The reason for it, of course, is Ukraine’s attempt to politicize the contest, whose goal throughout its 62-year history has been to unite people.

The European Broadcasting Union still offers the option of remote participation from Yulia Samoylova or her replacement with another participant. But First Channel has said both options are unacceptable.

A remote performance discriminates against the Russian participant and is contrary to the rules and principles of competition. Yulia Samoylova’s replacement with another artist, in our opinion, cannot even be considered.

In this situation, the First Channel does not consider it possible to broadcast the Eurovision Song Contest 2017.

“These proposals were to either take part via satellite or to change their chosen artist to one who could legally travel to Ukraine for the duration of the Contest. Sadly both proposals have been rejected by Channel One and they have now announced they do not intend to broadcast the Eurovision Song Contest 2017. Unfortunately this means Russia will no longer be able to take part in this year’s competition. We very much wanted all 43 countries to be able to participate and did all we could to achieve this.” 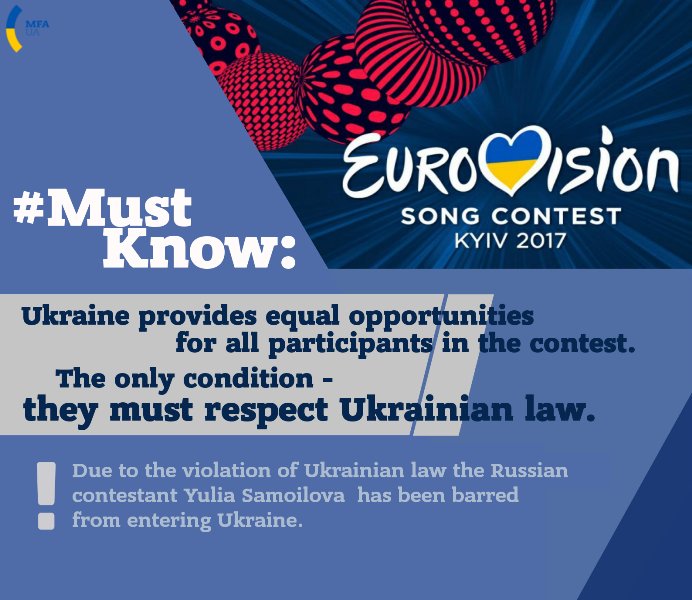 #Ukraine provides equal opportunities for all participants in the contest-the only condition,they must respect Ukrainian law #Eurovision2017