10 of the most destructive-looking robots from series 8

CAUTION: not suitable for letting loose in your lounge. 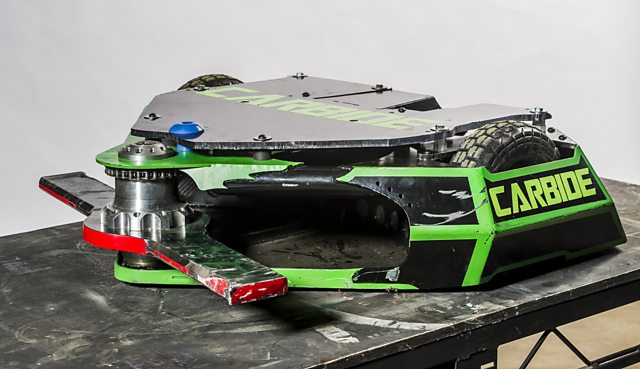 Carbide has a powerful 25kg, 85cm long horizontal bar spinner made from plate steel normally used as armour on military tanks. At its maximum speed, the impact of a hit from Carbide’s blade has 60 times more energy than a sniper bullet. Operating at 20 horsepower, it can reach 2300rpm. 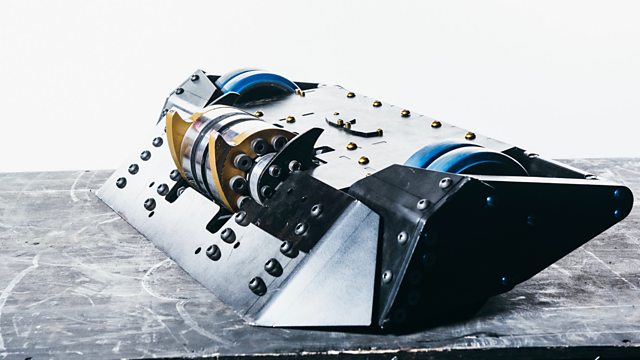 Pulsar’s weapon is a ‘single tooth’ drum flywheel with an aerospace aluminium core. The weapon weighs 14.5kg and rotates at up to 9000rpm (or 220mph), the fastest in the series. Pulsar’s flywheel beats the air 140 times a second, which generates a siren-like sound, and the stored kinetic energy surpasses that of a .50cal sniper rifle bullet. The team say Pulsar will be able to toss opponents into the air simply by force of the weapon. The robot has a number of 3D printed parts inside and has a unique drive system, featuring modern sensor-less brushless electric motors intended for large model aircraft. 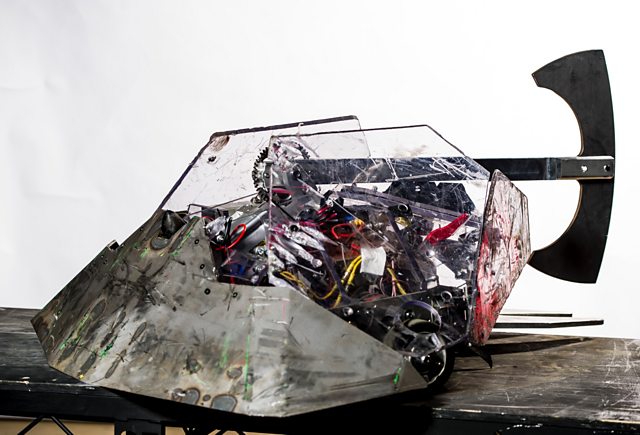 Terrorhurtz is a polycarbonate-armoured robot with the biggest axe in the competition - a 90cm long, Titanium, high-power axe, which fires at 100mph and generates one tonne of force. The team’s axe is intentionally blunt, as they are trying to ensure maximum trauma to the interior working of their competitor’s robots rather than puncture their armour (although they think that may happen too).

M.R. Speed Squared has an enormous full-body kinetic energy disc. They have interchangeable weapons which they can attach to the disc depending on their opponents’ weakness. These include heavy weights and spikes. M.R Speed Squared’s weapon fully protects the body and wheels of the robot, but could be susceptible to attacks from an axe. This is the only robot in the competition with a 360° full body spinner. 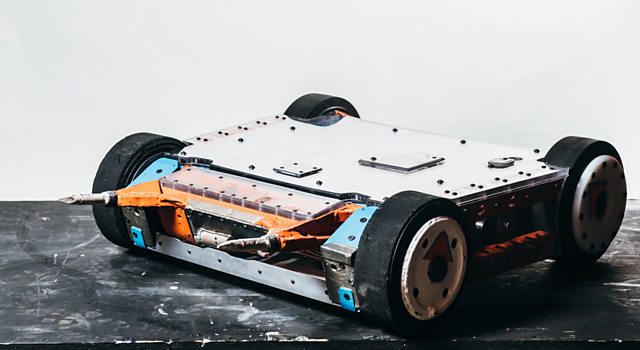 A previous Robot Wars competitor, under the name King Buxton, King B Remix is a Flipper and Ram-bot which has been rebuilt using “the best parts and philosophies from each of its previous evolutions,” with 30% of its current make-up dating back to 1998. King B Remix uses its front steel spikes to ram opponents at 14mph, and sometimes uses flipper robot opponents as launch pads to ‘take to the air.’ It has never taken more than an afternoon to repair any damage made to King B – except on one occasion where it was almost cut in half by Sir Killalot (Series Five). 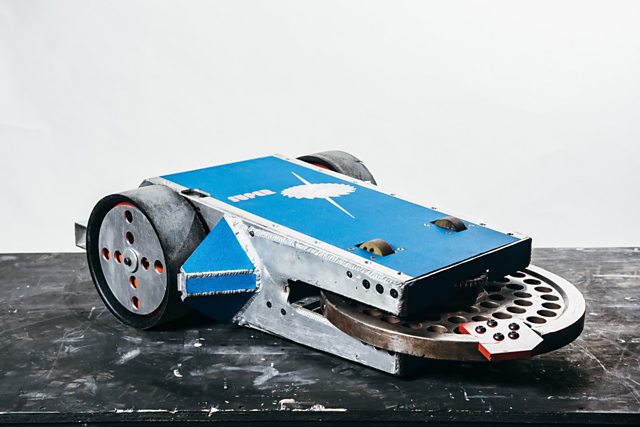 Supernova is a powerful spinner robot, whose blade rotates at 2,500rpm and is made from 22kg of 12mm of steel. The blade is so powerful that it bent upon testing. The team believe their blade can reach its full spinning potential much faster than most other robots of its type due to the powerful motor they’ve fitted, rendering it an immediate threat to its opponents. 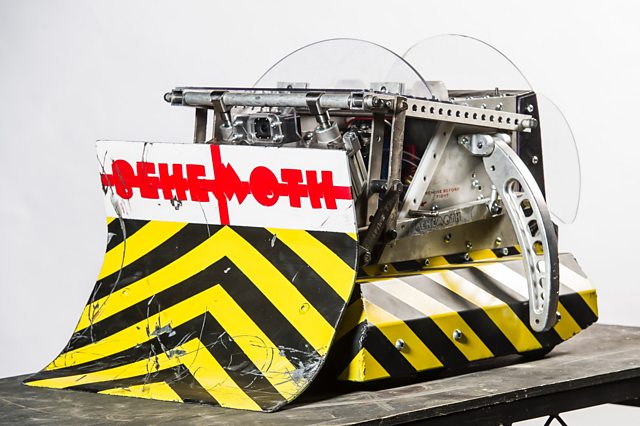 A large, powerful and manoeuvrable bulldozer-shaped robot with a pneumatic lifting scoop/bucket (operating at 10 bar) that can lift a Peugeot 205 off the ground. The robot is also powerful enough to tow a Land Rover. 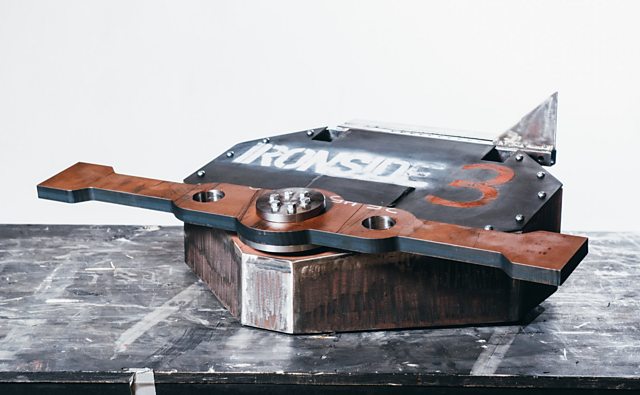 Ironside 3 has the longest and heaviest spinning bar weapon in the competition – one metre long and weighing 35kg (about a third of its whole weight). The bar spins at 1,500rpm – which is three times the speed of a helicopter’s blade (an average of 460 rpm). Due to the extreme gyroscopic effect that the blade has at full pace, the robot will appear to ‘dance’ and generate sparks every time it hits the floor. 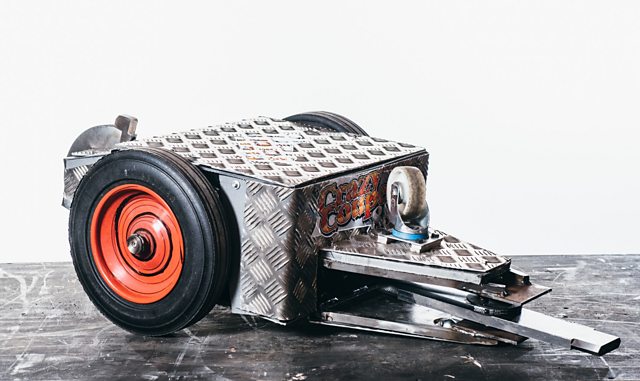 A two wheeled robot with twin rotating weapons – including a 17 inch horizontal spinner which rotates at 2450rpm and a rear vertical spinner which can also act as a lifter. The robot is fully invertible and so can work upside down. The team think having a weapon at both end of the robot will give it an advantage in fights. Its drive system features two scooter motors. 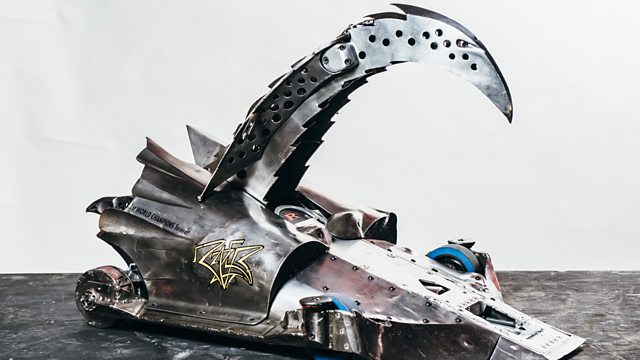 Razer is a wedge-shaped robot with a ripping hydraulic piercer which applies three tonnes of pressure – more than the weight of an adult hippopotamus. Razer was created in 1998, and is one of the most iconic returning robots from the previous Robot Wars series, with the most wins (41) of any robot to compete on the show.

Autism and Christopher Eccleston: The A Word ...