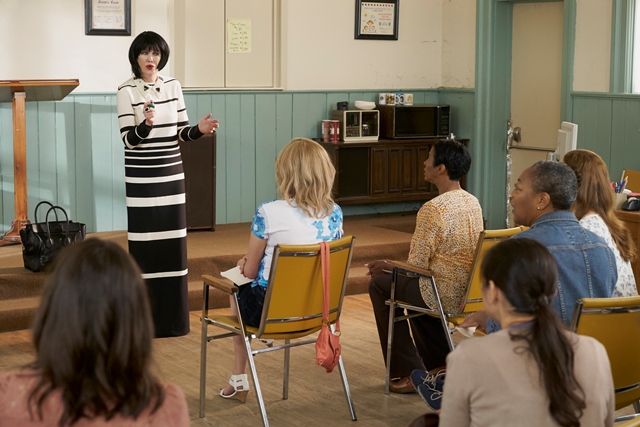 The first two episodes of season two were good, but did not measure up to season one for me. Episode three is a showcase of talent. It’s a one-two-three punch. It goes from one vignette to the next. One brilliant line to the next.

The show starts with Moira and David discussing “the perils of owning cashmere” after David finds moths have found their way into “a triple locked titanium suitcase.” In that same moment we have yet more proof that Moira is not going to win the Mother of the Year Award when she insists to David that she had breakfast with Alexis yesterday (her daughter has been with her new boyfriend for a week and a half). David says, “That was me.” To which Moira replies that she and Alexis had a “lengthy conversation about hosiery and menopause.” David’s response was simply, “Again, that was me.”

We find Johnny in his “office” in Bob’s garage spending more time with Bob’s clients than Bob. But the scene where he proudly tells Bob that he sold the ‘93 Buick and how there are “certain instinct that you don’t lose…it’s like riding a bike” is priceless. Bob quips back in his typical deadpan, “it’s interesting that you use that phrase because Dick Sinson is going to be riding a bike until I can get his car back.”

Things continue to be tense and sarcastic between David and Stevie as David decides to build a cedar chest for his “knits”. I think I enjoy this dynamic between them even more than the friendship/lover relationship. But both work equally well. In the end, Mutt builds the cedar chest for David. This is the first real interaction between these two and they do not disappoint.

Moira, it seems, has not fallen from her high horse after the embarrassing false exit from Schitt’s Creek. She finds out there is a singing group in town called the Jazzagals and she decides to condescend and join the group. When told she will need to audition, she says, “in the actual world of entertainment I’m what’s known as offer only.” Jazzagals won’t budge. So she goes to “showcase” her talent, telling them they can call it an audition or “an evening with.” When she hears their lead singer she is taken aback and clearly nervous. Her “audition” is not good. The show ends with her singing softly in bed to Johnny, still not sure if she’s in the group.

US adaptation for Upper Middle Bogan!