Noni: Reliability a win for Place to Call Home viewers 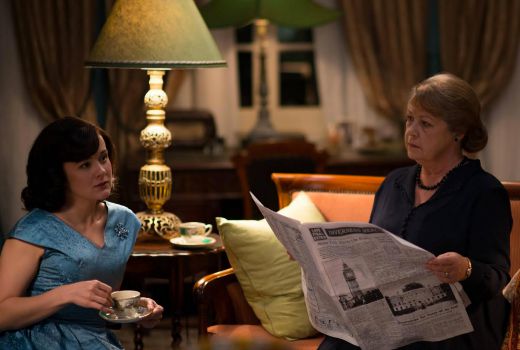 Noni Hazlehurst always believed A Place to Call Home would have a continued life, despite it being axed by the Seven Network after only two seasons.

She was one of many instrumental forces behind the scenes, even joining the Save A Place to Call Home campaign.

Despite a costume sale and sets being destroyed, the show has a third season thanks to Foxtel, and there are definite benefits in it switching to Subscription TV.

“For me the greatest advantage is for the audience, knowing that it will start on reliably time every week. I think it’s really important. It gives me the willies as much as it does any other viewer, when start times change and schedules change at the drop of a hat,” she says.

“So the reliability of the service is wonderful, and so is the On Demand feature.”

Having two seasons guaranteed also affords the writers the luxury of cliffhanger storylines that can be satisfactorily paid off.

“We had initially one season with further single year options, so there was always a 6 month period between wrapping and going to air where you didn’t know whether it was going to happen again. That had important consequences for everybody involved,” she continues.

“There has been attention already drawn to the fact that none of the characters were ever allowed to smoke when Seven was airing the show. Obviously people in the ‘50s smoked like chimneys. So we always felt like that was a shame and we would try to work it into the background for extras as much as we could!

“People have also said it’s getting ‘sexed up’, but that’s absolute rubbish. Those issues, when appropriate, we’ve never shied away from and we’re not going to now, either.

“I think we went to some pretty dark places on Free to Air. Sarah’s storyline was hardly The Sound of Music.”

Creator Bevan Lee, while not having penned any of the new episodes, did chart both a 3rd and 4th series, for new producers. Hazlehurst, acknowledging the melodrama styling, says the content and characterisations are more complex, against our social history.

Attitudes to homosexuality in the 1950s, is one of the show’s progressive themes, and is an example of how the series explores change. There is more to come for the character of James Bligh (David Berry).

“It certainly doesn’t go away as a theme, nor should it. But I think it will continue to be a talking point and that’s a good thing,” she says.

“We’re minisculely edging towards it not being an issue as opposed to it being a monstrous issue, that keeps people awake at night, supposedly. It’s so unimportant in the scheme of things, really, but it’s wonderful to have this look-back at how much people suffered and how awful (it was). If people can empathise with that level of secrecy then perhaps they can be a little more supportive of people now.”

Similarly, there is change ahead for her own character, matriarch Elizabeth Bligh, having left Ash Park to son George (Brett Climo) and the ambitious Regina (Jenni Baird).

“It’s pretty clear that Elizabeth is in a transitional point in her life. It’s something I can relate to because my kids have left home and they’re out in the world, so you have to redefine yourself as a woman who is not primarily a mother. That’s exactly the point in which Elizabeth finds herself, but magnified quite a lot because it’s her whole existence that is coming into question at the moment: her whole raison d’être, morality and the way she’s lived her life,” she explains.

“So she’s in for some soul searching and is looking for a role, basically. It’s an interesting point because she’s had humility forced on her by her own actions. So a few of the layers have to be peeled away, which is quite confronting for her.”

It is the mix of social attitudes, lavish setting, emotive storylines and a rich ensemble that drove fans to campaign for the show’s return. On Sunday they will be rewarded for their passion when high drama returns to the Ash Park setting.

“I think people appreciate it is not just happy families getting along or living in a suburban bubble,” says Hazlehurst.

“We know so little about or own social history, that I think people love seeing the perspectives of Australians at that time, comparing it to now and asking whether we’ve changed or not?”

A Place to Call Home returns 8:30pm Sunday on SoHo.