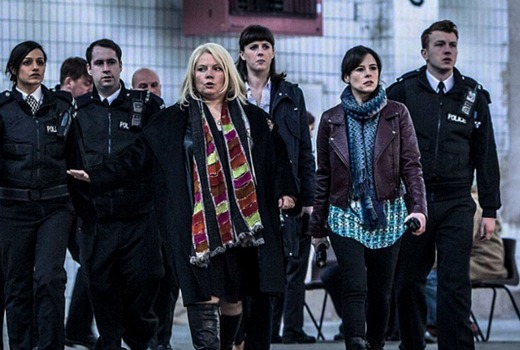 UK writer Paul Abbott has a way of finding the light in the most gloomy corners of the British working classes.

Shameless lasted for 11 seasons as he mined his own upbringing to breathe life into the chaotic Gallagher family. For No Offence he turns his attention to a crumbling cop shop in Manchester.

The central character is D.C. Dinah Kowalski (Elaine Cassidy) who spots a wanted suspect, after a night of drinking and dating ends badly. When she gives chase the man is accidentally hit by a bus -at which point she makes a poor decision to walk away.

As a result Kowalski misses out on a promotion to Sergeant, but it doesn’t diminish her drive for justice. With a nose for trouble she uncovers a link between a dead body, a missing girl and drowned woman -all three being Down Syndrome girls.

She convinces her seasoned boss D.I. Vivenne Deering (Joanna Scanlan) to revisit previous cases and see what they missed if they are to stop a serial killer.

Normally procedurals with serial killers are particularly dark -think Dexter, The Following, True Detective, Hannibal– and while No Offence doesn’t present as comedy, it is decidedly lighter than most due to the idiosyncrasies Abbott weaves into his characters.

Joanna Scanlan, previously seen in Getting On, is brimming in lines and nuances that don’t subscribe to conventional cops. Sitting on the loo singing Motown? Yup. But it is Elaine Cassidy (The Paradise) as Dinah Kowalski who has the lion’s share here, portraying a hard-working, heart-of-gold and impulsive cop who made a bad decision.

That Abbott has females as his key characters (Alexandra Roach as D.S. Joy Freers is another) is real point of difference from his work on Shameless. Lead males include Will Mellor as D.C. Spike Tanner and Paul Ritter as forensics expert Randolph Miller, prone to bad jokes and clumsy timing. Manchester’s urban slang -and accents- provides a strong sense of place and community while the direction allows the ensemble to imbue dimensional characters.

In fact the procedural case takes a backseat to the character work going on here.

Interestingly, the music also has an acoustic, almost country feel to it, which hints that this isn’t likely to take a traditional path across its 8 episodes. With Paul Abbott’s track record, would you expect anything less?

This is the first of two new UK police shows debuting on ABC this week. While No Offence is detectives in Manchester, Saturday’s Cuffs is plods in Brighton which sadly was not renewed.

Carla’s trapped by Tracy, who shows her ...