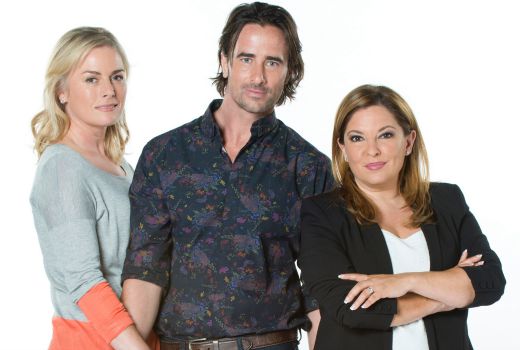 In a Neighbours first, next month it will screen an episode that features just three characters.

Episode #7202 will bring to a head a love triangle of two and a half years between Brad (Kip Gamblin, pictured centre), his wife Terese (Rebekah Elmaloglou, right) and Lauren (Kate Kendall, left).

Staged in two households on opposite sides of Ramsay Street, the action manages to encapsulate 3 of the 5 stages of grief: Denial, Anger, Bargaining -with Fear thrown in for good measure.

It even reaches a crescendo in a classic soapie-style pool dunking.

Kip Gamblin, Rebekah Elmaloglou and Kate Kendall all get to chew the scenery, rather like a play and their commitment together with the unique approach is what separates this from other episodes. Fans will doubtless look back on this as one of the more memorable stories.

It’s rare for a drama to follow so few actors for the duration of an entire episode. In the US these are commonly referred to as “bottle” episodes, using minimal cast and sets. Star Trek, Breaking Bad, Community, The X Files have all featured episodes in which key characters are confined to few locations, although usually for budgetary reasons. In Australia it’s less common.

It airs at 6:30pm Tuesday September 1 on ELEVEN.

Emmerdale: Emotions are high at the memorial ...