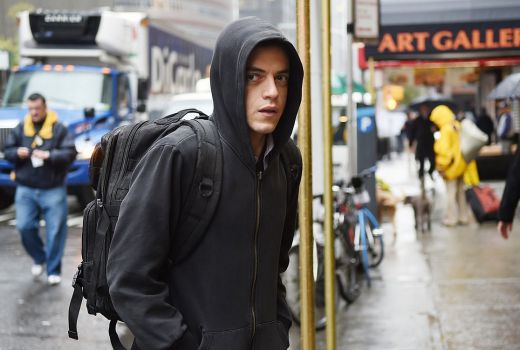 He knows the secrets of his colleagues and the private life of childhood friend Angela (Portia Doubleday), including that her boyfriend Ollie (Ben Rappaport) is lying to her. He even knows the inner secrets of his psychologist Krista (Gloria Reuben).

But Elliot (Rami Malek) is addicted to morphine and dysfunctional when it comes to relating to individuals. Working as a security technician at Allsafe Cybersecurity, he rejects workplace friendships and discourages affection -to the point of not liking to be touched. As Mr. Robotunfolds we learn of a troubled childhood that has shaped this skilled yet stilted young man.

Peering cynically at the world from behind his hoodie, he sees his major client E Corp as ‘Evil Corp.’ He hates Facebook and social media is described as a ‘hoax.’

“The world’s top 1% play god without permission, and now I think they’re following me.”

When Allsafe is the target of a DDOS attack, Elliot rescues the company but is sent a message from the hackers, known as fsociety, who seek to recruit him. Through a series of hidden codes, infected servers and shadowy figures on the New York subway, he meets Mr. Robot (Christian Slater) -a tech anarchist who has a mission for the talented, detached Elliot. Oddly, it becomes a way to belong.

With his striking features, Rami Malek (The Pacific) is a stand-out in this cool, street-smart drama, in an under-stated performance notable for its stillness. A whispery voice-over allows us insights into Elliot’s thoughts -you’ll enjoy him smashing various pop-culture names from Steve Jobs to Josh Groban. I also haven’t heard too many American scripts use the phrase “D***head.”

Writer / producer Sam Esmail has crafted a flawed anti-hero for whom we manage to find sympathy, and imbues a wry script with smart dialogue that challenges the viewer. Director Niels Arden Oplev also frames his story creatively, especially with stylish shots of the New York corporate world and skyline.

Of course all this cynicism being directed at greedy multinationals is ironically being produced by NBCUniversal -a bit of pot calling the kettle black?

There’s no denying the confident start by Mr. Robot. It’s better than similar geek dramas,Scorpion, Numb3rs and even Chuck. As it raises themes of power and espionage, this is possibly the closest television has come to its very own Occupy Wall Street.

What it chooses to do with that, will be the next question.