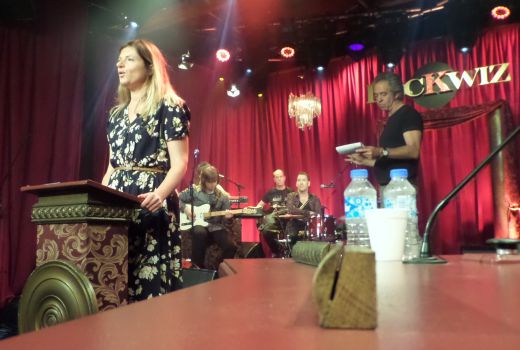 You will need plenty of patience, winter gear, suncream, gumboots, Google Maps, camera, phone, back-up batteries, water, and a good knowledge of the best places to park your car.

Yes, these are just some of the essential tools required for a set visit. I’ve done more than I can remember, from watching Lachy Hulme scream as Kerry Packer on Howzat! to licking a toxic rubber chicken on Camp Orange at Sea World (don’t ask!).

I’ve hot-footed it from Today at Crown Melbourne to Sunrise at Federation Square, both squeezed in before their 9am finish, without telling the other I’d crossed over to the dark side. 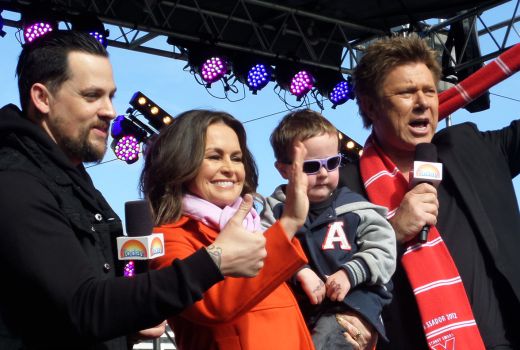 I’ve sat in a mini-bus on the way to visit Big Brother at Dreamworld when it was sideswiped by a car and nearly took out half the country’s entertainment journos.

I’ve watched Miss Fisher running inside the Polly Woodside ship and tried to act cool hanging with Matt Lucas and the teams on Talkin’ Bout Your Generation.

I’ve interviewed Elmo in person (twice) and Randy J, remembering to look at the puppets despite interviewing the puppeteers (I was even lucky enough to man-handle Randy J -first journo ever!).

And I’ve tried not to get nervous when Vince Colosimo waved around a fake gun on Jack Irish. He’s so darn convincing.

Yes, attending set visit sure sounds like a charmed life. And no complaints, it is most certainly colourful. 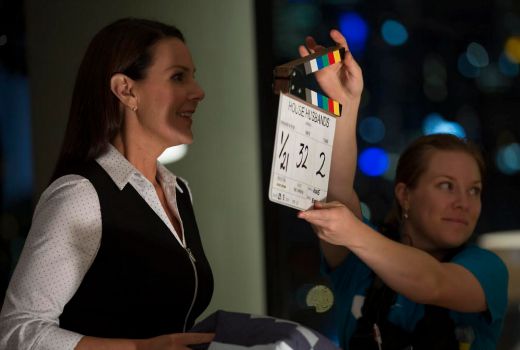 A set visit is arranged through a publicist (usually a network publicist, occasionally an assigned ‘unit’ publicist). You’re given a random address somewhere in suburbia to meet at Unit Base, which is usually identifiable from the trucks and a discreet sandwich-board by the roadside. So as not to attract attention it may simply say ‘HH Unit’ (House Husbands Unit) or in the case of Schapelle‘Doc McGee Unit’ -to avoid rabid protestors.

Most productions involve waiting against the elements: for lunch to end, for a scene to finish, for cameras to be in place, for a late schedule to get back on track. Followed by more waiting. Interviews are usually conducted in the most random of places, wherever the talent happens to be during the window in which they are available.

I’ve sat with Richard Roxburgh in the middle of a park while we both kept moving the chairs to bask in the sun, I’ve sat with Deborah Mailman in the back of a mini-bus while it poured with rain during Offspring, I’ve listened to Bert Newton’s glory day stories inside his old dressing room, blanked entirely as Dustin Clare described wearing a ‘sock’ for nude scenes on Satisfaction, and forgotten the name of the latest Neighbours kid I was interviewing while I was interviewing him.

Often you end up watching a scene in a ‘split’ monitor in the back room. Ironically it denies you the live experience you’ve come for and is something of a paradox. 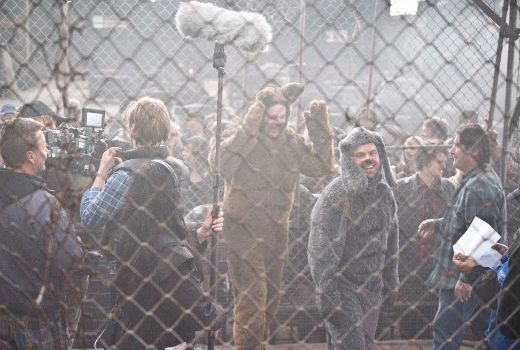 Amongst the more memorable highlights: getting a dune buggy ride on Bondi Rescue, helping Channel [V] choose Billy Russell at his final presenter audition, letting a Channel Nine publicist do all the cooking during a fake Great Australian Bake-Off challenge (thanks!), having personal tours of GTV9, TCN9 and Martin Place studios, trudging muddied through Gallipoli‘s Lone Pine battle scenes, watching the INXS: Never Tear Us Apart boys rock it out, hiding in an office just before a kid is surprised on Prank Patrol, watching ABC News Breakfast from the control room, cheeringWilfred in a cagefight, anything involving SlimeFest and attending an honest to goodnessNeighbours wedding.

By contrast a visit to SBS miniseries Better Man hung heavy with despair -not easy to capture on a set. 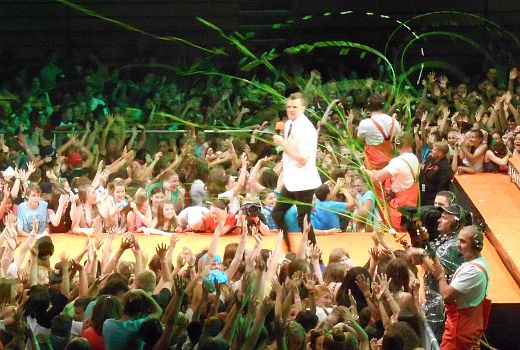 There are the stars that are born charmers: Craig McLachlan, Lachy Hulme, Shaun Micallef, Rob Carlton, Julia Morris, Don Hany and the Working Dog team -these guys go out of their way to make you feel relaxed (I’m sure there are others I’m forgetting!).

I’ve played off-camera rounds of Million Dollar Minute (I was pretty crap), Million Dollar Wheel of Fortune, 100 to 1 and a personal favourite, RocKwiz (did ok there). You gotta love the ones that let you participate, but I declined Q & A‘s invite to stroll past Tony Jones in the promo.

And the visits that tested me? Any season premiere or finale of Dancing with the Stars, but that’s nowhere near as long as The Voice dragging on for 7 hours (I admit I waited to meet Kylie), a bus trip to the Recruits police academy in Goulburn on the day Kevin Rudd was being toppled (aargh!), a bus to forgettable Sydney homes on The Renovators and yet another bus trip to a Bankstown aerodrome to stand behind a crowd of punters watching Top Gear Australia (“Where the hell am I?”).

Most annoying interviews: any one where the publicist is looking over your shoulder and jumps in when you ask a question too clever. Most difficult task: trying to fake enthusiasm when you know the show is a dog. Sharing set visits with another journo can be heaven (you’re in this thing together) or hell (goodbye exclusive). And after a 15 minute chat you’d better wind it up before the talent gets bored and the publicist gets gnarly. 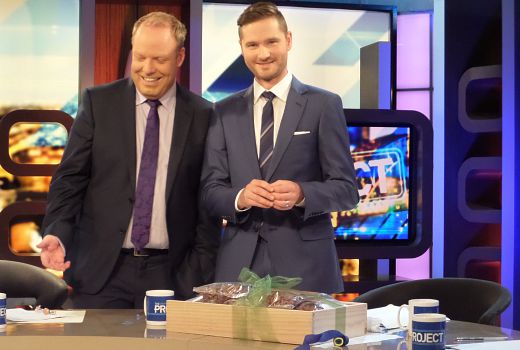 I’ve actually visited very few Reality shows during shooting. MasterChef cooking is notoriously slo-o-o-o-w, so was Iron Chef Australia -and that even had an audience! Think that’s bad, try the Project Runway sewing room. The Block is diligent in inviting me to before / after renovations, but at least I don’t have to watch paint dry.

But if I had to choose a personal favourite, it’s hard to go past my very first set visit all the way back in high school: a day on the set of Prisoner interviewing Fiona Spence and being grabbed in a headlock by the one and only Val Lehman.

Yep, colourful memories every one of them.