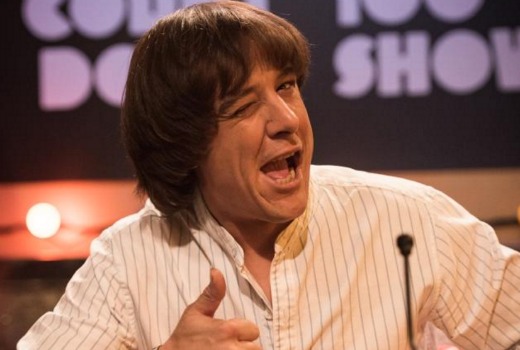 Sam Johnson is given an impossible task in recreating Ian “Molly” Meldrum.

As someone so heavily entrenched in our hearts -known by just a single moniker- Molly‘s face, voice and mannerisms are unmistakeable. Most impersonations have leant towards the comedic (Michael Veitch, Stephen Blackburn) while the dramatic representations (Grant Piro, Andrew Ryan) have kept things brief. Now a 2 part mini-series puts the man who is shy about celebrity, front and centre.

This Mushroom Pictures saga frames Meldrum through the prism of Countdown backstage (so much so, it probably should have been branded as a Countdown miniseries). Liz Doran’s script, based on Meldrum’s own autobiography, dramatises the story we largely already know: the guru who championed Australian music. It is a rock and roll valentine to raw Aussie music, awkwardly pushed out through the brown-suit bureaucracy of the ABC.

It begins more recently, with that famous fall from the ladder at his Richmond home. As Molly drifts in an out of consciousness beside his beloved pooch Ziggy, flashbacks take us back to an era of Datsun cars, cartridge tapes, beer and ciggies and “the Skyhooks.”

Strictly speaking, this overlooks that Meldrum had already worked with both on Channel O’sKommotion, and it by-passes living with singer Ronnie Burns, writing for Go Set magazine or befriending singer Lynne Randell (she will come in episode 2). But it does acknowledge his music producing career through Russell Morris’ iconic The Real Thing, even tinkling the “ooh-ma-ma-ma” riff on the piano as a child. Who knew?

On board what will become Countdown, Meldrum convinces young music entrepreneur Michael Gudinski (Aaron Glennane) to let Skyhooks open their Friday night show. ABC exec Alan Wade (Benedict Hardie) is never quite sure what to make of the reckless, rule-breaking Meldrum and his bohemian friends, and the feeling is mutual.

“It’s the blind leading the bloody tone deaf over there!” Meldrum shouts.

Despite Wade’s best ABC Charter demands, Countdown rates with viewers and is upgraded to a 6pm Sunday slot, with full colour.

In his private life, Meldrum lives with transsexual Caro (Ben Gerrard) but develops a relationship with girlfriend Camille (Rebecca Breeds). Amid the frenzy of a vibrant workplace, he is also drawn to male crew member (but it carefully avoids specific liaisons with young pop stars, despite sex going on in dressing rooms around him). There are self-doubt moments and his reluctance with fame, especially when Shrimpton convinces him to move on camera, in his own music review segment.

“You really want all of this on national television? It doesn’t look any better when you put a camera on it!” Molly insists.

As Countdown‘s star rises, so does Meldrum’s and the power he wields in breaking new music acts. The show turns unknown John Paul Young (Connor Crawford) into an overnight star, Meldrum is accused of payola briberies and Prince Charles (cleverly juxtaposed beside Johnson via CGI) appears in that interview where Molly is a bundle of nerves.

References to family are brief, seen in flashback with his mother (Kate Atkinson) and grandmother (Julia Blake), but there is a nice scene visiting Quambatook with Caro. Molly privately admits to being bisexual following a courtcase in which a lawyer asks if he is homosexual, but amazingly it avoids any intimate male scenes for the entire opening 2 hours, preferring to focus on ABC backstage drama.

Amongst the cast Ben Gerrard as Caro is excellent, notably giving us so much in one scene without a single word. Tom O’Sullivan also impresses as producer Shrimpton, the voice of reason throughout so much chaos. Some of the Countdown re-creations are spot-on, filmed in the original ABC studios at Ripponlea. Skyhooks look so convincing they could have their own drama. I laughed out loud at Split Enz in the ABC cafeteria -and watch for a cameo from Hamish Blake.

Which brings me to the star himself, Sam Johnson. His performance is solid, committed to showing the erratic, inspiring, reluctant Molly in the 1970s -but I have to be honest, I did struggle to see Meldrum. Perhaps because we know him so well, or because Johnson played him as an alpha-male, he remained elusive for me.

Bizzarely, the miniseries neglects to show us how he got the Molly moniker and it was remiss in failing to mention him effectively launching ABBA in Australia (if there were music rights issues, it should have been noted some other way).

Part II appears to focus on the 1980s and Live Aid (Seven only released Part I for review yesterday) so I can’t say with any certainty if it will include the Hey Hey it’s Saturday years, Melodian Records, his anger over Nine’s Molly Roast, his long-term partner, love of Thailand, adopted son, Moomba King or questions about his age and appearance. As recent weeks have shown us, even 12 months is full of drama in the life of Meldrum.

Molly is an entertaining  flashback to a unique force in Australian showbusiness, and the glorious TV era of Countdown. While Johnson serves up Molly the character, the script could have gone further into Meldrum the man.

But as we are reminded, the spotlight proved a difficult relationship.

“You love the attention,” one character suggests.

“Trust me not all of it,” he replies.