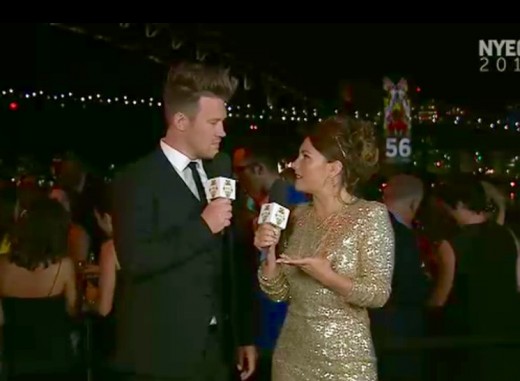 Print media News Corp and Fairfax have both taken aim at ABC’s coverage of New Year’s Eve,drawing upon social media remarks that labelled it “a train crash” and “abysmal.”

Kicking off 2016 it looks like the culture war is far from over.

Stories were also picked up by Daily Mail and NZ Herald.

The headlines are deja vu for Aunty who has drawn criticism ever since it took the rights for the 2014 event.

Back then an ABC executive told me I had “lit a brushfire” after I first reported viewer anger early on New Year’s Day, which was subsequently reported by media far and wide.

I rejected the claim advising that “No, I simply got to the fire first.” I’m comfortable that history has shown I was right -it was a technical hot mess that failed to support its presenters.

But in my view ABC has learned much since then about ways to improve the broadcast, and whilst I didn’t see 100% of this year’s event I saw enough hours to make me feel the criticism this year is not warranted. Sure, it wasn’t without room for improvement, but it is an Outside Broadcast and we seem to be forgetting negative comments that have pervaded other broadcasts of major events. If you look hard enough on Twitter you can find negative comments for any show (the #abcnye hashtag was also used by American ABC viewers).

This year’s broadcast consisted largely of pre-recorded, Live and concert footage with links by Eddie Perfect and Ella Hooper. It was preceded by ABC children’s presenters for the family fireworks (which may explain one Twitter remark that it was “immature.”) Perfect and Hooper may not have developed chemistry as yet, but soldiered on thankfully without having to fill the aimless airtime and battling sound problems of 2014.

Lawrence Mooney’s Pub Quiz 2015 was a hoot -if ABC is still looking to replace Spicks and Specks it’s sitting right under their noses.

If I have any criticism of this year’s event it would be that the music acts chosen, mostly from the Falls Festival, weren’t broad enough for the audience that is most likely to be home (Hilltop Hoods, Peking Duk, The Merri Soul Sessions, Foals, Bloc Party and The Wombats). I also didn’t get a sense of the Entertainment on show in Sydney itself. But compared to what went down in 2014 these are minor misgivings.

Richard Finlayson, ABC Director of Television said: “The Sydney New Year’s Eve fireworks are an iconic annual event that brings the nation together. ABC is the home of big national moments and celebrations and we’re delighted that our night of family entertainment brought so many people to the party around the country.”