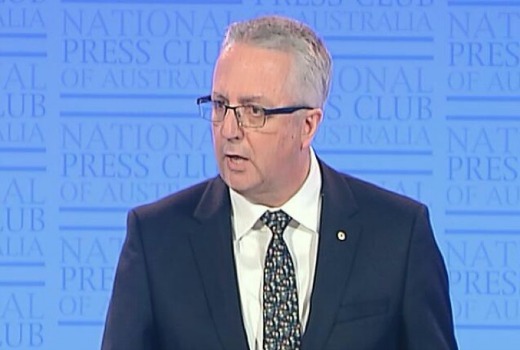 The ABC explored a “friendly merger” with SBS under its former managing director Shaun Brown, sharing office support and studio space, but the idea was rejected by the SBS Board, managing director Mark Scott has said.

Speaking at the National Press Club today, Scott recalled conversations with Shaun Brown, who was managing director of SBS from 2005 – 2011.

“Some years ago, towards the end of his term as SBS Managing Director, Shaun Brown and I had a number of conversations about how a peaceful merger might work. One that would safeguard a distinct identity and remit for SBS and allow the public broadcasters to be more distinctive, in clearly delineated spaces – with no overlap,” he said.

“No bidding against each other, schedules developed side-by-side to maximise specialist audiences, using studios more efficiently. And shared back office support that would deliver economies of scale. We felt we could have come up with a public broadcasting proposition for Government that worked in the interests of audiences, the taxpayers and the broadcasters. A shared solution. Not a takeover, but a friendly merger in the interests of the owners.

“But it wasn’t to be. The idea was rejected at the SBS Board level and Shaun wasn’t given license to pursue the conversation further. It ended there.”

“The paradox of the age of plenty is that we now have so much more – more to watch, more to listen to, more to read – and a post-Sopranos world so rich in quality television that not even binge watchers can keep up with it,” he said.

“Yet amidst all this richness, the share of quality Australian content is shrinking, overwhelmed by the flood of global content on multichannels, pay tv and the new SVOD services. It is one of the mixed blessings of being a country of 24 million speaking a language that 750 million others speak.

“In entertainment, information and news – the impact is evident. Fewer journalists in smaller newsrooms. Regional shutdowns with the loss of local voices. More cooking shows, home renovations and celebrities in jungles. Reduced investment in quality television production that informs and enriches Australian culture and identity.

“Shane Warne drinking a rat-offal smoothie on prime-time TV is possibly just a sign of the times: an example of one answer to the question of how commercial media might best build shareholder returns.

“It’s inevitable short-term thinking, driven by a market pressure to produce the highest return for the lowest cost in the fastest time.”

With the ABC facing its triennial funding in the May budget, Scott was keen to underline the importance of government funding.

“A well-funded ABC is one sure bet in an uncertain, unstable media world. It is the way of ensuring that the Australian conversations, culture and stories that shape our sense of Australian identity, are present in the mix. Available free-of-charge in every Australian home,” he said.

“A way to guarantee a steady stream of quality and innovative programs and services that produce a social profit of enriching and informing citizens, rather than simply seeing audiences only as consumers.

“Isn’t that one of the strongest reasons for having a public media service? This is what the public expects of the ABC. It’s why they support it – and want it properly supported.” 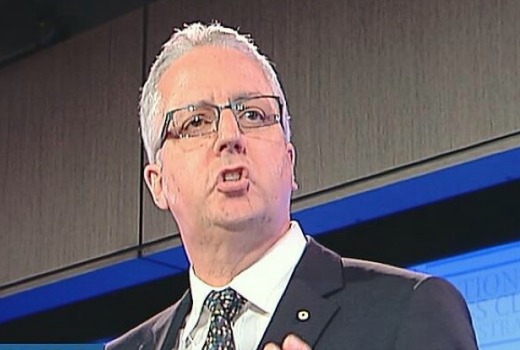 He noted a modern ABC had come a long from being “a dithering, timid, old fuddy duddy” -remarks Senator Jim McClelland made to a Senate Standing Committee some 40 years ago.

“Some of the innovation and new services have been expressly funded by Government, in response to submissions by the ABC. That’s how we delivered the children’s channel, ABC3; how we significantly expanded our drama slate; how that great regional Australia project, ABC Open, came into being,” he said.

“But many of these other new services such as ABC News 24, iview and nearly all our digital activity over the past decade have been funded from within the ABC’s existing budget, without one additional cent from taxpayers. The shift to digital is both necessary and it’s expensive.”

But he also took aim at some of ABC’s very vocal opponents, notably within media and government.

“Given the ABC’s popularity, distinctiveness and importance, I’m surprised how aggressive some political opponents of the ABC continue to be,” he continued.

“I am not particularly worried about newspaper polemicists, shock jocks or even advocates from think-tanks who, while calling for the ABC’s abolition as an irrelevance, rush to be on the ABC or even campaign for their own ABC programs. That’s their business.

“The response of some politicians to the ABC on the other hand is important, because when it comes to the ABC, they have real power. And you would have thought politicians would be more focused on what the public thinks of a public institution, so intrinsic to the public good.

“The ABC is popular, but it’s not perfect. Flawed at times, with mistakes triggered by the tyranny of live microphones or rushed judgments. Occasional blind spots, misreads of public taste, stories overlooked, or perspectives not considered. At times we make mistakes that give our critics a very easy ride.”

Scott also rejected the notion that a future ABC might engage in advertising.

“The ABC has commercial activities now and will continue to have some. But they make a very minor net contribution overall. I can’t envisage a plan to put advertising on ABC platforms. I’m pretty sure any attempt to do so would trigger public outrage, which would only be trumped by outrage from Australia’s advertising-dependent media players,” he suggested.

“And the evidence on the subject from around the world is overwhelming. When public broadcasters start advertising – Governments gradually withdraw their funding and advertising increases to offset this. Then, programming that once distinguished the public media from commercial media diminishes – as does the public broadcaster’s relevance and importance as well.

“The only way the ABC will be strong and relevant in the future is with the Government’s adequate financial support.”

“Are the ABC and SBS delivering the best return on public investment?”

Turning to further suggestions of mergers with SBS, he said SBS is now very different to what it once was.

“Increasingly, the ABC and SBS have tripped over each other, as each strives to meet audience and programming needs best, to maximise audience engagement. At times we’ve even bid against each other for programs and content – and there have been scheduling frustrations as well.

“This has increasingly been the case as SBS has moved away from multi-lingual programming on its main channel in recent years as it pursues advertising revenue. ABC 2 and SBS 2 are not highly distinctive offerings in prime-time, particularly since SBS 2 strategically moved to a schedule dominated by English and American acquisitions. Although there was no bidding contest, SBS was upset the ABC showed the Asian Cup football – our top-rating TV program of 2015.

“In isolation, these may be rational decisions – and commercial decisions – but together are the ABC and SBS delivering the best return on public investment? And how do you protect and preserve the special role each broadcaster plays?”

“The ABC and SBS have worked together more closely in recent years – on transmission deals and other areas of joint procurement of services. We invited SBS to join the ABC in our new facilities in Melbourne. But there are limits to what can be achieved as totally separate and independent entities.

“By coming together, SBS and the ABC could still offer distinct brands under distinct charters. But it could be done without an entire separate back office, stand-alone buildings, studios and technology, IT, legal, finance, HR and corporate divisions – or a separate Board. We could spend more of the funding serving audiences.”

But he also rejected suggestions a merger with SBS was because the ABC has failed to meet its own efficiency measures.

“This is simply incorrect. The ABC has committed to delivering the $250m demanded by Government and we are on track to do so,” he insisted.

“I raise it because it is a real public policy option that could preserve services and distinctiveness whilst delivering real savings for investment in the broadcasters.”

Scott departs ABC in May after two terms as Managing Director.

“I have loved being Managing Director of the ABC, but felt strongly that two terms marked the right time to leave, both for me and the ABC.”

– One Sure Bet: The Future of Public Broadcasting, Mark Scott.

Danger Mouse back at breakneck speed