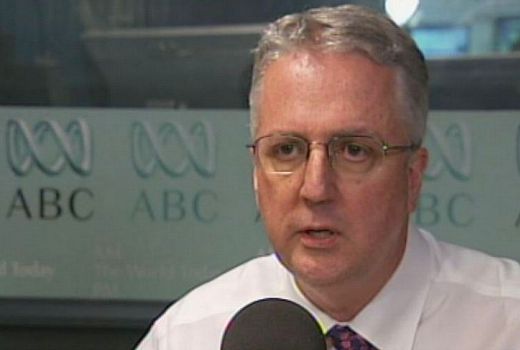 Outgoing ABC Managing Director Mark Scott has told a Senate estimates hearing that it was a matter for government whether ABC and SBS should be merged, but that SBS is less-distinctive than it had been in the past.

The discussion followed SBS managing director Michael Ebeid saying he was “disappointed” the ABC would air Foreign Correspondent at 9.30pm Tuesday this year, the same time as Dateline.

It was a “waste” for two similar programs covering international affairs to air at the same time, he said.

On the question of a merger between the two broadcasters, Mark Scott said today, “I think it is a matter that is worthy of investigation down the track.

“There have been circumstances where we have bid for programs and we feel that we have been outbid or we have withdrawn from the process because SBS has been bidding.

“And we would have argued that those programs were core to the charter and the track record of the ABC.

“SBS was created well before digitisation, well before digital television … it’s an analogue solution in a digital world,” he said. “When Foxtel wants to run new discrete channels, they don’t create entire new networks around it.”

SBS has fiercely protected its independence as a broadcaster and argued the cultures it represents extends beyond ethnic groups to others less-represented in media. Lobby group Save Our SBS has also suggested its content has become broader to attract advertising at the expense of being a specialist broadcaster.

Mark Scott said, “I suspect that the SBS of today which is more ‘general interest broadcasting’ means the distinction between the two broadcasters is not as [strong] as it once was.

“For example, I think it’s true to say on any reckoning that there is far less subtitled content on its main channel than 20 or 30 years ago.”

In 2014 outgoing SBS chairman Joseph Skrzynski said, “In the business world, we know there is a very simple law that applies to mergers: the larger entity culture smothers the smaller. The ABC is over four times larger than SBS in terms of staff and funding, and so you would expect ABC culture to become dominant.”

Over the last five years the annual TV Tonight Audience Inventory has asked readers whether “Merging Public Broadcasters” is a pressing issue, and overwhelmingly readers have indicated: “Not Important.”

Jack Irish heads off the page