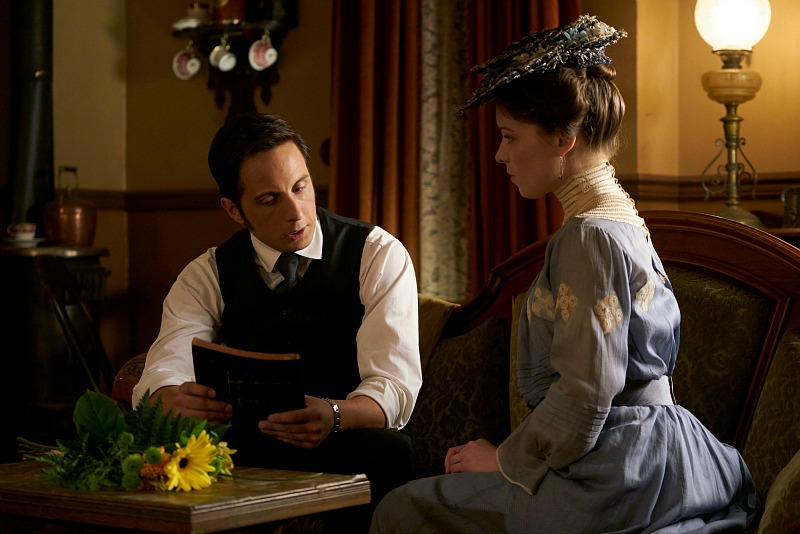 If George Crabtree had had his way, Lucy Maud Montgomery’s beloved novel would have been called Dan of Green Gables.

Monday’s rollicking MM episode, “Unlucky in Love,” had a lot going on in it, what with a murdered husband, his bride among those accused in his death and Roland the cutest baby in primetime TV. Add to that a visit by Lucy Maud Montgomery and Lori Spring’s script was totally packed. In some ways that’s too bad, as seasoned actors like Leslie Hope and Mag Ruffman had to make due with limited screen time because of the massive LMM-George Crabtree B-story. An embarrassment of riches, I guess.

The latest real-life character to make their way into the lives of Murdoch Mysteries was none other than Lucy Maud Montgomery (Alison Louder), who signed up for George’s creative writing class because she’d just begun putting pen to paper on the life of a red-haired, freckle-faced girl. Trouble was, George didn’t think her story was exciting enough—or that it should even be a girl in the lead role. His suggestion that she make it Dan of Green Gables—and amp up the drama by inserting ghosts into the story—was enjoyable enough, but alleging LMM reworked the character to reflect George’s foundling background and “flights of fancy” imagination was just too good. (Did anyone else cheer when George got his smooch on with her?) It was, therefore, a wise decision by the producers to include a disclaimer the storyline was all in good fun and George didn’t really influence Maud’s tale because, well, he’s not a real guy. (As an aside, Anne of Green Gables is top of mind lately, what with YTV’s upcoming TV movie and CBC’s own Anne project in the works.)

Alas, despite Arwen Humphreys fans tweeting #MargaretMonday over the weekend, we were left with a bare few minutes of Toronto’s newest wedding planner. It’s always great to see Brackenreid’s spunky better half verbally sparring, but it all came to an end far too quickly. The lineup of potential suspects in the groom’s murder—the driver, the florist or the electrician—and eventual mastermind of the whole thing quickly pushed Margaret to the wayside. Fingers crossed she’s got more scenes coming before the end of the season.