License to laugh at black humour 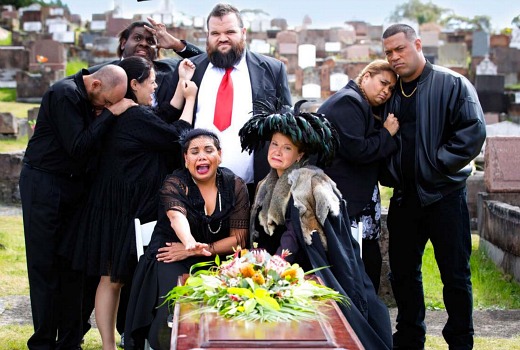 When is it ok to laugh at an Indigenous joke and when isn’t it?

If it’s in Black Comedy, you have license to laugh with all of it. And if you occasionally feel a bit uncomfortable, there’s even something in that too.

That’s the word according to ABC writer performers Aaron Fa’aoso and Nakkiah Lui.

“The great thing about comedy is that your reaction to it is often so visceral. If you laugh, (perhaps) we don’t laugh,” suggests Lui.

“I don’t think we don’t put stuff into the public that we feel is off limits. If someone who is non-Indigenous finds something uncomfortable about the show then they have to think why it’s uncomfortable for them.”

The series, described as being ‘a sketch comedy by blackfellas for everyone,’ explores what it means to be Indigenous in contemporary Australia. The core cast of 6, most of whom are also writers, now features two new faces: Adam Briggs and Ian Zaro.

“It’s narrative–driven this time, with more storylines, more substantial sketches. Each episode has a spine following the journey of a particular sketch,” Fa’aoso explains.

“It’s quite meaty this season and maybe a little bit unexpected.”

“As an artist on the show, my own personal challenge was to take what we don’t laugh about, and laugh at it. So I think we’re pushing our own lines,” adds Lui.

The first season unveiled such characters as ‘The Real Housewives of Narrowmine’, local unit Blakforce and Townsville gays ‘The Tidders’ with their catchphrase ‘What’s this then, slut?’ All return this season.

“The beauty of a first season is that no-one expected it. It resonated so successfully and we created a lot of surprises,” Fa’aoso says.

“‘The Tidders’ resonated exceptionally well, embraced by not only the domestic audience but also thanks to YouTube internationally as well. It’s had over 7.4m views. Stick that one in your peace pipe!

“We already knew we would have a black audience, but ‘The Tidders’ have transcended demographics and different levels of society. From QCs and judges to people on the street.”

“A friend of mine in America translated ‘What’s this then slut?’ into Apache. We were so stoked!” adds Lui.

Prepare for new characters to be unleashed.

“Uncle Doctor is a supposedly traditional healer who cures everything with Vicks VapoRub, flat lemonade and vinegar,” says Lui.

“He gets called before the Medical Tribunal Board for malpractice.”

The show even takes potshots at itself, with a sketch about the writing of its own show.

“There’s a new writer on the writers’ team called Ray on parole in an ABC Close the Gap program that they do with the Department of Correctional Services.”

“There’s the Special Coconut Unit, which is an undercover unit of Blakforce,” adds Fa’aoso. “The Elders is a homage to The Godfather and there’s a battle of Welcome to Country.”

“It’s a much more mature show in the second season. It’s different and unexpected, but I think it’s better,” smiles Fa’aoso.

“And we get to laugh all day.”