Home›U.K. Shows›Keith and Paddy: ‘We worried we wouldn’t be able to do the Dirty Dancing lift again!’

Keith and Paddy: ‘We worried we wouldn’t be able to do the Dirty Dancing lift again!’

Keith Lemon and Paddy McGuinness are back to recreate some of their all-time favourite movies in ITV's The Keith and Paddy Picture Show. Here, the boys talk tight costumes, superstar injuries and THAT iconic dance move...

Keith Lemon and Paddy McGuinness had the time of their lives filming their new spoof movie series, The Keith and Paddy Picture Show…

How did the idea for The Keith and Paddy Picture Show come about?
Keith: “Back in 2009, when we performed (I’ve Had) The Time of My Life from the film Dirty Dancing on Let’s Dance for Comic Relief, we came up with the idea of doing a TV series where we’d ‘recreate’ some of our favourite films. Dirty Dancing is the first episode of this series. We were worried we wouldn’t be able to do the famous lift again – it was eight years ago!”
Paddy: “We’re not poking fun at these films; we love these films, so we’re recreating them as fans. There’s a narrative running through the show where it cuts to us talking about what you’re going to see next, why we included certain scenes and why others were cut. It’s all knitted together really well.” 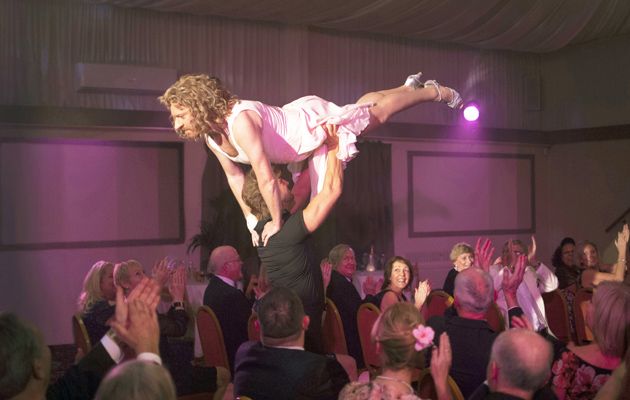 Star Wars: Return of The Jedi, Jaws, Rocky and Ghostbusters are the other films you’ll be recreating. Were there any particular challenges?

Paddy: “Well, with Star Wars: Return of The Jedi, we didn’t want to get sued by creator George Lucas, so we had to make lots of changes. For instance, you can say ‘Chewbacca’ but you can’t have the name ‘Chewbacca’ written anywhere. So, in the end credits, all those names have ‘Copyright Infringement’ stickers over them.”
Keith: “Yeah, Luke Skywalker had to be ‘Luke Spaceman’!”

Singer Robbie Williams and presenters Ant and Dec are among the guest stars helping you bring these films to life. What will they be doing?
Paddy: “Robbie plays Egon in Ghostbusters and Ant and Dec are Ewoks in Return of the Jedi. All the really meaty stuff we gave to proper actors like Stephen Tompkinson, Michelle Keegan, Anna Friel, Sarah Parish and Will Mellor. They all played it dead straight and totally got into it, so we could just mess about around them.”
Keith: “I found it really difficult working with Myleene Klass in Jaws because she was so hideous to look at in her bikini!”
Paddy: “In Ghostbusters, Robbie actually hurt his back coming down the fireman’s pole. We filmed that just before he was due to be a guest judge on talent show Let it Shine and we read in the press afterwards that: ‘Robbie Williams has pulled out after injuring his back’. That was because of us!” 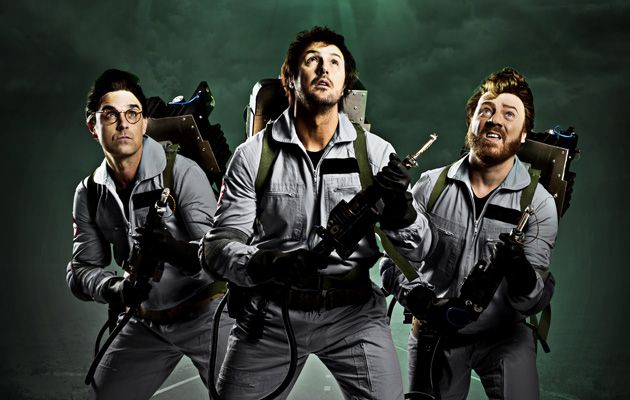 There’s a lot of dressing up in this show – were any of the costumes or prosthetics uncomfortable?

Keith: “I like the pain! He doesn’t!”
Paddy: “The C3-PO costume was just horrendous… they literally sealed me into this metal shell. I couldn’t take it off because I couldn’t move my arms; I was in it and that was that! I couldn’t get the Darth Vader costume off either – luckily there was a little wee-hole!”
Keith: “Paddy also had full Bill Murray prosthetic make-up on for Ghostbusters – but he ripped it off. I kept my fake nose on for days.” 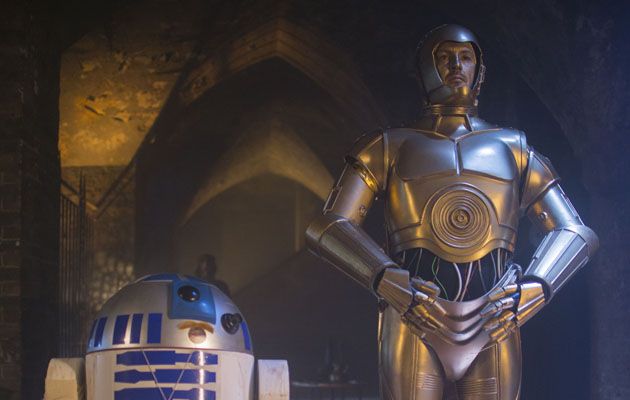 Do you already have ideas up your sleeves for future series? And what guests would you like to appear?
Paddy: “We’ve got ideas for a Christmas special, so all classic Christmas films together in one episode. Then, for Halloween, we’d do all the classic horrors.”
Keith: “Whatever film we do next, it would be nice to have a cameo from an actor who was actually in that film. But me and Paddy would obviously still have the main parts – it’s not called Paddy and Robert De Niro’s Picture Show!”

The Keith and Paddy Picture Show starts on Saturday May 6 at 9.15pm on ITV.

Next on Coronation Street: Maria turns on ...