Julia Morris credits her own ‘house husband’ for her career 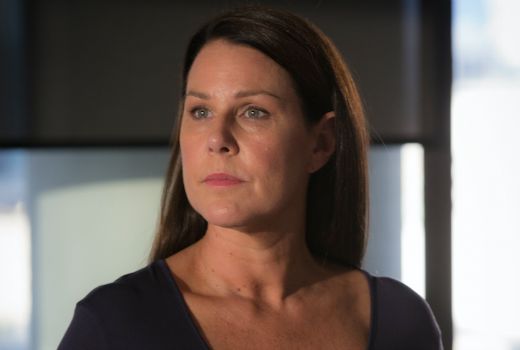 “It’s a forever-changing landscape, the role of the house husband. It takes a certain man to do that job,” says Julia Morris.

“They have the confidence to embrace what has in the past been considered a female role, but isn’t. If you’re good at it, it’s your role.

“In the past we’ve thought that women are the efficient ones. But that’s not how it is in my life!”

Not unlike her character in Nine’s House Husbands, Morris is the primary-earner in her family. Husband Dan, who also works in the industry, has had to take care of domestic duties on many occasions, learning just how difficult it can be.

“The repetitive strain-injury of doing the same thing every day nearly sent him out of his tiny mind. I assume that’s why he got back to his writing and extra jobs -to stop the monotony of what inevitably is raising children prior to school age,” she says.

“I wouldn’t be able to do half the stuff I do if Dan wasn’t taking care of the pick-up and drop-off. There’s no way I would have been able to go to South Africa!”

If the Nine series bends the truth a little, by pushing its male leads out of domesticity and into the community -or even employment- it’s a device to facilitate drama and with the show now in its fourth season it’s working well.

“There are some house husbands whose sole job is to make sure everybody gets on the road,” she continues.

“But some have a number of jobs that they duck of out to. These boys feel like they cross that boundary –although buying a pub is slightly outside that arena!

“I don’t think the show is about their jobs. It’s about the relationships between the 4 men and the various family members around them.

“Otherwise it would just be nappy talk and drop-off and pick-up.”

“Luckily I’m not teary all season.”

This season her character Gemma is enjoying less of the angst that came with the separation from Lewis (Gary Sweet) last year.

“Luckily I’m not teary all season. In Season 3 we had a big mishap with non-marital bliss. This series the couple is very much back on track. There’s still a few ups and downs for them, but they come together as a couple. Instead of individually making the decisions, they make them together,” she explains.

“So we see the fusion of them again, whereas they seemed to be working against each other for the whole of the last series. I don’t think I got to kiss Gary Sweet one on the lips once last series! Everybody was kissing him but me. This series I’m back in the nook!

“I did cry a lot last series. It was good for actor-ing, but the one thing I’ve noticed is that you don’t want to be a one-note character.”

“I should be stopping and absorbing what’s happening in life.”

When she isn’t actor-ing for Nine or hosting for TEN, Morris is still focussed on her life calling in comedy. From next week she begins a 6 city tour of her stand-up show “I Don’t Want Your Honest Feedback.” The show looks at our obsession with constant online contact, and learning how to worry less about other people’s opinions.

While she runs her LadyJMo Twitter account, Morris is reluctant to read too much social media and admits it can be time-consuming.

“There will always be someone who doesn’t like it and that can be damaging. You can go down the rabbit hole of reading that people don’t like you,” she says.

“I tend to feed it but I don’t read it. I do try and answer it so people don’t feel (left out).

“But it steals a lot of time. I’m trying to wean myself off because the overload on my brain is taking in too much information.

“I should be stopping and absorbing what’s happening in life. As a comedian and a performer I’m not going to be learning much reading that phone all the time.”

“Blessed trinity of a show”

Meanwhile, she is grateful for the mix of acting, hosting, comedy and family. There have even been Logie nominations along the way and another trip to South Africa is on the cards for TEN. With her infamous “75 years in the biz” and a career resurgence thanks to Celebrity Apprentice, Morris gives the impression of never taking for granted the long days and distance that comes with going where the work is.

“We do some pretty full-on hours: 14 hours a day 5 days a week. I’m sure I’m prone to the whinging at different times. But it’s always nice to remember how many Australian actors there are, and how many have jobs. So it’s a bit disingenuous to whinge about the job we’ve got,” she adds.

“We’re in what feels like the blessed trinity of a show that does well, that the network likes, that the audience likes, that we like. Those elements don’t always come together.”

MusiquePlus relaunches, with music plus much more!! ...