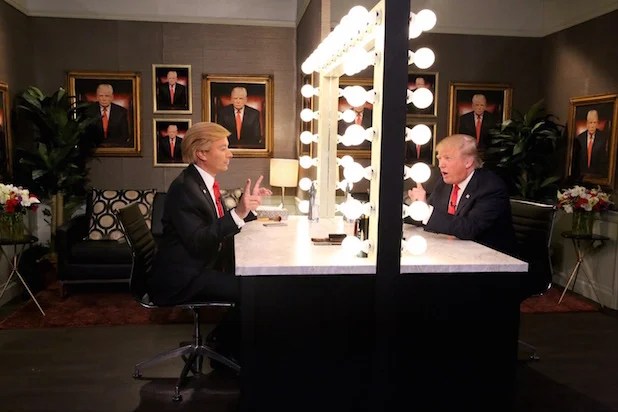 THE TONIGHT SHOW STARRING JIMMY FALLON -- Episode 0327 -- Pictured: (l-r) on September 11, 2015 -- (Photo by: Douglas Gorenstein/NBC)
“I’m a like Greek God that just took a bath in a pumpkin spice latte,” host says while simultaneously impersonating GOP frontrunner and interviewing him

“Let’s be honest, Fallon’s a lightweight,” the fake Fallon-Trump said. The real Donald responded: “Me interviewing me, that’s what I call a great idea.”

How are you going to create jobs in this country?” Fallon-Trump asked. “I’m just going do it,” Trump said assertively.

“Genius!” Fallon-Trump shot back. “How else do you plan to help the middle class?” he followed up.

“Look–I’m really rich,” Trump said, saying we need to cut corporate taxes and cut spending, but unfortunately for him Fallon-Trump was mimicking Trump’s hand gestures. “Sorry, I wasn’t paying attention, I was too busy looking at my beautiful reflection–I’m a like Greek God that just took a bath in a pumpkin spice latte,” Fallon-Trump said

Fallon-Trump concluded the interview by asking the question on everyone’s mind: Is Trump selecting Gary Busey as his Vice President?

“I love Gary, he’s fantastic, but more of a Supreme Court Justice in my opinion,” Trump said about Busey, revealing he’ll probably select Kanye West as his running mate.