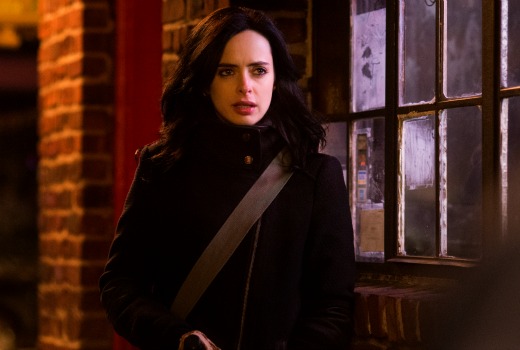 Another super-hero series in Jessica Jones? Not quite.

It may be a Marvel title, based on the comic book Alias, but don’t expect to see capes, masks or action aplenty. This Netflix series leans more towards dark drama with psychological and heightened elements than more familiar super-hero terrain.

Jessica Jones (Krysten Ritter) is actually past any super-hero use-by date. While she still possesses skills beyond the reach of most humans, they are suppressed as she ekes out a ‘normal’ existence. Indeed, given the history they represent they are almost treated like a character flaw.

Instead Jessica Jones makes a living as a Private Detective in the wintery, bleak surrounds of New York City. She’s a loner in a run-down apartment, trailing men having affairs for routine clients. Invariably when she gets to the bottom of a case her clients can either keep denying the truth or do something about it, as an introspective voice-over reminds us.

A pallid Ritter is brooding but tough, manoeuvring in shadows dressed in leather jacket, scarf and jeans. Her junkie neighbour Malcolm (Eka Darville) is but one of several irritations that impose on her daily desire to close a case and exist unshackled.

High-powered lawyer Jeri Hogarth (Carrie-­Anne Moss) -a role originally conceived as male in the comics- is arms-length from Jessica, hiring cases for her. What makes her most interesting is her sexuality.

Into Jessica’s world lands the case of a kidnapped young girl, a victim of her nemesis, Kilgrave (David Tennant). It’s not clear what has transpired between them, suffice to say it has damaged our heroine to the point of flashbacks and memories that vex her. The trail of the case leads her to bar owner Luke Cage (Mike Colter) and an attraction is ignited. With an inter-racial relationship, this marks another sign that the series is looking outside the square rather than within it.

It is 18 minutes into the first episode before any reluctant super-human strength is evident (I won’t give it away). Short on explanations (including how it was acquired, or if it is one of several), the story quickly moves back to the procedural. Indeed, you could be forgiven for forgetting you are watching the Marvel brand. Similarly, Kilgrave remains ominous and off the grid, barely visible by the end of the second episode. David Tennant looks like he will have plenty of fun with this one…

Aussie Rachel Taylor plays talk show host Trish Walker, whose family adopted Jessica as a girl. But whilst she is a confidante to our loner hero, theirs is a tenuous relationship.

Visually Jessica Jones lurks in a bleak corner of Hell’s Kitchen, devoid of rich colours, bitten by an icy winter and full of disconnected city dwellers. There are heightened flashes of vibrancy associated with its elusive fantasy elements which writer Melissa Rosenberg (Dexter, The Twilight Saga) teases. Early episodes are more focussed on setting up character relationships and series arc than sugar-hit action sequences.

Krysten Ritter impresses as a damaged, anti-superhero with history she cannot summarily shake-off. Blame Kilgrave for all of the above. The very muscular Mike Colter looks born to play the towering Luke Cage and more will unravel on his contribution. With it’s strong female characters I would expect a fitting fanbase to follow, including amongst the gay community.

Come for the character, not the super-hero, and Jessica Jones will draw you closer.