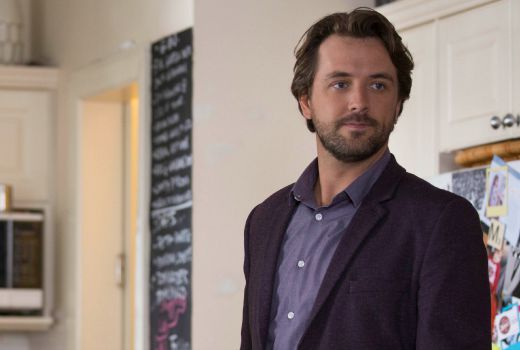 But while he is known as a host on The Voice and an actor on the Nine drama, McMullen holds many social and political views.

In this interview conducted 2 weeks ago, he speaks his mind on a range of issues he believes is holding Australia back. And he lays the blame for all of it on the Abbott government.

“I just think Tony Abbott and his bunch of cronies are a disgusting stain on this country and an embarrassment internationally, quite frankly. So much so I don’t even really want to live here anymore,” he says.

“It’s absolutely disgusting and I’m absolutely ashamed that we have a government like that. It’s getting harder and harder to explain to people in other countries why you would choose to be an Australian.”

Having been a best man at a friend’s same sex marriage, held overseas, equal rights is an issue close to his heart.

“Most of my friends are gay and a lot of them have moved overseas to countries where they can legally adopt, have surrogates or be recognised as a union,” he explains.

“This government will be looked at with the same level of disgust as abusers of human rights 60, 70 or 80 years ago. Whether it’s against black equality, apartheid in South Africa. There’s no difference. They’re just doing it in a more-clever way, now. People aren’t dying over it but the culture is dying.

“What’s really frustrating is that the majority of Australians would vote in favour of marriage equality. It’s human rights.

“It’s these idiots running the country that aren’t the voice of the country, who are making decisions on behalf of everyone else.

“It pisses me off that so many people in this country are so apathetic about it.

“I moved here when I was 11 in 1992. It was such a forward-thinking country, leagues above anyone else. All through the 90s and the early 2000s, then something happened. Oh yes, it was John Howard. The Liberals happened. And all of a sudden we’ve been regressing ever since.”

It’s not just gay marriage that has McMullen fired up.

“Our environmental policies are throwing the world back decades. We’re pushing loads of money into f***ing coal and bullshit forms of energy that are actually damaging the universe while every other country in the world is moving towards green power,” he insists.

“Why are we throwing money behind coal? Oh, look at the lobby groups behind Abbott’s campaign and all the money the coal industry is putting in. It’s sickening.”

Even Julia Gillard’s recent backflip -in which she stated she would now vote in favour of gay marriage were she still in parliament- does not win favour with him.

But it is Tony Abbott, whom he likens to George W. Bush, as the target of his fury. And there’s a shopping list of reasons why he doesn’t get McMullen’s vote.

“The environmental issues he’s causing, the human rights catastrophe that’s going on in this country with refugees who are escaping regimes. We went into these regimes, f***ed up their country, and because they are aligned with our philosophies and our lives they can’t go back to those countries because they will be thrown in jail or, worse, executed. So they try and escape to a better country ie. Australia. We put them in prison or worse, where we put the scunge of society. Where we put convicted rapists, child molesters and murderers.

“But we’re putting doctors, nurses, educated folk, who are just coming here for a better life, like the white people did all these years ago… and we’re putting them in jail. Not even jail (here) anymore, but some god-forsaken island.”

What triggered his anger was the moment Tony Abbott used a special joint Liberal-National party meeting to rule against a conscience vote on gay marriage -a move McMullen describes a “stacking the decks.”

“Everyone has a ‘She’ll be right mate, attitude.’ No it’s not. It’s time Australia wakes up and realises what a shit country this is becoming and we stamp it out before it gets beyond repair,” he insists.

“I’m usually not this passionate about things, but I’m very aware after you quote this, I will get a ton of people telling me to ‘F*** off back to my own country.’ Which I get constantly.

“I’ve been here since I was 11 years old. I’m Australian.

“I’ve lived here my whole life yet because I have a slight accent, constantly on Twitter –and it’s always the faceless (people) who would never say it to my face, obviously- say ‘F*** off back to your own country! Why can’t we have someone who is an Australian hosting this show?’ Blah, blah, blah! ‘You have to be born in a place to make it your country!’ Or ‘You have to have been here for generations!’

“If that was the case, most of the races in this country have no right to claim Australia as their own, because they don’t belong here either?” he suggests.

But McMullen also acknowledges other countries are not without criticism.

“America is a f***ed up place, don’t get me wrong. There’s a lot wrong with America: health care, education, the NRA, all these big corporations and lobbies.

“But at least there is some kind of forward-thinking and positivity. They are making steps in the right direction. And every other first-world country. But we’re going backwards.”

“The only hosting job I would do is a John Oliver, Jon Stewart-style show.”

It’s customary for talent to not express their political views for fear of alienating audiences, or even management, but McMullen takes the view that important issues need to be discussed. I ask if he has considered channelling his passion into an avenue within the media?

“Moving forward the only hosting job I would do is a John Oliver, Jon Stewart-style show. Political satire. If you can somehow get through to people and make light of the situation, it’s the best way to educate the masses. By taking the piss out of what’s actually going on,” he explains.

“That’s always been the plan in the hosting realm. In the acting realm it’s doing roles that will help educate people. Alex is a gay guy who loves his boyfriend and wants to get married. There’s nothing wrong with that. So hopefully the more characters like that on the television (will make people think) ‘Gay people are just like us! Why should we care if they get married? It doesn’t affect me at all!’

“So I’m very careful about the decisions I’m making, moving forward in my career.

“The more TV shows that can open up equal rights, environmental issues and all the things that we should be talking about to people in primetime, in the nature of a comedic show, becomes an easier way for people to digest that information, than me getting up on a soapbox and shouting.”

Meanwhile, House Husbands will address same-sex marriage in a way that seeks to entertain and educate a broad audience, through the proposal by Alex (McMullen) to Kane (Grantley).

“The relationship is moving in that direction and there’s a surrogate kid on the way. So it was the next logical step to propose. Luckily the British government isn’t as backwards as the Australian government so we are able to get married in the British Consulate,” says McMullen.

(NB: This interview was conducted before last week’s announcement to intake 12,000 Syrians)