How accurate is The Wrong Girl?

There are talent egos that need massaging, on-air shock confessions, segments designed to get males to rip their shirts off, and network execs firing staff at will.

So just how accurate is The Wrong Girl?

According to Thomas Mitchell, who worked as Entertainment Producer for The Morning Showand Daily Edition, it reflects some aspects quite well.

“Look I think we can all agree that any TV show about a TV show will use a little poetic license,” he tells TV Tonight. “That being said, The Wrong Girl has tapped into some of the more bizarre parts of what goes on behind the scenes in breakfast television. Tonally, they’ve managed to capture the healthy competitive vibes that occur between hosts.

“I smiled when The Breakfast Bar’s male host, Eric (Craig McLachlan), mispronounced the word ‘seminal’ much to the delight of his co-host Erica (Madeleine West). It’s party of the healthy competition between hosts that occurs day in, day out.

“Meanwhile the control room banter was also pretty spot on. You haven’t heard sarcasm till you’ve sat in a control room while a self righteous guest has lectured on a topic they don’t know much about. ‘Oh, here we go’ is almost a catchphrase in TV.”

In some areas Mitchell says morning television is even more extreme than that depicted in the TEN show.

“A real control room is louder, crazier and more stressful than anything I’ve seen in The Wrong Girl,” he suggests.

“In episode four, when the two hosts go at it over a controversial issue, before they both storm off set, Lily barely raises her voice. In reality, there would be people shouting, phones ringing and some serious anxiety unfolding.

“One thing they did get right was the intervention from above. If a segment goes off the rails it’s only a matter of time before the EP is on the phone demanding a hard wrap. As in, wrap this up. Now!

“The Wrong Girl also delves into the awkward world of balancing host egos. It’s a tricky topic but I (thankfully) haven’t witnessed the kind of vanity Eric displays. At the same time, hell hath no fury like an embarrassed host.

“Eric’s misguided speech on same sex parents in episode four was a wayward step and while the producer wasn’t to blame, he certainly found himself in the firing line – talk about art imitating life.” 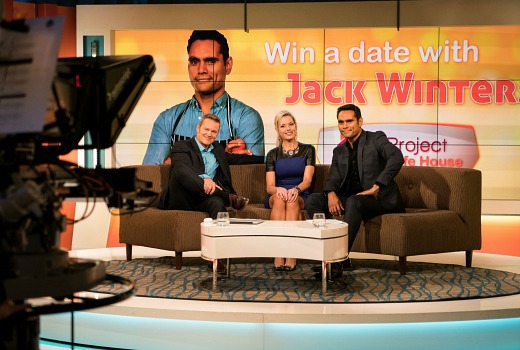 However another TV producer, speaking anonymously, had some concerns.

“I understand that the show isn’t about TV production, it’s a romantic comedy / drama. In the same way that doctors would look at Offspring and complain it’s not realistic I watched Wrong Girl and thought it’s a great representation of what people on the outside think TV is like… but not close to reality at all.

“I can’t believe Jack the Chef is getting such strong prominence on The Breakfast Bar – he must have minute by minute ratings that rival Graham Kennedy!”

Mitchell noted that the while the show overplays office chat, it does a good job of capturing the vibe of a production office.

“There is lots of chatting over coffee, meeting in the kitchen for a chat, elevator chat. There’s lot of chatting. Most producers are so busy and under the pump that a chance to chat is as rare as finishing on time,” he said.

But he added, “Ultimately in a world where truth is stranger than fiction, The Wrong Girl mostly gets it right, which is good enough for me.”

The season finale of The Wrong Girl airs at 8:30pm tonight on TEN.