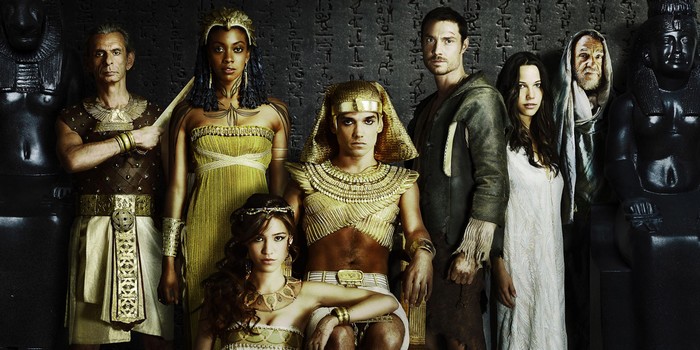 The world of ancient Egypt -- a time of magic, Pharaohs, gods and thieves -- lives again in HIEROGLYPH

An exciting action-adventure series from creator/executive producer Travis Beacham ("Pacific Rim," "Clash of the Titans"). When a dangerous scroll, The Book of Thresholds, is stolen from Egypt's most secure vault, master thief AMBROSE (Max Brown, "Beauty and the Beast," "MI-5") is plucked from prison to track down the perpetrator. Having spent the past five years in the darkest of pits, Ambrose quickly learns that his prison cell might be safer than the dangerous new world in which he finds himself: Atum, the empire's capital. Ambrose must answer to Pharaoh SHAI KANAKHT (Reece Ritchie, "Prince of Persia: The Sands of Time"), a god in the flesh, a young ruler with a cool charm and a violent, frightening temper. The question for Ambrose is not whether he can trust his new boss, but whether he can trust anyone. Also stalking the halls of the palace is NEFERTARI KANAKHT (Condola Rashad, "Smash," "Steel Magnolias"), half-sister to the Pharaoh, whose relationship with Shai's closest advisor, MAGISTER BEK (guest star Hal Ozsan, "90210"), masks her own designs for power. Finding few leads in the palace, Ambrose's investigation takes him to the doorstep of his long-lost love, PESHET (Caroline Ford, "Lake Placid: The Final Chapter"), a magic-wielding adoratrice, a type of homespun priestess who uses her femininity as a portal to the gods...for the right price. Peshet was the keystone in Ambrose's merry band of thieves, an impressionable youth with great knowledge of magic, a woman who never saw a lock for which she didn't have an unlocking charm. Five years later, Peshet has left her old life behind in a pious pursuit of divine contact. Ambrose's journey also leads him to old friends, such as VOCIFER (John Rhys-Davies, "The Lord of the Rings: The Fellowship of the Rings," "Raiders of the Lost Ark"), a peddler of mystical wares and Ambrose's mentor. But he also comes face-to-face with foes both old and new, from RAWSER (Antony Bunsee, "EastEnders," "Sex and the City 2"), the Pharaoh's captain of the guard, who imprisoned him five years ago; to LOTUS TENRY (Kelsey Chow, "One Tree Hill"), a palace concubine and spy for a rival kingdom. As Ambrose unravels the mystery of The Book of Thresholds, he begins to see the extent to which sorcery has seeped into the halls of power in ancient Egypt, and how close it is to causing this great civilization's downfall.