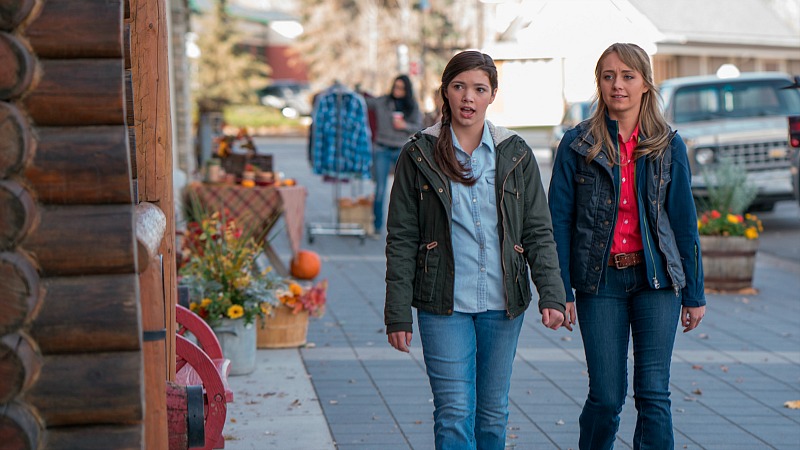 “Risky Business” dealt with some very serious horse and human issues on Sunday night, but can we take a moment to revel in the crowning of Llama Boy? Heartland has featured storylines about the evils of social media in the past, so it was nice have Georgie’s gaffe at allowing Olivia into her public mailbox turn out all right. Rather than let what I’ll call “The Spitting Incident” derail Adam’s quest for class president, he and Georgie turned it into a political success, giving him the win and handing Olivia a defeat. (Olivia’s cut eye at Georgie was so worth it.)

Of course, Georgie’s plot to turn spittle into votes wouldn’t have happened at all if not for the return of Tim’s former flame, Janice. Yes, she helped the grade-schoolers, but threw Tim and Casey’s whole relationship into the toilet. I’m glad her horse, Danger, is going to have surgery to cure Wobbler’s Syndrome, but it meant Casey and Tim had a sobering heart-to-heart. (That chat was preceded by one of the greatest family dinner scenes ever, when Casey and Janice double-teamed making fun of Tim.) By the end of the chat, Casey admitted she was afraid she couldn’t live up to Tim’s relationship expectations and it looks like he might take that job in Dallas. Will Chris Potter really leave Heartland? Doubtful, but the brake pedal has been put on Tim-Casey for the time being.

Janice’s visit threw Cassandra and Amy’s lives into disarray too. The pair teamed to diagnose Danger and in the process confirmed Cassandra is pregnant with Caleb’s baby. Unfortunately, the well-meaning Caleb thinks Amyis with child. I’m sure that’s going to lead to highly comic/dreadfully dramatic scenes in the future. Note to Amy: always throw out the pregnancy test ASAP. You never know who might find it.

Speaking of finding things, Katie found herself in hot water with Jack. With Lou away, the littlest Fleming scooped his cell phone and ended up breaking the screen. Luckily for her, she’s got the best grandfather ever; Jack used the opportunity to snag a plate-sized steak from Lisa after she accused him of losing the phone on purpose.