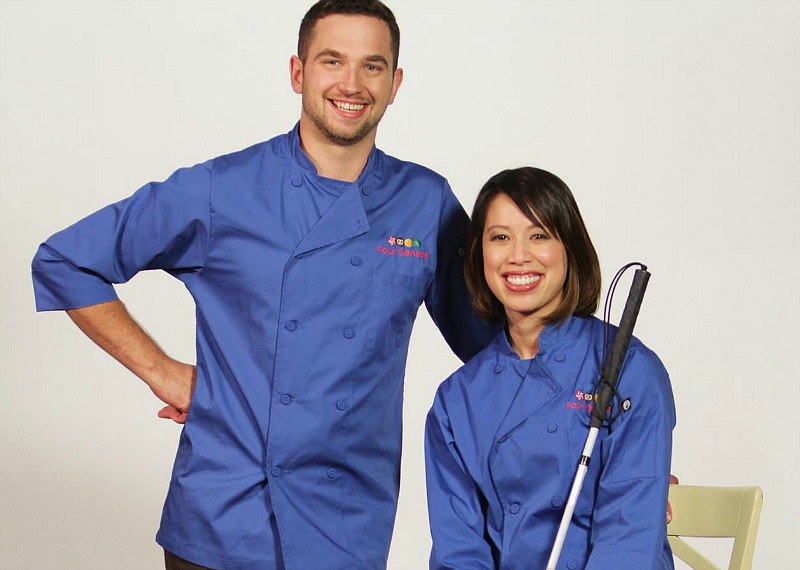 Carl Heinrich and Christine Ha are cooking up good stuff on Four Senses. Heinrich, the Season 2 winner of Top Chef Canada, and Ha, who took the Season 3 title in MasterChef, are back for Season 3 of AMI-tv’s culinary series sharing recipes with each other and celebrities while traipsing the country meeting with the folks that put food on our tables.

The two chefs—and the Four Senses crew—have hit a real groove in Season 3, returning Thursday at 7:30 p.m. ET. The most obvious thing I noticed during a set visit last fall was the confidence the two have in the TV process. Gone are the jitters I saw in the first season, replaced with an understanding of what Four Senses is, and their roles in it. Yes, the program features embedded description for those who are blind or partially sighted and closed captioning for those with hearing loss, but at its heart Four Senses is a cooking show—and a darned entertaining one.

“Christine has had a lot of experience with very big productions,” says executive producer Anne Marie Varner. “This is a little more relaxed and she gets to hone her skills in terms of describing what she’s doing in the kitchen. She’s been very good at being able to point out to our guests and Carl what the challenges are when you’re blind or visually impaired in the kitchen. Carl has really grown in his confidence working in TV and it shows in his performance. You’re seeing a completely different person.”

Celebrity guests in the kitchen include Thursday’s visitor, Chef Corbin Tomaszeski, followed in the coming weeks by CHFI’s Erin Davis, French Chef at Home‘s Laura Calder, Chatelaine‘s Claire Tansey andBreakfastTelevision Toronto’s Frank Ferragine. As for the locations Heinrich and Ha will be visiting, Prince Edward Island, rural Ontario and Kelowna, B.C., beckon for features on lobsters and oysters, butter tarts and goat milk. Varner notes Four Senses is a national program, and she wanted their location segments to reflect that. A Season 3 addition that helped elevate Four Senses is new director Arlene Hazzan Green; the Emmy and Genie award winner is pushing the cooking process to the back burner in favour of stirring the pot through conversation about cooking and accessibility.

“We needed more conversation. ‘Who are you and why are you interested in this?'” Varner says. “She’s really focusing on the performance and learning about the twist that makes Four Senses unique.”

Donald Trump: Parliament to debate whether to ...