Home›U.K. Shows›FIRST LOOK: Birds of a Feather fly out to Malta for Christmas

The Birds of a Feather cast have been filming their Christmas special in Malta and here's the first image... 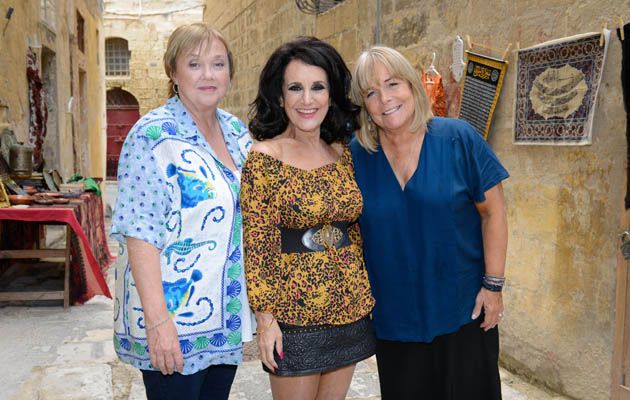 ITV has released the first photo from the Birds of a Feather Christmas special, currently filming on location in Malta.

“Us birds all together abroad can only mean one thing – mayhem!” Pauline promised us earlier this year.

The hour-long special sees the ladies fly abroad for a sun-filled adventure packed with guest stars, stunts and lots of surprises. But the big question is: Will the ladies get back to the beloved Chigwell in time for Christmas?!

During the show’s time on the BBC, it was famed for it Christmas editions and previous oversees locations include the USA, Berlin and Ireland. The last festive edition screened on 24 December 1998.

“We’re filming abroad for the first time in nearly 20 years,” said Linda.”I’m so excited, the storyline is brilliant and we’re all so looking forward to Shal, Trace and Dor going on an amazing adventure.”

Lesley added: “I’m very excited to be flying abroad again with the birds for a Christmas special. I can only imagine the capers we’re going to get up to, I can’t wait to put the nails back on and create havoc wherever we land.  Seriously though, I couldn’t be more happier to be working with two of my favourite people in the whole world.”

The episode is written by the series regular writing team of creators Laurence Marks and Maurice Gran with Gary Lawson and John Phelps.

Lesley has had a busy week during breaks in filming as she’s been busy practicing her latest dance routine for this Saturday’s Strictly Come Dancing with her professional partner Anton du Beke.