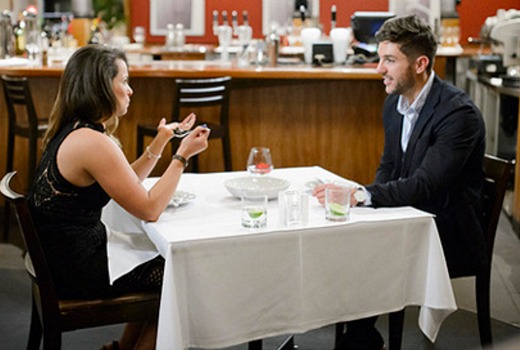 Is there anything as voyeuristic and potentially car-crash as a blind date? When a show gets matchmaking right, such as Perfect Match, The Bachelor and The Farmer Wants a Wife, it can enjoy a long run.

UK format First Dates is the first of several new dating shows hitting our screens this year, with singles so keen for romance they agree to a blind date on camera. A Sydney restaurant is the venue for this Australian adaptation, in which 5 couples have been matched according to their likes and dislikes.

The premise is fairly simple: Will they agree to a second date by the end of the night?

Yes, the singles know they are being filmed and have agreed to partake in the series. But cameras in the bathroom and moments that would normally end up on the cutting room floor will also give this a voyeuristic feel.

Cameras capture that very first moment of meeting as couples react. Is there a spark? Who is nervous? Who is disappointed? And who is faking it already? Restaurant staff greet individuals as either ‘sir’ or ‘ma’am,’ there are a few Extras and a bit of background ‘atmos’ layered on the soundtrack.

Amongst the singles, aged from 19 to 44, is a variety of upbringing, experience and expectations. There’s only minimal diversity in the early episodes I viewed, hopefully with more ethnicity and sexuality to come in later episodes.

The narrative shifts from couple to couple across the episode (these days the Observational genre pauses plots without even thinking about it). We move from an attractive couple with sparks flying across the table to a nervous wreck trying far too hard to a couple of country kids who are all agog at the trappings of a ritzy city restaurant.

There’s also the smarmy Bond-clone vacuously trying to charm his date (“I believe I have arrived”) and the young woman grilling her date on his 5 year plan. She will settle for 3.

The second episode will feature a male topless waiter, a middle-aged couple constantly talking about sex (ewww!), more hopeless romantics and a returning single who failed in the first episode. The format of First Dates doesn’t always ditch its participants at the first hurdle, allowing for us to connect with their longer pursuit (wouldn’t that make it Second Dates?). Apparently it will even allow the audience to put themselves forward if they like someone, although there was no indication of that just yet.

On a show like this, everything will come down to casting. The country kids in episode one were so endearing it was hard not to want them to click. One guy was so phony I kept waiting for his come-uppance. But another was self-narrating so much that there wasn’t much point to it all if he’s so aware of the cameras.

By the end of the night (and the guests pick up their own tab) there is an often-awkward discussion about whether to agree to another date. Thankfully it’s not strung out and we get instant answers. Trust me, when I thought I had the “yes / no” couples picked I was frequently surprised. The cameras also capture their exit from the venue -how do you say goodbye after you’ve been rejected? Totes, awks.

At 75 minutes this was probably pushing the friendship (a half hour would be better, albeit not with 5 couples) and First Dates appears to simplify one storyline for each couple, but it’s also got enough to engage the curious.

Following on from My Kitchen Rules, Wednesdays are going to be a long night over the dinner table, but I expect First Dates will do well with Seven’s core audience.