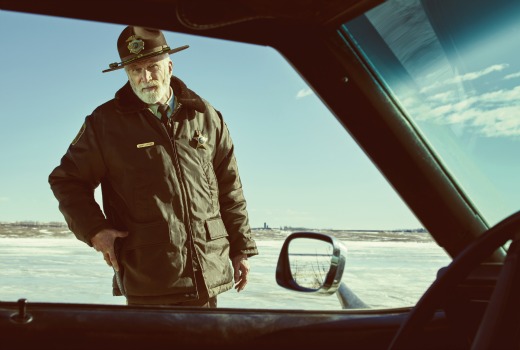 Anthology series are a wonderfully creative way for Television to think outside the box and surprise us. Hitting the refresh button is like unwrapping a new present every series, full of new toys to play with.

American Horror Story has, for the most part, utilised this with great rewards. But as True Detective demonstrated this year, it’s no guarantee of success.

The good news is the acclaimed Fargo gets it right, at least in earliest episodes. In truth this anthology is also a prequel. It’s set in 1979 South Dakota on snowy, lonely roads. It just wouldn’t be Fargo any other way. It still draws upon its trademark language, doncha know? But we are now without Billy Bob Thornton, Martin Freeman and Allison Tolman.

This season centres on a younger Lou Solverson (Patrick Wilson), who was the father of Season 1’s Molly -originally portrayed by Keith Carradine. From there, everything else is new.

But that all changes when the patriarch of a local family mob has a stroke, leaving his three sons and wife to pick up the pieces of their crime business. Youngest son Rye Gerhardt (Kieran Culkin) lights a comedy of errors fuse when he tries to blackmail a judge at a waffle diner. This quickly degenerates into a particularly violent slaughter in the episode’s most arresting scene. As he staggers from the crime more drama -and more bizarre themes- will strike.

In the strange tableau that is Fargo we also meet beautician Peggy Blumquist (Kirsten Dunst) and her husband, local butcher Ed (Jesse Plemons). But the unassuming Peggy is hiding a dark secret -any more would really be a spoiler- that will send their world into a tailspin.

Gerhardt matriarch Floyd Gerhardt (an unrecognisable Jean Smart) attempts to take some control of her sons Rye, Dodd (Jeffrey Donovan) and Bear (Australia’s own Angus Sampson), whilst a Minnesota crime syndicate headed up by Joe Bulo (Brad Garrett) is making a move on their turf.

Writer / director Noah Hawley expertly unifies his clusters with dark humour, idiosyncrasies, mystery and a tone that remains faithful to the Coen Bros. original. Amongst this star-studded ensemble, he affords them plenty of room to show they are character actors.

Patrick Wilson as Lou Solverson serves as a quiet sleuth and family man, scratching the surface of a very dark Sioux Falls. Kirsten Dunst is pitch perfect as a sweet hometown girl who cannot face reality. Australia’s Angus Sampson underplays the towering Bear, a brother in a most erratic family.

Fargo is moody, binge-worthy television, wonderfully unsettling with the unnerving feeling that something terrible could always erupt from this picturesque backdrop. On these icy tundras, who would ever know anyway?

The second season also comes with cinematic juxtaposition reminiscent of 1970s films: there are split screens, fade in / fade outs ….and don’t even try to analyse the opening scene of actors on a film shoot. Okie dokie?