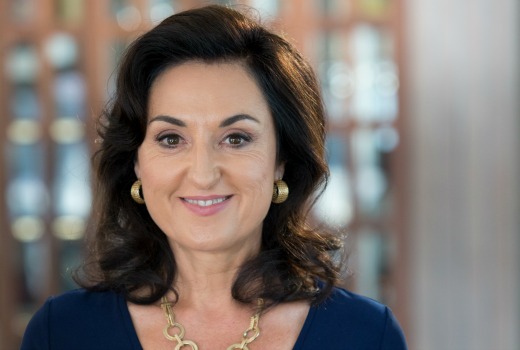 In a career spanning over 25 years Camilla Ah Kin has played more than her share of Middle Eastern and Mediterranean characters.

So much so that when the first got the call to audition as matriarch Mariam Habib on Nine’s Here Come the Habibs! she was ready to turn it down, sight unseen.

“It had a similar effect on may as it did on nay-sayers before they’d seen an episode and started the petitions,” she tells TV Tonight.

“I kind of went ‘Nah, probably not.’ But then I asked for scripts, which is always my first port of call. So I read the first 2 episodes, and also Jungle were co-producers and I was a big fan of The Moodys.

“I hadn’t read roles that required a Lebanese background like this one, ever. I’ve turned down my fair share of stories that I feel like I have already told, with Middle Eastern backgrounds that start to become repetitive.”

“I was told ‘You’re going to be doing the ethnic roles.’”

Ah Kin has performed with Bell Shakespeare, The Stables, Sydney Theatre Company and recentlyHolding the Man. Yet during her training at the WA Academy of Performing Arts, she was given stern advice.

“When I graduated I was told ‘You’re going to be doing the ethnic roles.’ I don’t know whether that was a good or bad thing, but it did mean you become a specialist,” she says.

“Whole series have gone by me because of my ethnicity.

“Or I would have to wait for refugee stories, but it does mean they end up being the broken ones, the sad ones, because that’s where we are with that story.

“But the Habibs was warm-hearted and funny and with enough politics to hold my interest…. and it was in a commercial arena.

“So it is a wonderful contrast.”

The Nine comedy hasn’t been without its share of controversy as well as politics. Before airing there were petitions calling for it to be abandoned. Now three episodes on, the show is already Nine’s brightest new star on the schedule.

“The whole controversy about stereotypes ended up being a bit of a furphy. Once people came to it they said, ‘Actually that’s not what’s happening at all.’ If anybody is having a joke made of them it’s the O’Neills –although that’s not the case all of the time because we do it to ourselves as well,” she notes.

“A very reasonable amount of improvisation got in.”

Laughing at yourself is, of course, an intrinsically Australian quality. Ah Kin says the Lebanese community is embracing the show with each passing week.

“I got out of a cab and …you kind of forget you’re on national television. The driver said, ‘Excuse me are you Mrs. Habib?’ and I said, ‘Yeah I am!” she recalls.

“A lot of the Lebanese community I’ve spoken to are really excited about it, so I want to say the negativity has become a minority, really.

“A Lebanese girl in the Actor’s Equity office said ‘You’re exactly like my aunty!’ which is great. So I like that our family is like people that they know. The really old-fashioned telltale measure of any television show is when people are talking about around the photocopier or watercooler –and they have been.

“I had no idea the ‘Lemonade’ song would take hold. It was something the boys did spontaneously in the shoot. That was encouraged, to play something out, and a very reasonable amount of improvisation got in.

“I think it’s a ringtone you can buy now!”

“The danger is you get a camel by committee”

Greenlighting a TV sitcom was also a bold bet by Nine, the first on a commercial network in decades. As Ah Kin explains, the marriage of a boutique production company, in Jungle, with a broad commercial network is a rarity. But it has struck an alchemy on screen that is making others take notice.

“The danger is you get a camel by committee, as something that is not recognisable to any of the contributing parties. But I think this has landed somewhere really good, that serves all of those masters. A lot of that is due to the director, Darren Ashton, who has done an extraordinary job,” she notes.

“It might be the first comedy Nine has done without a laugh track …she says without checking!”

With three more episodes to run in the current season, Ah Kin is looking ahead and hoping Nine’s gamble has paid off enough to renew it for a second season.

“We’re all waiting with bated breath!” she laughs.

“You will probably know before me! It’s entirely dependent on what the viewers do. But the writers are loaded with stories.

“We’re just at the beginning.”