Raunchy history drama Versailles returns to our screens for a second series this week, with Louis XIV at the height of his powers. George Blagden plays the 17th century French King and he tells us all about life behind the scenes at the Royal court.

The first series ended with Versailles in turmoil…

“Louis’s son, the dauphin has been kidnapped and also his brother Philippe’s wife had been poisoned at the end of the last series, so he feels a bit like everyone’s out to get him. To make matters worse, Philippe has walked out of Versailles. So Louis is feeling very isolated at the start of the new series.”

How does Louis cope without his brother?

“They’ve both been a huge part of each other’s life, so he feels a bit abandoned. Louis is a man who is lost and is working out how to keep the power he has attained. He’s being led astray by his mistress Montespan and he stops listening to the people he should be listening to.” 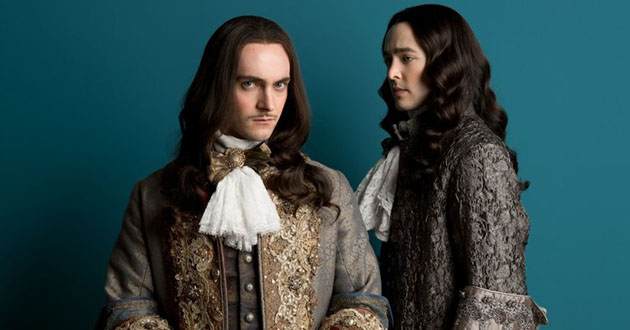 How was it to film the opening scene of the new series, where Louis walks into the lake?

“It was freezing! It was beginning of March and we shot that over five hours in the middle of the night, but the scary thing was the lake was man made so it’s just a sheer drop from the edge. The props team had to build this platform in the water for me to walk on. I was genuinely feeling where I’m going and trying not to fall down to icy depths.”

What can you tell us about Louis’s rivalry with William of Orange?

“We’ve been building William of Orange up through series one as Louis’s major nemesis and in the second series we get to see him become even more obsessed. In the end Louis feels the need to go into battle against him, when it’s not him that should be doing that. We’ve seen that Phillipe is by far the better warrior of the brothers, but Louis decides to go against other people’s advice and go to war himself.”

How does that pan out?

“It’s a chance to for Louis to face his own demons, as well as the real ones in front of him and things come to a climax at the end of the series with these two incredible men meeting. They’re both young and powerful and their meeting is a turning point for Louis!”

Were you glad to get some action after watching on from the sidelines last year?

“Yeah those sequences are great. When someone tells you to charge down a hill at breakneck gallop and remember your lines and keep the sword straight. It’s exciting.”

The costumes are fantastic, which part is your favourite?

“Probably the shoes because they have heels and I like the extra height they give me as I’m 5”10. The other members of the cast like to have a laugh about the fact that the actress who plays my wife, Marie Therese, has to wear flats!”

The show is on Netflix now, but it’s still a French production for an international market. You must have been relieved that the show was so well received in France…

“Yes we were. We did a junket in Paris recently and the difference between the junket from series one and series two was incredible. The first one was so combative. It’s weird for them I suppose because it’s their history, but an English cast. It’s like them doing a show about Winston Churchill and he’s speaking French and being played by a French man. But this time they were very engaged and wanted to know more about how the characters would grow. We were pleasantly surprised by their reaction.”

There’s a third series on the way as well…

“Yes we start filming in May. Everyone’s been making the joke that these characters lived for years and years and Louis is the longest reigning monarch in European history, so we could go on for ages. It’s up to Canal+ if they want to carry on and if they do maybe recast, because we’re getting quite old now!”

There was a lot of talk about the nudity during the first series, were you glad when that died down a bit?

“Yeah I suppose so. That’s just one element to the show though, it’s more than some beautiful people taking their clothes off, which is what some people thought it was about at the start. We’ve always maintained that it’s an important part of life at court and that sex was used to manipulate and influence other people.”

So what else can you tell us about the second series?

“It’s a lot darker this series and we see all of the characters shift and go down darker paths. The women also come into the story a lot more, which is great. For Louis s2 is a bit of a hiccup on the road to being the sun king – that’s all I’m going to say!”

EastEnders: Stacey has some sensitive news for ...