Home›U.K. Shows›Downton Abbey movie could be on the cards says actress Phyllis Logan

The actress, Phyllis Logan who plays housekeeper Mrs Hughes, has fuelled speculation that a feature film of Downton could be in the offing....

Actress Phyllis Logan has good news for Downton Abbey fans – saying the cast are all eager to bring the period drama to the big screen.

The hit ITV show came to a close on Christmas Day in 2015 but has since sparked speculation about returning with a film.

Phyllis, 61, who played housekeeper Mrs Hughes in Downton, told Good Morning Britain: “The will is definitely there with everybody involved.”

She added: “Fingers crossed that we can make it all come about at some stage. And we’d love all to get back together again and have one last hurrah.”

But the Scottish actress, who is currently starring in The Good Karma Hospital, said it would not be easy to reunite all the cast and crew in one place.

“There’s so many of us,” she said, adding: “In normal film situations you might have a core cast of half a dozen or whatever. But this is a core cast of thousands, it feels like at times. And so … herding cats?”

Her comments come after Jim Carter, who played butler Carson, hinted that a movie spin-off of the drama, created by Julian Fellowes, could be close.

Jim, whose alter-ego married Mrs Hughes in the show, previously said “nobody’s seen the script” but that the cast had been asked to keep dates free for the big-screen version.

“There’s a place in the West Country called Julian Fellowes’ head and it’s in there somewhere. I’m sure it will emerge,” he said.

Julian has also spoken of the possibility of a film, saying the difficulty was getting cast members – such as Hugh Bonneville, Michelle Dockery and Dame Maggie Smith – free. 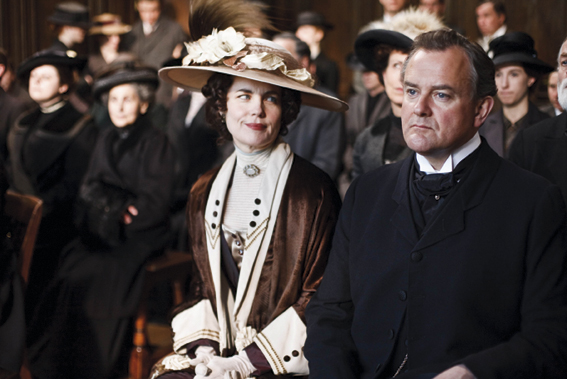 “It’s very unlikely there won’t be a film because there is an audience out there for it,” he said.

The final episode of Downton Abbey was the most-watched TV show on Christmas Day in 2015.